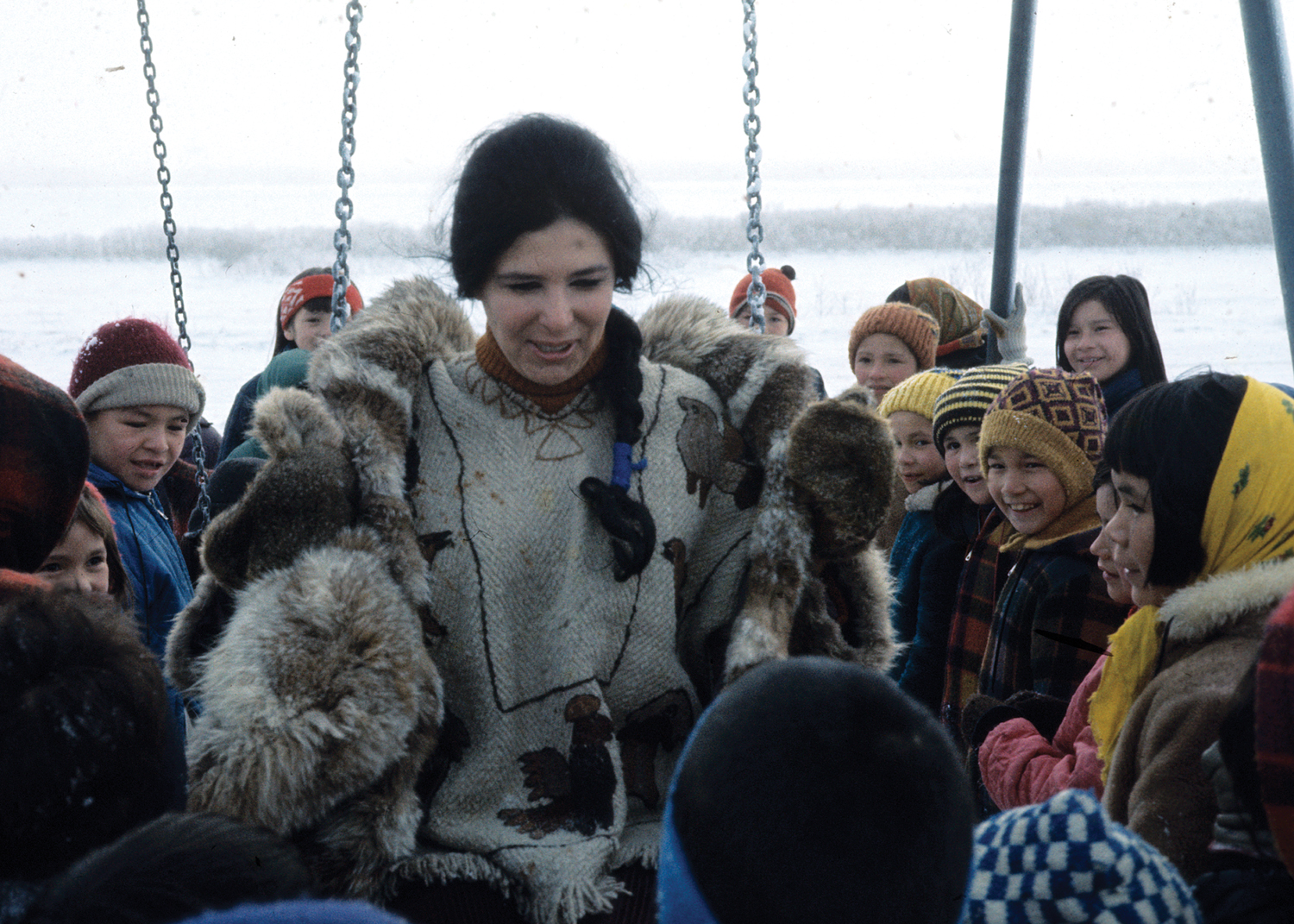 Here, how an 83-year-old filmmaker ensures the storytelling of the past will inform the future of Canada’s First Nations.

At 83, Alanis Obomsawin, an award-winning icon in the documentary film industry, is travelling non-stop to shoot her documentaries about indigenous people in Canada. Despite her gruelling schedule and the fact that she is juggling three or four films at once, she appears peaceful and quiet. Nothing in her expression hints that she is between two shoots or is preoccupied by the tragic stories she is documenting.

After the showing of one of her documentaries, Hi-Ho Mistahey!, which means “I love you a lot, a lot, a lot,” at the 2013 Toronto International Film Festival, she walked on stage and twirled in a short dance in front of an audience in awe of her.

The crowd is obviously moved by the story they’ve just watched: Shannen Koostachin, a 15-year-old girl from the distressed community of Attawapiskat in northern Ontario, campaigned for better education and schools for First Nations children. Although Shannen, who died in a car accident on May 30, 2010, did not live to see the results of her efforts, her campaign was successful and led to new rights for indigenous people over their education through Shannen’s Dream, a motion passed unanimously by the House of Commons in February 2012.

When Obomsawin and I meet at a restaurant, she says she was recently hit by a car but was luckier than Shannen.

“Nothing serious. The sun blinded the driver. All is fine now,” she explains. Her answers are careful and short. Obomsawin is used to listening rather than talking. “I love listening to people.” She pauses. “These are their lives you know,” she explains emphasizing the words, “their lives.”

Her own life began on Abenaki Territory in New Hampshire. “I grew up on a reserve without electricity. We listened to elders’ stories by the light of oil lamps.”

Eventually, her parents moved her to Trois-Rivières, Que. There, her parents became known for their ability to cure “certain illnesses.” These kinds of “services” were done underground as it was prohibited to practise traditional medicine at the time.

“Both my parents inherited that knowledge. But it is not something I like to discuss because it can be misinterpreted and mishandled by some.” Instead, Obomsawin prefers focusing on her films and talking about a wind of change she perceives for indigenous people in Canada.

As she searches the menu for a vegetarian dish, she explains, “I have never put meat in my mouth, not even as a young child.” Yet meat is central to traditional native food. “They [my parents] would try to feed meat to me, and I would spit it out. People around me used to say that I would die young. Here I am today,” she laughs.

In fact, not only is she alive and thriving in her 80s, she says that she is rarely sick or tired. “You know I am blessed to have great health and energy. I feel protected. I have been in dangerous situations, like when we film around the world under extreme conditions. I feel I have special protection.”

Asked how and why she would have such health and endurance, she simply replies: “I love my work, particularly interviewing elders and young people from First Nation communities.” However long and winding their stories may be, no matter how sad, troubling and unfair they seem, Obomsawin has never stopped listening and has never let her spirit down.

Perhaps one reason for such indomitable energy could be her love of dance, as seen at the TIFF screening. “Whether I am happy or sad, I need to dance every morning. I won’t eat breakfast but I dance.” Sometimes the music is traditional, sometimes it’s pop: “It depends on my mood. I am open to any kind of music.”

In fact music was initially the tool she used to educate others about her people. In the ’60s, she sang to schoolchildren to bring them a native perspective of Canadian history.

“The children were taught misleading stories that propagated a false image of our people and created a lot of hatred toward us. Unfortunately, it succeeded.” Her songs were telling a different side of the story. “I was not blaming the teachers – or anyone for that matter. I was simply singing about our life and our history.”

Then she sang in prisons in the ’70s “because there was a very high population of our people in prison at that time. Unfortunately, it is the same now, if not higher.”

Her transition from singer to filmmaker came when a documentary about her singing in schools aired on CBC in 1966. Producers at the National Film Board saw the piece and invited her to work for them as a consultant. She accepted but, after a short time, she realized she didn’t want to be the voice of the community. She wanted to have other First Nations’ voices heard, to allow the people to speak for themselves, about themselves. Thus her career as a filmmaker began.

Her first documentary, Christmas at Moose Factory, was made in 1971 and featured the children of the Cree community of northern Ontario as the narrators. In their Cree accent, they described Christmas through their drawings. “While most people still speak Cree, English became predominant,” Obomsawin says.

Her support of the younger generation has continued throughout her career, and she’s hopeful that they are rediscovering traditional values. “They learn to walk the land and to know the land, the way our ancestors lived.”

And beyond a deeper understanding of their culture, in recent decades aboriginal youth have also been granted firsthand knowledge of how to fight for their rights by observing their elders in battle. The 1990 Oka Crisis in Quebec, which Obomsawin documented in Kanehsatake: 270 Years of Resistance, was a turning point for all communities.

“Many people have told me, ‘We can never thank the Mohawks enough’ for their resistance. All the communities in the country have experienced the problem of land taken by next-door municipalities, and the resistance of the Mohawks has put an end to this kind of land-taking,” she says.

The hunger strike by former Attawapiskat chief Theresa Spence brought further attention to the troubled area that Shannen Koostachin tried to highlight and was an act of defiant protest that became a global phenom and, no doubt, as Obomsawin points out, inspired David Kawapit, a 17-year-old from the isolated community of Whapmagoostui in northern Quebec, five other young people and a guide to snowshoe 1,600 kilometres to Ottawa to show their support for Idle No More. Several dozen youth from different communities joined the trek along the way.

“We have seen a lot of progress in the past 40 years,” Obomsawin says, pointing out that Canadians in general, including non-natives, are also tired of injustices. “They hear what has happened in the residential schools.” Bands renegotiating with industry with a better knowledge of the law are among other great developments she sees.

As an honorary witness of the Truth and Reconciliation Commission, which concluded that residential schools resulted in nothing less than cultural genocide for the Aboriginal Peoples of Canada, she shares these few words. “The revelations we heard during the commission were very serious. The findings of the commission are extremely important, but we will have to wait and see what the government decides to do with this.” In a sad and weary voice, she adds: “We do not know.”

Seeing is first and foremost what a filmmaker does, and Obomsawin shows no sign of slowing down.

“I adore my work, above all listening to people, especially older people, about how they managed to survive,” she says. “The survivor is someone close to nature.”

She speaks with great hope of a new beginning that will be good for her people but also for Canada as a whole. “I sense that there is a realization, a recognition of the importance of [our] traditions and values and a way of being with nature and the land.”