Prince: Fans and Performers Rock the Night Away in Tribute 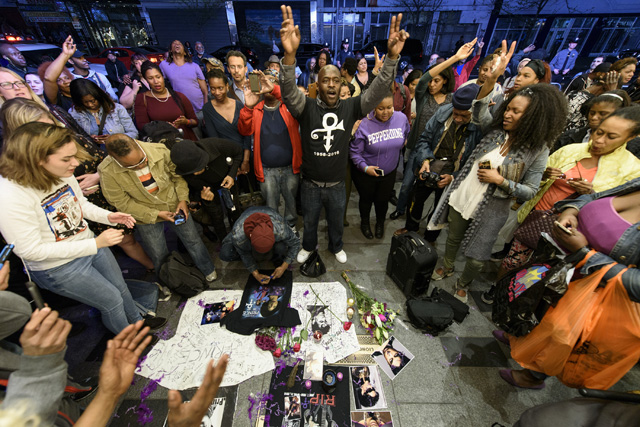 With the shocking news of Prince’s passing yesterday, fans of the legendary singer/songwriter knew there was only one way to pay tribute — bathe the night in purple and dance the evening away. From all-night parties to literary nods to one out of this world — literally — honour, below are some of our favourite Prince tributes.

Lin-Manuel Miranda and the cast of the Broadway smash hit Hamilton Prince’s “Let’s Go Crazy” at their performance last night, just hours after the news of the singer’s passing broke.

Elsewhere along the Great White Way, Jennifer Hudson, performing in The Color Purple, roused her cast mates and the audience with a performance of “Purple Rain.”

Back in Prince’s hometown of Minneapolis, fans gathers at the club First Avenue, where the movie Purple Rain was filmed, to celebrate Prince’s life and music with an all-night dance party.

Over in Brooklyn, NY, director Spike Lee threw a block party for Prince fans to gather and sing into the night.

5,000 Purple Prince Lovers Came Out To Show How We Feel About Da Man. We Shouted, Sang And Danced. It Was All Brooklyn LOVE For PRINCE. Shit Was Historic. YA-DIG? SHO-NUFF.

From New York to outer space, NASA tweeted a photo of a purple nebula to show that Prince is even moored among the stars.

A purple nebula, in honor of Prince, who passed away today. https://t.co/7buFWWExMw pic.twitter.com/ONQDwSQwVa

A number of landmarks across the U.S. also donned purple in tribute, including Harlem’s Apollo Theater, Cleveland’s Rock and Roll Hall of Fame and Las Vegas’ High Roller…

The Apollo Theater, The High Roller in Vegas and Rock & Roll Hall of Fame + Museum in Cleveland honor Prince. pic.twitter.com/JkJHgmrmOL

And the Target Centre in Minneapolis, home of Major League Baseball’s Minnesota Twins.

The @Twins honored Prince the best way they could – by turning Target Field purple: https://t.co/13x5vF4afT pic.twitter.com/FYoyfLvHX1

The tributes, meanwhile, will continue as Prince fans mourn and remember him. One of the most poignant upcoming honours is the cover of New Yorker magazine, which will go on sale next week.

In honor of Prince, an early look at next week’s cover, “Purple Rain”: https://t.co/lF0Nwyd7q8 pic.twitter.com/myN15OxsCO