The Edge Performs Leonard Cohen Song at The Sistine Chapel 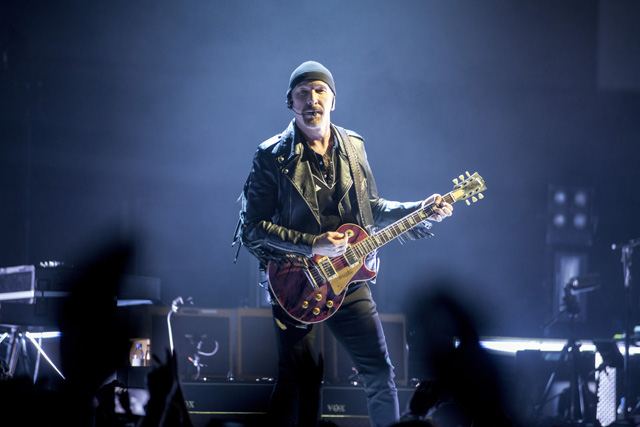 While hymnal echoes certainly wouldn’t sound out of place in the Sistine Chapel, we aren’t sure how many heavenly choirs know all the words to U2 songs. Luckily, the band’s lead guitarist, The Edge, was on hand at the iconic Vatican City locale on Friday to help out. The U2 star, real name David Evans, 54, became the first performer ever to stage a contemporary concert of sorts beneath the Sistine Chapel’s frescoed ceiling when he performed in conjunction with a conference called Cellular Horizons, during which a gathering of scientists and medical professionals discussed cancer-fighting regenerative medicines.

The Edge, with the backing of an Irish choir, played four songs, including Leonard Cohen’s “If It Be Your Will” and three U2 tunes: “Ordinary Love,” “Walk On,” “Yahweh.”

“When they asked me if I wanted to become the first contemporary artist to play in the Sistine Chapel, I didn’t know what to say,” he quipped, “because usually there’s this other guy [U2’s Bono] who sings.”

The cause, meanwhile, is one close to The Edge’s heart, as his daughter battled leukemia and his father passed away from cancer. Pope Francis, whom The Edge called “the people’s pope,” was unable to attend, though the guitarist exclaimed, “He’s doing an amazing job and long may he continue” and dedicated the song “Walk On” to him.

See The Edge perform Leonard Cohen’s “If It Be Your Will” at The Sistine Chapel below.