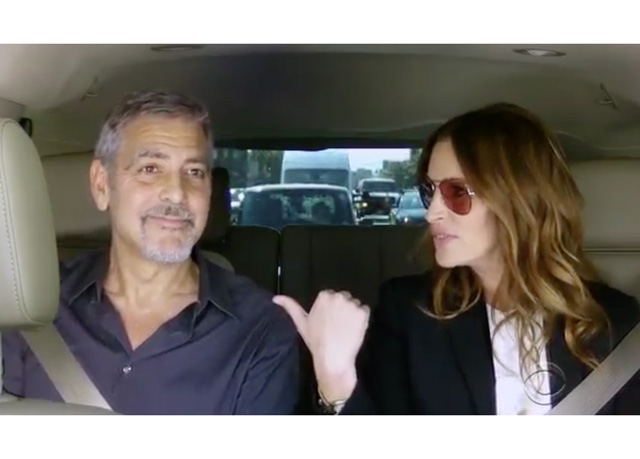 What do you get for the movie star who has everything? If you’re shopping for George Clooney’s 55th birthday – which is today, so you’re cutting it kind of close, don’t you think? – we suggest Gwen Stefani’s greatest hits, perhaps coupled with The Very Best of Queen. If you think he’d prefer a film, though, skip the Notting Hill Blu-Ray. Apparently it’s not George’s thing.

Of course these assumptions are all based on Clooney’s recent appearance on “Carpool Karaoke,” a regular musical sketch on The Late Late Show where host James Corden and a famous singer belt out the latter’s tunes while driving around Los Angeles (see the video below). In this instance the singer was former No Doubt front woman-turned solo star Gwen Stefani. Cordon, however, needed two more passengers to drive in the HOV lane, so he put in a call to Clooney, who in turn corralled Julia Roberts (who jokingly only agreed when she heard Gwen Stefani was there).

Together the foursome rode around singing Stefani’s hit “Hollaback Girl” and Queen’s “We Are the Champions,” which Clooney knew the words to but struggled with Freddie Mercury’s high notes. Clooney then impressed Stefani with his interpretation of what a “Hollaback Girl” actually is and noted that one of his favourite lines to deliver in a film is “I’m a Dapper Dan man!” from the 2000 film O Brother, Where Art Thou?. He wasn’t impressed, however, when Corden broke out the Julia Roberts line, “I’m also just a girl, standing in front of a boy, asking him to love her,” from the 1999 movie Notting Hill.

So while you could gift Clooney some Gwen Stefani or Queen tunes to listen to during breaks on the movie set, or when he’s travelling on behalf of the U.N., the gift he’d really like is if you bought a ticket to see his latest film, Money Monster, which co-stars Roberts and hits theatres next week.