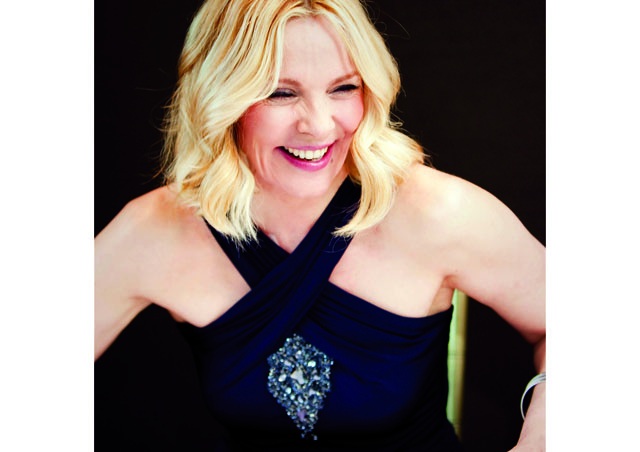 Sometimes, if middle age sets in like dust upon a marriage, life-altering decisions like a move to a downtown city condo can result in a husband and wife enjoying more excitement, adventure and sex – sometimes even with each other!

Enter 50-somethings Davina and Al Jackson, spouses who uproot their lives and move to a condo in downtown Toronto in an attempt to reignite their marriage and their lives. The fallout — hint, things didn’t exactly go to plan — is what made the first season of Sensitive Skin, the HBO Canada comedy starring Canucks Kim Cattrall, 59, and Don McKellar, 52, as the Jacksons, so popular among fans.

“People my age are free. Their kids are gone, or they’re divorced, and they don’t want the lawn and the two-car garage anymore,” Cattrall told Zoomer in an interview prior to the launch of the series in 2014. “They want to be around young people so they can feel young.”

Based on the British comedy series that starred Joanne Lumley, Cattrall worked to bring Sensitive Skin across the pond for nearly a decade to help fill the void of “stories of women going through a mid-life crisis, using comedy and drama and pathos and irony … as they did in Sex and the City.”

The series is written by long time McKellar collaborator Bob Martin and co-stars Canadians Colm Feore and Mary Walsh, as well as American Elliott Gould of MASH fame. Cattrall, meanwhile, says Davina’s story speaks to her even though she and her character share little in common. “Yes, I’m looking at issues of mortality, but I didn’t take the conventional road.” And McKellar’s tendency to shirk stability for “opportunities to throw myself off balance from outside sources” sounds very un-Al. Still, he notes, “Every choice and reaction has bigger consequences” in mid-life. And that makes for compelling TV.

With the second season of Sensitive Skin kicking off this Sunday on HBO Canada, we reach back into our archives to our discussions with Cattrall and McKellar prior to the series’ debut, where we talk everything from aging stereotypes to the wrinkles, both real and metaphorical, that mid-life brings.

Why stories about aging and the boomer demographic matter:

KIM CATTRALL: I feel that the stories to tell at this age are fresh, they’re new, and you have an audience. Where are our stories of women going through a midlife crisis, using comedy and drama and pathos and irony in very smart, intelligent ways that grab you as an audience member and say, ‘Hey, that’s what I’m going through,’ as they did in Sex and the City? And what do women want? That continues to be asked – what do women want? – but it becomes more of a question in your 50s, especially your middle to late 50s and 60s.

DON MCKELLAR: I think the struggles at this age are bigger and more conscious struggles than you have in your life. Every choice you do, and reaction, has bigger consequences now … As you know the demographic bulge is bigger and it seems to be a fairly unexamined period of life. So it’s just more original and fresh so I just think it’s more interesting. We’ve seen a lot of coming of age stories and I think it’s time to drop the “coming” part.

KC: The scenes that we shot where I’m looking in the mirror were really tough because there’s a whole crew watching me do a scene where my fingers are tracing my crow’s feet, and the lines on my face and my neck. To really have those very private moments in a very public way – it’s frightening and makes you feel very vulnerable. But, it’s truth … I want to get as close to that as possible, as painful as it can sometimes be, and also make light of it too. Bring the humanity to whatever the fear is and in my experience, whether its been a play, or a film, or a TV show, whenever I have been fortunate enough to have material that allows you to go there, the impact is – that’s what makes it art.

DM: When we were casting our son I said, “Well this is impossible!” Both Kim and I had this conversation. ‘We can’t have this grown up as our son!” [Laughs] “It’s absurd!” But, in fact, it’s all very possible. [Laughs] I had a number of those moments with this thing … I’ve always felt that my work wasn’t done until I’d exposed myself in there somehow. It didn’t mean it had to be autobiographical, but there had to be something honest about my life that I was speaking about or showing. If anything I feel that more now. I just feel the desire to do that more.

Next: Avoiding stereotypes about aging

Avoiding stereotypes about aging in the show:

KC: The cliché I think is that [middle-aged people] don’t have a say – that you have no validity anymore because you don’t know who the latest guest star was on The Bachelorette or whatever. This is ludicrous but I think part of it is because people who are middle-aged and over don’t buy as much. They don’t need as much. So society – commercialism – they say they’re not going to go see a movie three times. We’re going to make movies for young kids … but the place that I think a lot of middle-age people get relegated to is the beauty – stay young, this kind of magic wand cream, Botox, face lifts, whatever. It’s suffocating. For me I feel like I’m just getting started. And part of that is finding projects like Sensitive Skin to continue having a voice and having validity simply because I can still get product made. And it’s of a very high level, I believe. And it’s good storytelling, I believe, about a woman who lives in Toronto at this date and time and has these challenges ahead of her. And it doesn’t make her a bad person, it doesn’t make her a sad person. I think it gives her humanity and strength because she’s facing it.

Using Toronto as a backdrop for the series:

DM: We always thought Toronto is a perfect location for this. For one thing it’s about a couple who move downtown and immediately I thought of all these new condos here and the way the city’s so rapidly gentrifying. It’s perfect because it’s also about a midlife crisis in a city, not just in the characters. And Toronto seemed perfect for that … I didn’t want to do it in New York, I guess, [because] that’s so strongly associated with Sex and the City for Kim. It just seemed, without much question, we thought [Toronto’s] perfect.

KC: First of all, [the city] has never looked like Toronto to me. It’s always looked like a city with no name. We went into Etobicoke, we went into Queen West, we went into all these neighbourhoods … that I didn’t even know of. So I really appreciated that as well because as truthful and authentic as the script was, and the actors who were drawn to it, the visuals of the city, and the streetcars, and the rhythm of the city, and the glut of condos that are going on, and the use of signs that were in the street that we didn’t have art directed. They were just there, but nobody has ever seen those things, you know? That was the exciting thing about it, sort of unveiling another part of Toronto which, in itself, is in crisis.

And don’t forget the fashions!

KC: We used a lot of Canadian designers. We went from Joe Fresh to Jeremy Laing to Lida Baday – we just really wanted to use as much of Canada now as possible. It’s about making the story Canadian and using as many Canadian artists as possible … Almost every outfit, whether it was shoes, or a bag, or a belt, I’m wearing a Canadian designer.

Working with this cast and crew:

DM: We were all working together and had no choice but to track each others emotional ups and downs. And [Kim’s] extremely committed and involved with the project – more than probably anyone or any actor I’ve worked with. I mean, it was her baby from the beginning so she sort of had an unceasing commitment. She was really passionate about every aspect.

People always say that about casts but for sure it keeps you going knowing, “Oh, I’m working with Elliot Gould tomorrow. Yeah!” [Laughs] But all along the line I couldn’t be happier. Nicolas Wright, who plays our son – he’s so great and funny. You know casting is really hard and it’s hard to find the right people and there are some parts that we struggled and looked really hard for, but I’m so glad we made the effort.

On shows like this changing the perception of aging and of those who are older:

KC: This show is about being real. It’s about coming to terms with a part of your life instead of pretending it’s not going to happen. My character was a model and wanted to be an actress and she felt that she had talent but she had other choices and then life got in the way. Do I think this show will change people’s idea of what aging is? I don’t know, but it’s a step in a direction … Wool is not cashmere. It’s wool. So you’ve just got to say, “Well, I like cashmere, I hope I can maintain this as long as possible, but there is beauty outside of top skin. There is beauty in aging.” So this show is trying to show that, and embrace it, celebrate it in a way, in the sense of you lose one thing but what you gain is so much richer. And that is knowledge of who you are, not just what you look like, or how sexy you are, or how desirable you are. I don’t know of a show on television that is talking about that. And I think that that’s where the strength of this show is. It’s posing questions.