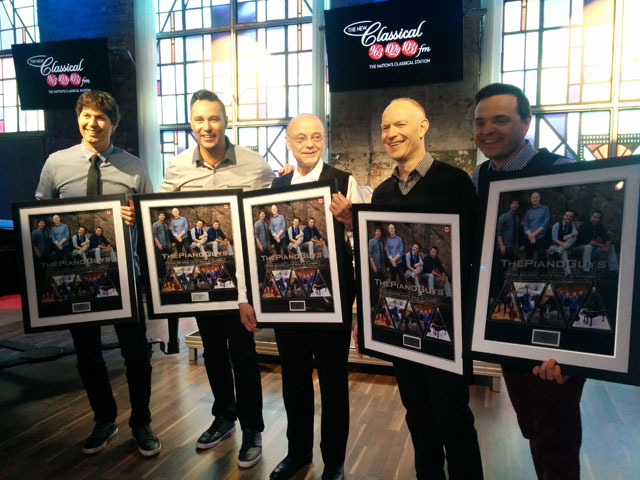 Flanked by the floor-to-ceiling multicolour windows at the Zoomerplex in downtown Toronto earlier this morning, classical/pop crossover group The Piano Guys thanked ZoomerMedia founder Moses Znaimer for contributing to their Canadian success via Classical FM radio (a ZoomerMedia property).

“We couldn’t be who we are without radio stations like yours,” Steven Sharp Nelson, the group’s cellist, said to Moses, following statements of gratitude from Sony Music for his support. To date the band has sold more than 80,000 albums in Canada and two million worldwide, while their videos on Youtube draw millions of fans.

During their time at the Zoomerplex, The Piano Guys – pianist Jon Schmidt, cellist Nelson, videographer and producer Paul Anderson and music producer and songwriter Al Van Der Beek – were honoured by Sony Music for their Canadian sales and also sat down for an interview with Classical 96.3 FM.

“We’re uncovering a great well of support,” Moses told the band after being presented with a framed picture of The Piano Guys and images from their five albums. “It’s important that people know (classical music) is alive and that it’s still a trade that can keep a lot of really smart, talented people going. So good on you.”

See below for the latest video from The Piano Guys, “The Jungle Book / Sarabande (Mayan Style)”: