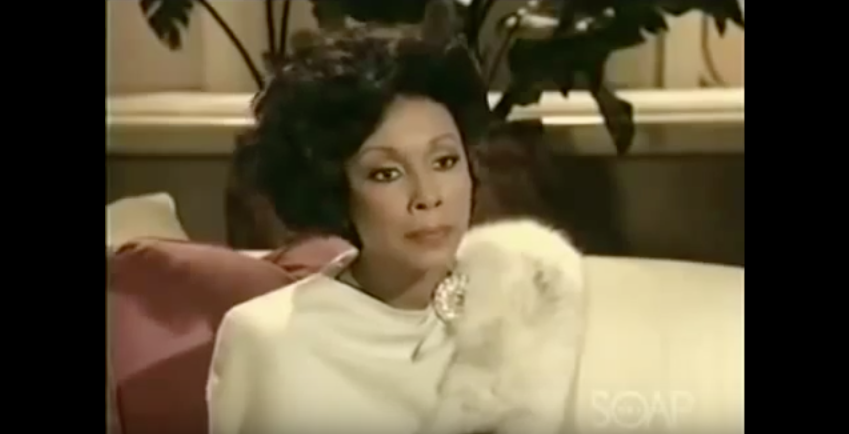 “I wanted to be the first black bitch on television,” said Diahann Carroll.

The regal beauty and legendary actress told a television interviewer that, after coming off a particularly gruelling schedule on Broadway, she was recuperating at home when she discovered the hot night-time soaps of the time: Dallas, Dynasty and Falcon Crest.

Captivated by the high drama, the swanky sets, the glamorous costumes and the delicious shenanigans of the rich and scheming characters depicted on these television shows, she decided she wanted to be part of the action.

She approached Aaron Spelling, the creator of Dynasty, telling him that the hit show had explored every plot point except integration. Her pitch was the show needed a black character and one that could go head to head with the leads, mainly, John Forsythe, Joan Collins and Linda Evans.

The idea of a wealthy, beautiful, glamorous but scheming character on network television who also happened to be black and female was practically unheard of at the time.

“Very often minorities – it’s almost required – to be nice people, and I didn’t want to play a nice person,” she said.

The veteran actress had already broken barriers in the 1960s television sitcom Julia, which was the first series to feature a black actress as the lead and for which she won a Golden Globe. She was also the first black woman to win a Tony award for best actress and was also nominated for an Oscar.

Such accolades coupled with talent and beauty was not lost on the Dynasty producers and they created the role of Dominique Deveraux, the long-lost half-sister of the patriarch of the show, Blake Carrington.

Diahann Carroll made her Dynasty debut in 1984, the fourth season of the show, which was riding high in the ratings and was a perfect foil for the show’s resident villainess, Alexis Colby, played by Joan Collins.

Viewers couldn’t wait to see a showdown between these two characters.

Their first meeting took place in Alexis’s penthouse, a swanky suite, all creams and gold. Their costumes for the scene by the show’s resident designer, glamour god Nolan Miller, was all big ruffled shoulders, gold Lurex top and mannish black trousers for Alexis and a luxurious all-cream ensemble including a fox-trimmed cape for Dominique.

And the scene was a master class in throwing shade, subtle insults and rapid-fire volley of come-backs and one-up-manship of each other.

Of course, looking back at it now years later – remember this was the 1980s – it plays as hilarious high camp.

Which is not such a far stretch from today’s reality shows. Except, on these shows featuring Kardashians or real housewives, attempts at bitchery comes across as crass, inane, idiotic and pathetic.

Take a lesson from two veteran actresses who had the art of playing rich bitches down to an art.

This video of that epic scene shows you how it’s done, kids.