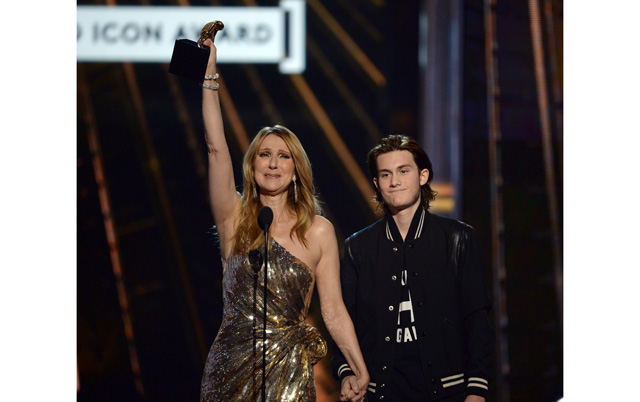 Canada’s leading chanteuse and the Queen of Pop’s tribute to Prince highlighted the 2016 Billboard Music Awards.

The award show, live from Las Vegas, featured many of music’s biggest acts, but it was Celine Dion and Madonna who provided two of the most memorable moments of the evening.

Dion, 48, performing for the first time on television since the passing of both her husband, René Angélil, and her brother, Daniel, just days apart back in January, made her triumphant return in a way that only she could – defiantly belting out Queen’s classic “The Show Must Go On” in a shimmering gown and backed by a full band and violinist Lindsey Stirling. The recipient of the Billboard Icon Award, who performer Seal called, “A singer whose career sets a standard of excellence that we all aspire to,” Dion was surprised with an award presentation from her eldest son, Rene Charles.

“I want to be so strong for my family and my kids,” Dion said through tears as she accepted the Icon Award.

“I don’t want to cry in front of you. You make me so happy.” She thanked her fans and family and capped her speech with a message for her “beloved husband, who I know will continue to watch over me from up above … Rene, this one’s for you. The show must go on.”

Meanwhile Madonna, 57, ended the night with her highly anticipated tribute to fellow pop pioneer Prince, who passed away last month at his home also at age 57. The Material Girl, who collaborated with the late performer on the tune “Love Song” from her 1989 disc Like A Prayer, donned a lavender suit and began with “Let’s Go Crazy” before delivering a rendition of Prince’s hit “Nothing Compares 2 U.”

With images of Prince on the big screen in the background, Stevie Wonder joined Madonna on stage to duet on “Purple Rain,” which brought everyone in the audience to their feet in a touching conclusion. It was a tribute that seemed to divide Prince fans online, with some cheering the performance while others felt it lacked emotion and spectacle befitting the star.

Earlier in the evening, groundbreaking all-female rock band The Go-Go’s prefaced their upcoming summer farewell tour with a performance of their classic “We Got the Beat.”