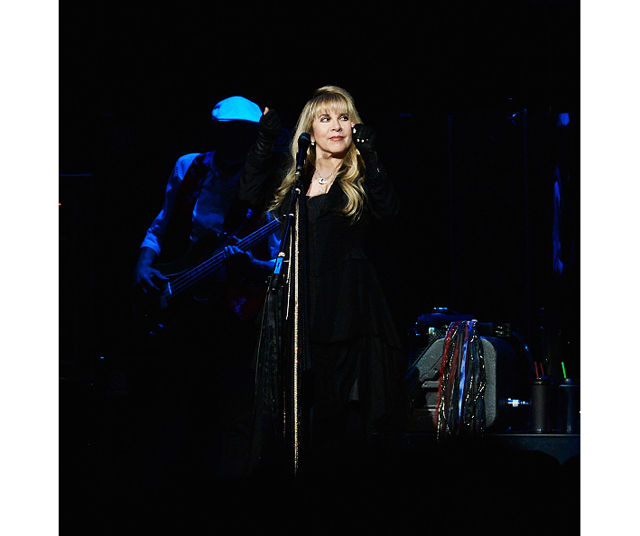 We celebrate Stevie Nicks’ 68th birthday with a look back at our 2014 interview with the queen of rock.

Stevie Nicks—singer, songwriter, Rock and Roll Hall of Famer, member of Fleetwood Mac and, to some, the Queen of Rock ‘n’ Roll. There is, however, one person who doesn’t agree with the royal title: Stevie Nicks.

“This is not the queen,” Nicks laughs, when introduced to me as such, before our recent interview.

“This is just a lucky girl who wandered down the street one day and ran into Lindsey Buckingham and decided to be in his band. And everything from there just happened.”

We share a few laughs before I mention that I’ve listened to her recent album, 24 Karat Gold: Songs from the Vault (2014).

“Have you listened to it on headphones yet?” she asks.

“You know, for me, my hearing—I’ve lost a lot of my highs,” she tells me, noting her hearing loss dates back nearly a decade. “So I personally am much better off listening on a pair of really good studio headphones…I just listen to [music] super loud and I just love listening to it on headphones because I can hear all those amazing guitar parts and keyboard parts and all of those just amazing instrumental parts that kind of go by me when I’m just listening to it on kick-ass big speakers.”

We discuss sound quality on different musical mediums when I note she must enjoy listening to music—even new releases—on vinyl.

“I do. You forget how great a sound is until you actually listen to a vinyl record. You forget why we loved vinyl so much. And then, you know, we also love cassettes.”

At this point, the Rock and Roll Hall of Famer gave me a lesson on how to get the most out of my listening experience.

“I have a [two-in-one] cassette and CD player. I’ll have my assistant make me a CD of [a digital album] and I’ll put it into my CD/cassette [player] and then I’ll [transfer] it from CD to cassette. And then I’ll listen to it back on a cassette. And the difference – the way it sounds, that way, from CD to cassette [to] the way it sounds digital – there’s no comparison. There’s something that’s just kind of warm and friendlier and bigger in a way. Not necessarily louder but … greater. I can’t even explain it. It’s just I think that whole analog thing comes through as soon as you put it back to tape. Try it.”

Eventually the conversation turned to the fact that, at age 68, Nicks is not only releasing albums but also touring with Fleetwood Mac.

“Did you ever think you’d still be doing this in your 60s?”

“No. I didn’t,” Nicks admits. “I thought I’d still be singing. I never thought I would settle down and do a residency in Las Vegas because I thought that would be kind of boring for me and because I like going to the new cities. I like the travel…So I don’t know exactly what I thought…I certainly didn’t think I’d be starting on a Fleetwood Mac tour at 66 years of age that could possibly go on for a year and a half. But I never thought that I would ever stop.”

Before going our separate ways, I ask Nicks about a quote of hers that I had read, where she discusses remaining youthful into your 60s through means other than plastic surgery.

“I think when you do what I do, you have to kind of stay young. I mean, you can’t hobble out there with a walker, even if it does have sparkles and feathers on it,” Nicks quips. “So what you do is you remain true to being age-appropriate. You know, don’t wear cut off jeans even if you have fantastic legs, which some people do. So what you do is you continue to evaluate your look and wear what really suits you and where you [used to] weigh 115 pounds and now you weigh 140 pounds you evaluate that every year. And you make sure that what you wear is still beautiful and classy and sexy, but not too sexy for being a person that’s old, more or less. [Laughs]

“And I take such good care of my skin. I refuse to let elasticity go out of my skin because I am constantly working it. I take such good care. I don’t want to ever go in and have a full-on facelift that makes me look like some beautiful stranger that’s 15 years younger that nobody recognizes…so I just do everything I can do to put anything like that off for as long as possible and maybe forever. And exercise…And I have a good state of mind—just keep moving, keep working, keep singing, keep creating, keep hanging out with great people.”

This article was originally published in October 2014.