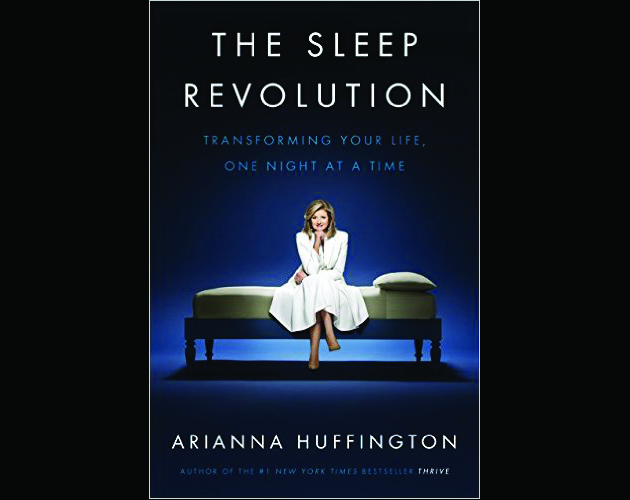 About five years ago, she took me on a tour of her Manhattan offices in the AOL building, getting most passionate about the NapQuest Room (a takeoff on MapQuest)—a lightless cocoon filled with reclining chairs (or was it beds? it was dark) for staff to use.

So I’m not surprised that the latest tome from prolific cultural disrupter (see Huffington Post, founder) Arianna Huffington is The Sleep Revolution: Transforming Your Life One Night a Time.

The book is about modern society’s chronic sleep deprivation “epidemic” and its dangerous repercussions. “Death from overwork has its own word in Japanese (karo-shi), in Chinese (guolaosi) and in Korean (gwarosa).

No such word exists in English, but the casualties are all around us,” she writes.

Huffington, 65, who gets eight hours sleep 95 per cent of the time, became a convert almost a decade ago when she was diagnosed with sleep deprivation and burnout after collapsing at her desk.

“I was trying to be the perfect mummy and taking my daughter to see colleges, then working late into the night on the site,” she told talk show host Bill Maher.

This book continues a journey she started with her previous one Thrive, in which she redefined success as wellness and balance. And in it, along with the facts, the stats and the history of sleep and how to improve yours, she points out that ironically, the glorification of gutting it out on little or no sleep in fact leads to lower productivity and failure to achieve goals.

Or as another digital diva, Facebook’s Sheryl Sandberg says in an endorsement, “Sometimes we need to sleep in to lean in.”

A version of this article appeared in the June 2016 issue with the headline, “The Drifters,” p. 16.