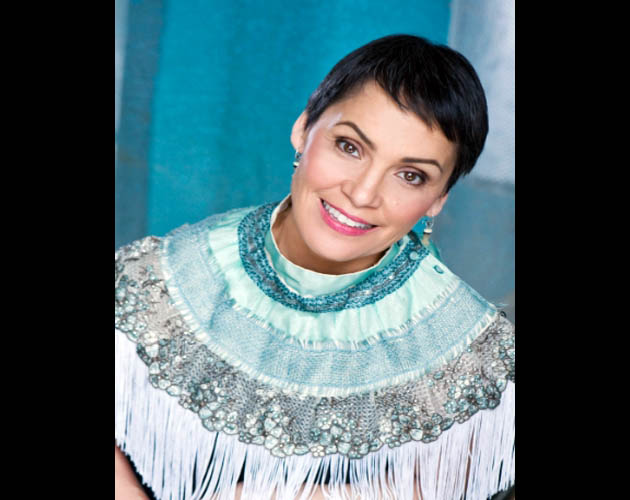 The three-day celebration this weekend in Ottawa will conclude with the star-studded Governor General’s Performing Arts Awards Gala at the National Arts Centre, with performances by singers Chantal Kreviazuk and Tom Jackson, actors Cynthia Dale and Paul Gross, and other surprise guests.

Along with Aglukark, recipients of the 2016 Governor General’s Performing Arts Awards are:

Zoomer chatted with Susan Aglukark on her way to Ottawa this week.

1. On receiving this the Governor-General’s Award, although she’s received many other awards and recognition:
“It’s special mostly because it’s a recognition of peers. Also, I feel like it’s not just for the music. It’s also for so much other work that’s gone into songwriting and social and political issues. It’s very special to have that recognized.”

2. On turning 50 in October:
“What getting older has affected more than anything is that I’ve become so much less careful about what I say. It’s not that I care any less about what anybody thinks. It’s more about how, at this point, it’s important to just do it, to not waste any time being careful. And that goes for the art and indigenous communities as well.

3. On music as a bridge between cultures:
“Music is the most effective and powerful way of getting a message out, whether amongst indigenous people or between cultures. Music has a way of transferring emotions, feelings, messages that otherwise the human spirit might not catch on to.”

4. On her work in the indigenous community:
“I just recently launched an arts journalling program for high-risk indigenous youth. It seems to be taking root. The work there is not just creating art but creating dialogue and using writing—journalling and songwriting—as a healing tool.”

5. On her own healing journey:
“In 1998, the choice for me was whether to be a celebrity or an artist. It all came to a head with postpartum depression. I had to choose whether to continue the pursuit of celebrity or the art that could heal me. That’s when I began writing songs. It’s only in the last few years that I’ve become comfortable with songwriting.”

6. On her new album in progress:
“I’m writing a song right now called ‘Winter’s Dream’, which sounds cliched but it’s about the Inuit. The more I learn about Inuit culture and history, I try to be in their shoes—coming across the land bridge from Siberia, fighting for life in Canada’s harshest climate, their love of the North and making it theirs. The song is about how, if winter had a dream, the Inuit would it.”

7. On the Truth and Reconciliation Commission:
“I think it’s the beginning of what could be an incredible healing journey for all of us and art needs to play a role in the initial phases. Music has a way of disarming an entire audience. They hear the story and the song and the music and they open up. We need that art and other forms of art as a transitional tool in the recovery phase. I’m very excited about it but there’s a lot of work to do and it’s important to have the right people at the table.”

8. On being a guest at the Governor General’s Awards:
“I’m not performing, just watching, so it’s quite possibly the easiest event I’ve ever attended. Although it might be easier if I were performing as usual. I don’t know what to expect. This time, I’m buying a gown to just sit there.”