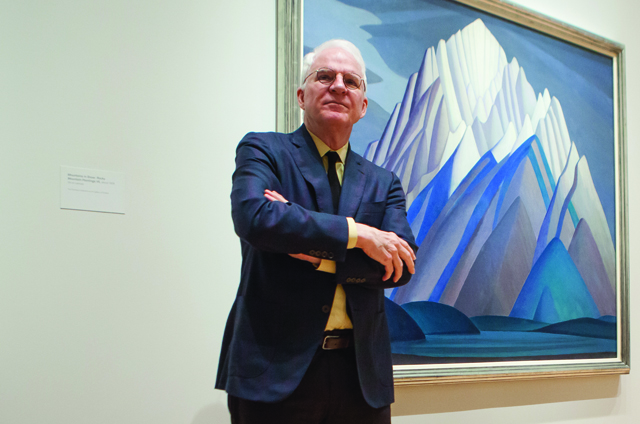 The 70-year-old comic legend and art collector speaks about curating his first major art exhibit, The Idea of North: The Paintings of Lawren Harris, this week at the Art Gallery of Ontario.

On Tuesday, for a brief moment around 12:02pm, comedian Steve Martin and I were having a discussion about the artwork of ground-breaking Group of Seven painter Lawren Harris. Well, “discussion” may be giving it too much credit. I was asking the comedian a question at the Art Gallery of Ontario, where the sprawling, distinctly Canadian exhibit he co-curated, The Idea of North: The Paintings of Lawren Harris, opens on Friday. I’d known about the opportunity to speak with Martin for weeks and, given he’s been one of my comedic heroes since I was a child, I’ve been anticipating it ever since. Among the crowd of media and art lovers who showed up to hear Martin speak with fellow Harris curator Andrew Hunter, I approached the microphone. Finally, the moment had arrived and I asked him a question I’d gone over and over in my head: “As an avid art collector and enthusiast, can you pinpoint a certain Canadian sensibility that runs through the works of Canadian artists, like Lawren Harris, that doesn’t exist in works by American or European painters?”

For a few seconds Martin’s gaze met mine as he considered my question. And then, in a moment seemingly straight out of the legendary comic’s absurd oeuvre, he turned to Hunter and asked, “Sorry, what was the question?” Whatever it was – the microphone, the tone of my voice, the universe’s penchant for irony – he didn’t hear me. Instead Hunter paraphrased the question and Martin answered that, which you can see in the video below (the first of multiple Martin videos from that day). As a fan and writer of comedy, I had to laugh.

Martin, of course, holds a great admiration for Harris, whose work he owns in his private collection. He began the morning by discussing why he chose to help curate The Idea of North, which travelled from Los Angeles to Boston – Harris’ first major U.S. exhibits – before landing in Toronto.

“I loved his work and I felt like I was the only person who knew about it. And I really was excited about bringing this body of work to America,” the 70-year-old said. “It was very successful. In Boston, people came in throngs to see the show.”

“Not in thongs?” Hunter interjected.

“I was just going to say that! You took my joke!” Martin declared as the audience howled. “In L.A. they came in thongs.”

Martin noted that his first encounter with Lawren Harris came years ago while perusing a book of art. He thought he’d stumbled upon a painting by Rockwell Kent but, when he learned of Harris, “I thought, ‘You know what? I’ve discovered this guy.’ I was disappointed to learn that he was already completely famous.”

A visit to the private collection Canadian media magnate and art collector Ken Thomson allowed him to see Harris’ work in person and, after introducing Ann Philbin, director of L.A.’s Hammer Museum, to the works of the painter, she commissioned him to curate the Harris exhibit.

Martin noted his excitement about the fact that so many of Harris’ works – more than 30 from throughout his career – would be displayed together in one space, allowing visitors to get a real sense of both the painter’s growth as an artist and also see the differences between his many isolated, snowy images.

And that’s exactly what The Idea of North offers. Interspersed with works from fellow Group of Seven members and contemporary artists, the exhibit is a multi-layered journey through Harris’ artistic, spiritual and philosophical evolution – including the evolution of his technique for painting snow – from his early work chronicling St. John’s Ward in downtown Toronto, highlighting the industrial takeover and its effects on the low income, often immigrant citizens of the neighbourhood, to the white peaks and northern landscapes that came to define his lasting legacy.

Next: Steve Martin on Canadian art

The exhibit itself encompasses multiple rooms and is wide open and uncluttered, much like the artist’s work. The early portraits of working class Toronto, which move into pictures of homes and buildings in other Canadian locales, offer a stark contrast to the snowy mountains and arctic terrain that will appear so familiar to visitors. They also offer an intriguing narrative about both the artist and his priorities and worldviews, as well as of the subjects themselves.

The exhibit, in part, is anchored in Toronto’s history and specifically that of the struggles of the residents of St. John’s Ward. There are Harris’ portraits of homes and neighbourhoods and even pivotal figures in the community contrasted with archival photos and maps of the same neighbourhoods, as well as contemporary art and photography examining if, and how, anything has changed since Harris’ time. When it comes to the more famous winter landscapes, photos of Inuit families in locales that inspired Harris’ barren paintings of the same areas accompany the works, as does the explanation as to how the artist, while at once bringing the Great White North to prominence, also inadvertently contributed to the notion that it’s a cold, lifeless and uninhabited land. And yet, it’s those same wonderful paintings that have propelled Harris’ popularity within and, now, outside of Canada.

“I’d seen some Harris paintings that I thought, ‘That’s unusual, that’s strange’ and then have been touring around Canada and seen exactly the idea of what he was painting,” Martin said in response to my question about Canadian sensibilities in art.

And that’s really the best part of this exhibit. Whether it’s the Ward in Toronto, a home in the Maritimes or a mountain peak shrouded in ice and snow, there’s a grand familiarity that permeates The Idea of North. It feels like home.

Steve Martin on what he would ask Lawren Harris if he could meet him today:

The Idea of North: The Paintings of Lawren Harris runs from July 1-Sept.18 at the Art Gallery of Ontario. For more information on the exhibit and related events, visit www.ago.net.