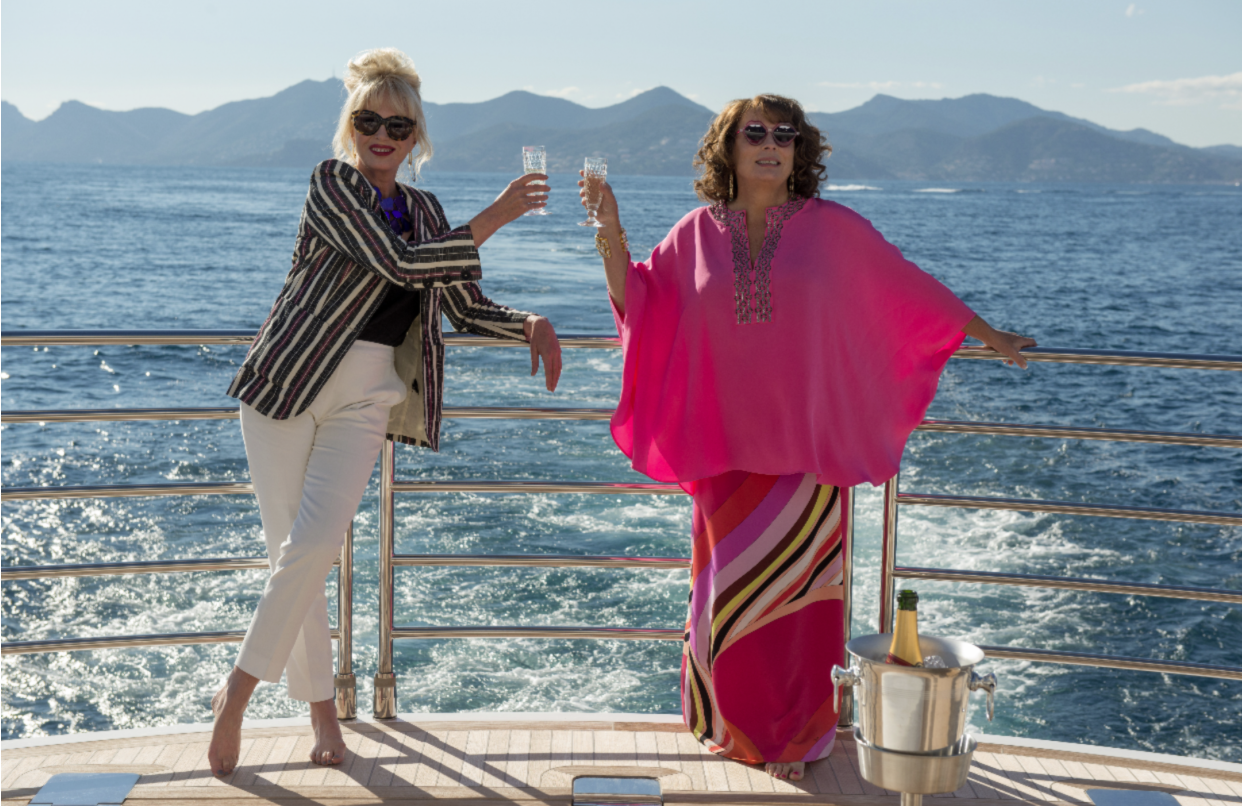 Eddy and Patsy are back! Bigger, more bombastic and finally on the big-screen—surely a medium that is large-scaled enough to showcase the epic grandeur of their over-the-top and fabulous lives. Or so you would like to imagine these two delusional, hard-drinking, all-night partying, fashion-loving, middle-aged women would like to think.

Absolutely Fabulous was a wildly popular BBC television series that ran sporadically from 1992 to 2012 that centered around the hilarious antics of Edina Monsoon, a publicist and her best friend Patsy Stone, a fashion magazine editor.

Played brilliantly by Jennifer Saunders (also a co-creator and writer of the show) and Joanna Lumley, much of the popularity of the show stemmed from the not-so-politically correct attitude of the two characters, their raucous and irresponsible behaviour, their gleeful materialism and their comic embrace of the latest lifestyle fads and fashion trends.

It was a rare depiction on television at the time—or in pop culture for that matter—of women not only behaving badly but unapologetically so. Even more surprising—these characters were not teens or young women stumbling their way into the working world—they were successful and older women.

Now along comes the big screen adaptation, Absolutely Fabulous: The Movie, which opens today and stars the same cast as the television show. Along for the ride are an army of celebrity cameos including Jerry Hall, Joan Collins, Dame Edna, John Hamm, Lulu, Stella McCartney and Kate Moss.

The movie picks up exactly how we imagine the best friends’ lives would be—still drinking, smoking, clubbing at London’s hotspots, creating havoc and continuing to make a misery of the life of Edina’s conservative daughter Saffy—now mother to a teenage girl.

But with all the partying and self-centredness, a touch of ugly reality has seeped into their lives.

Edina, nearing 60—and needing money—has decided to write her memoirs, except no one would publish it as she is now seen as washed up and irrelevant. And when you’re no longer seen as cool, the only logical thing to do is to align yourself with cool so she sets out to land the coveted contract as publicist to supermodel Kate Moss. And chaos and hilarity ensues.

While it has been almost 25 years since the television series debuted, much has changed in the world and the writers tried to update the duo—but surprisingly not that much. Patsy goes on Tinder and Edina is trending on Twitter. And the two flying on one of those infamous budget airlines in the UK makes for a funny scene.

While much of their antics still remain hilarious after all these years—and you can’t help but admire them for their flat-out embrace for living the high life at any cost—and any age—you realize that real life has trumped fiction. With the antics of the Kardashians, Kanye West and assorted reality stars—bad behaviour is just not that shocking now. And Edina and Patsy seems somewhat nostalgic already.

While the premise of the movie seems gossamer thin and flimsy, keep in mind, this is “Ab Fab” after all, where plot might be as light as champagne bubbles but none-the-less, it does leave you a bit giddy with laughter.