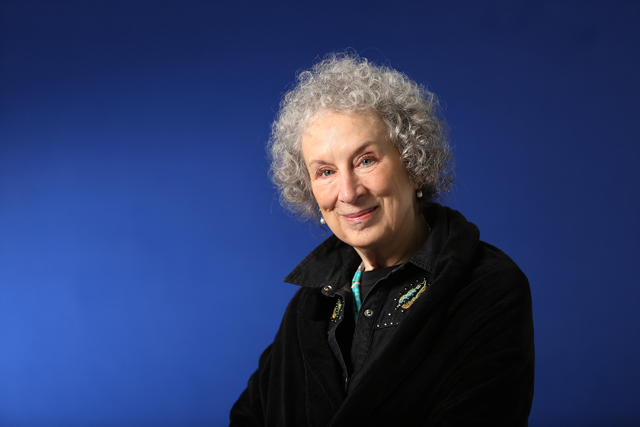 While Margaret Atwood fans cheered the news that the author’s Giller Prize-winning novel, Alias Grace, was being adapted into a miniseries directed by Sarah Polley, Canada’s First Lady of Letters revealed an even bigger surprise this morning in an interview with Zoomer—she’ll appear in the series in a cameo role.

“Guess what I’m doing this afternoon—I’m visiting the set,” Atwood, 76, says when asked about the upcoming miniseries, which will air on Netflix and CBC in 2017. “And you heard it here first—I’m getting fitted for my costume because I’m going to [have] a cameo in one of the scenes.”

Atwood says she was approached by the production about appearing in the show. “They said, ‘Would you even consider doing this?’ I said, ‘Of course.'” And as for the character she’s playing: “I’m going to be a disapproving, judgemental lady in a church,” she says, before letting out a laugh. “Typecasting.”

The role would mark the first time Atwood acted as a character on screen. She played a fictionalized version of herself in the 2013 adventure comedy, Awaiting Atwood.

Released in 1996, Alias Grace, which made the shortlist for the Booker Prize, follows an investigation into the real-life murders of two residents of Upper Canada—Thomas Kinnear and Nancy Montgomery—in 1843. The story is told, in part, from the point of view of one of the accused assailants, Grace Marks. The miniseries is adapted and written by celebrated Canadian filmmaker/actress Sarah Polley and stars another home-grown talent, actress Sarah Gadon, as Grace.

“I think that the miniseries, or the series on television, has created a whole new art form and a whole new way of doing novels which, in some ways, is more satisfying than trying to stuff it all into 90 minutes,” the two-time Zoomer cover subject said earlier today, “because you can explore at greater length, you don’t have to cut a lot of things, you can go from episode to episode, deepening the characters.”

She noted that she’s held the project for years until Polley had time to do it, saying the 37-year-old filmmaker told her she’d wanted to bring the book to the screen since she was 19.

“I read her early scripts—they were brilliant. As they developed she would ask questions, I would do my best to answer them,” Atwood says. “They’ve done a ton of research into the period. So she is such a pro and I am very excited to see what [she and her team] come up with.”