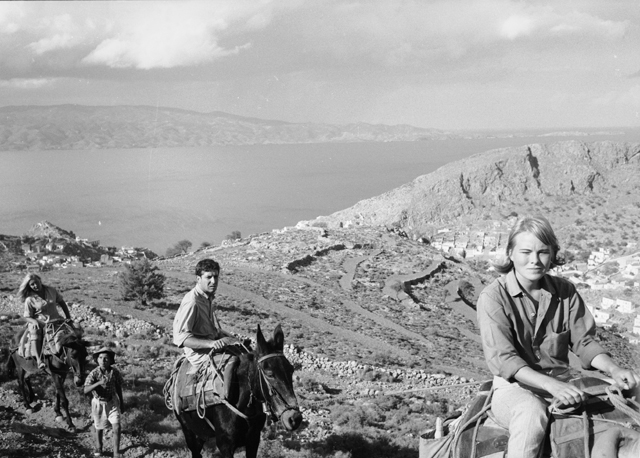 Marianne Ihlen, foreground, and Leonard Cohen, middle, ride donkeys with friends through the hills of Hydra, in Greece, in 1960. (Getty Images)

A close friend of Marianne Ihlen, the one-time romantic partner of Leonard Cohen who inspired two of the Canadian troubadour’s most enduring songs—”So Long, Marianne” and “Bird on the Wire”—revealed the contents of a letter the singer sent to his former muse upon hearing of her impending death last week.

Documentarian Jan Christian Mollestad, a longtime friend of Ihlen’s, spoke with CBC and explained how she sent him a text recently to say that she was dying of leukemia. He hurried to the 81-year-old’s bedside and sent a message to Cohen to inform him of Ihlen’s situation. Mollestad says Cohen, also 81, responded a few hours later with a beautifully crafted note, which included heartfelt sentiment as well as heartbreaking lines, such as Cohen noting that, “we are really so old and our bodies are falling apart and I think I will follow you very soon.” Mollestad recalled the contents of the letter during the CBC interview:

“It said ‘well Marianne it’s come to this time when we are really so old and our bodies are falling apart and I think I will follow you very soon. Know that I am so close behind you that if you stretch out your hand, I think you can reach mine. And you know that I’ve always loved you for your beauty and your wisdom, but I don’t need to say anything more about that because you know all about that. But now, I just want to wish you a very good journey. Goodbye old friend. Endless love, see you down the road…

When I read the lines ‘stretch out your hand,’ she stretched out her hand. Only two days later she lost consciousness and slipped into death. I wrote a letter back to Leonard saying in her final moments I hummed ‘A Bird on a Wire’ because that was the song she felt closest to. And then I kissed her on the head and left the room, and said ‘so long, Marianne.'”

Born in Norway, Ihlen spent her early life in the care of her grandmother according to an interview Ihlen did with author Kari Hesthamar. At age 22, her parents rebuked her dream of attending theatre school so she ran away to the Greek island of Hydra with her boyfriend, Norwegian author Axel Jensen.

In 1958 the couple married and, in 1960, at age 25, Ihlen gave birth to their son, affectionately called Little Axel. The relationship became frayed, however, and Jensen left Ihlen for another woman. Then one day, while shopping in Hydra, she met the relatively unknown Cohen, who called her the most beautiful woman he’d ever seen.

“So Leonard and I began to meet,” she told Hesthamar. “Early in the day we would maybe go down to the beach. Sometimes little Axel and I would accompany him up to the small house he had rented, for it wasn’t so high up. And we’d prepare lunch. And then little Axel would fall asleep, and then he’d read poems for me. So we started seeing each other during the days…He even drove me all the way home to Norway in this car that Axel had brought with him down there. I wasn’t exactly pampered in being used to meeting a man who behaved the way he did. I have to say that. He in fact reminded me very much of grandma. Her energy, her enormous presence. You could really trust in him. It was like…is it really possible to be so fond of me as he says he is?”

Ihlen said that Cohen returned to his home in Montreal, from where he sent her a telegram: “Have house, all I need is my woman and her son. Love Leonard.” Ihlen and Little Axel soon immigrated to Montreal to live with Leonard.

“Well, actually, I was terrified that Axel was going to disturb him, because he had to write,” Ihlen said. “But what happened was that Axel would be lying prone on the floor drawing. And didn’t say a word. He was a nightmare with me…And so then Leonard would elegantly open the door into his tiny atelier, and say: ‘Axel, I need your help.’ And then it would be deadly silent in there for two hours. And little Axel drew and Leonard wrote. That’s how I experienced it. And little Axel was enormously proud.

“Oh, those years were really good. Very good. We sat in the sun and we lay in the sun, we walked in the sun, we listened to music, we bathed, we played, we drank, we discussed. There was writing and lovemaking and…It was absolutely fabulous, you know, to have it like that. During five years I didn’t have shoes on my feet, you know…And I met many beautiful people. Now they are cast to the winds. Some are dead. Many are dead.”

Ihlen also says that, “So Long, Marianne” isn’t the only Cohen song she associated with herself.

“‘Bird on the Wire’…That was when electricity came to Hydra, you know, and they would land on these strange wires that suddenly cut right in front of the window. Just like notes. Magnificent. Therefore I felt that it was also my song. But of course everyone refers to ‘So long Marianne.'”

Cohen and Ihlen remained together for five years, with mother and child spending a lot of time alone in Hydra while the singer travelled to Montreal or New York. Marianne even appeared on the back cover of Songs from a Room, Cohen’s second album. Over time, however, the couple drifted apart and, eventually, broke up.

“People change and their bodies change…but there is something that doesn’t change about love,” Cohen is quoted as saying in a 1992 interview on his Facebook page. “Marianne, the woman of ‘So Long, Marianne,’ when I hear her voice on the telephone, I know something is completely intact even though our lives have separated…I feel that love never dies and that when there is an emotion strong enough to gather a song around it, that there is something about that emotion that is indestructible.”

“This relationship was a gift to me. And a gift for Leonard, I might also add, not to underestimate myself completely,” Ihlen told Hesthamar. “And that’s what it was. However, I think it has been sort of an opener for the rest of life for us both, for better or worse.”