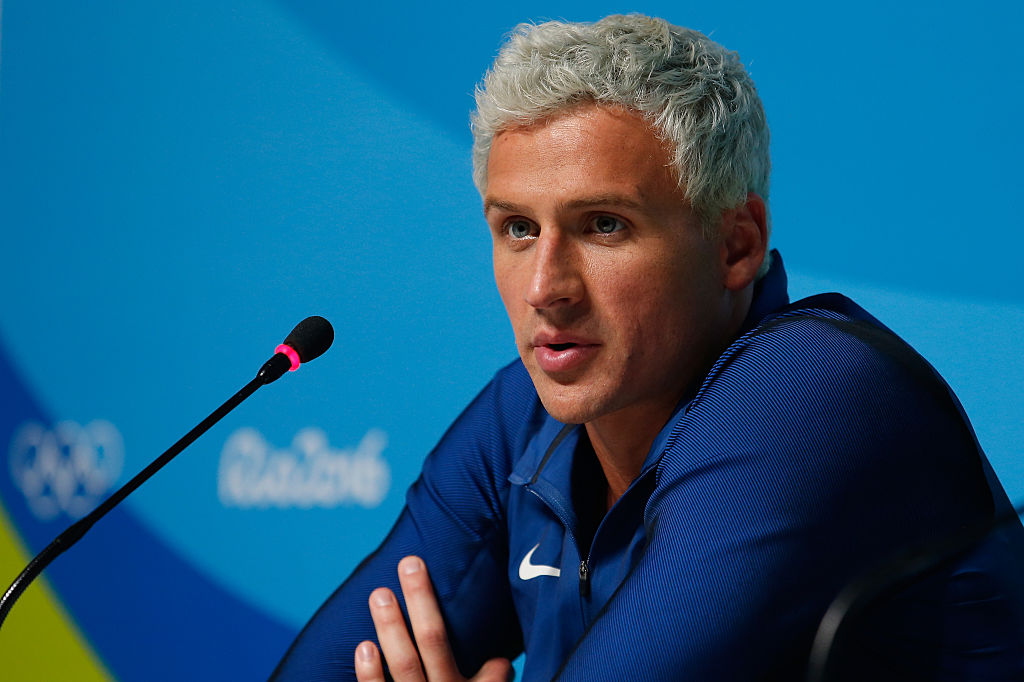 Just when you thought the Russian doping incident was going to be the biggest scandal of the Summer Games in Rio, along comes Ryan Lochte.

So, who wins gold medals for Outstanding Liar and igniting an international firestorm? That would be Ryan Lochte.

Earlier this week, the American swimmer, 32, and 12-time Olympic medal winner claimed that he and three of his teammates—Jack Conger, 21, Gunnar Bentz, 20, and James Feigen, 26—were robbed at gunpoint in the early hours of Sunday, August 14, by men posing as police officers.

Lochte said he and three of his teammates were heading from a party and back to the Olympic Village when their taxi was pulled over and they were ordered to get out of the vehicle by a man posing as a police officer and get on the ground. The swimmer claimed he initially refused the request, but when a gun was pointed at his forehead, he complied—but with the retort, “Whatever.”

Naturally, the incident sparked an international outcry—it’s not the first mugging of an Olympic athlete at these Games—and added to the overall headache of various other problems that have plagued Rio, from the Zika virus to filthy water.

However, reports later surfaced that suggest Lochte and his companions lied about the events of night. Security surveillance footage shows that they stopped at a local gas station to use the washroom, which was locked, and then proceeded to urinate on the property and trash the place like drunken frat boys. When they attempted to leave their cab, which was stopped by a security guard, who showed a badge and did point a weapon at the swimmers, they ponied up a small amount of cash to cover the damages and drove off. Red flags were raised when Brazilian police viewed video footage from the Olympic Village later showed the swimmers arriving back in high spirits—and with their phones and watches, therefore and not exactly looking like the victims of a recent hold-up at gunpoint.

The debacle all started when Lochte’s mom, Ileana, told media that her son had been robbed at gunpoint. “I think they’re all shaken up,” she told USA Today on the day of the alleged robbery. This occurred before Lochte had confirmed and embellished the incident on camera to NBC’s Billy Bush which set off a series of conflicting reports.

Is it possible that this entire lie started with the simple fact that 32-year-old Lochte didn’t want to tell his mom the truth about his behavior that night, or that this attention-loving athlete wanted more of it after being overshadowed in the pool and in the media by the historic swim victories by his teammates Michael Phelps, Katie Ledecky and Simone Manuel?

Lochte had already returned home to America by the time his tall tale was discovered. And he began to walk back his story, under pointed questioning from NBC’s Matt Lauer, admitting they had already stopped at a gas station when the incident occurred and the gun was not held to his forehead but pointed in his direction without, however, revealing how his actions instigated the events of the night. Conger and Bentz were about to board their own flights home when they were removed by Brazilian police for questioning, admitting the dramatization of events had been thought about by Lochte. Feigen who, like Lochte, had been charged by Rio law enforcement with reporting a false crime, donated $10,800 dollars to a children’s charity before being released to fly home.

The charitable reading of the situation is Lochte, possibly not quite understanding the full implications of his white lie, did not intend to perpetuate the image of the “Ugly American Abroad” and that of a privileged white tourist behaving badly in another country. However, various factions have made use of the incident to their benefit: Brazil and the Rio police force view it as the perfect opportunity to help improve their less-than-stellar image on the international stage after all the negative reports about what went wrong at the Summer Games. Meanwhile, it’s possible the Russians are quietly celebrating the fact that the spotlight has shifted away from them—for now, at least.

As for the International Olympic Committee or, more specifically, the US Olympic authorities, it remains to be seen what course of action they will take on Lochte.

Earlier today, the swimmer took to social media where he wrote a lengthy post apologizing (sort of) for the incident.