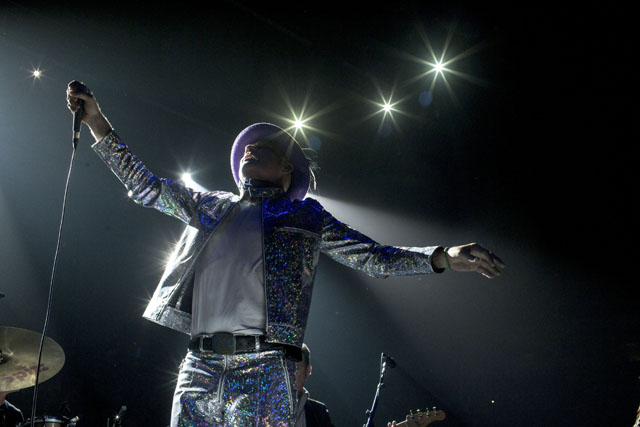 No dress rehearsal, this is our life: Gord Downie and The Tragically Hip played their final gig, in their hometown, in the arena that the band inaugurated, on the street that bears the band’s name. Tonight, the music, the ovations, the tears, the love were all touchingly real. All the band’s accolades and honours, the fact that they’ve performed everywhere from international arenas to Saturday Night Live to a command performance for Queen Elizabeth II, didn’t matter. Though they’ve been so all along, tonight, with national television, radio and web broadcasts allowing for viewing/listening parties coast to coast to coast, The Tragically Hip were undeniably Canada’s band. It was a public parting of an emotional magnitude rarely seen and it was, indeed, a gift — both to Canadians and Downie himself. From David Bowie to Prince, we’ve lost too many performers this year alone who never had the opportunity to take one final tour, play one final set, say one final goodbye in person.

Tonight’s concert carried such national importance that Prime Minister Justin Trudeau attended, a photo of him hugging Downie going viral as if Canadians everywhere saw ourselves in that momentary embrace. Like Stanley Cup heroics or a home run to win the World Series, years from now people will remember where they were when they saw the Hip play for the final time. It was a party. True, a party weighted in bittersweet poignancy, but a celebration nonetheless.

Taking the stage in Kingston, Downie, who revealed his battled with incurable brain cancer in May, embodied Man Machine Poem, the name of the band’s last album and tour. Wearing a metallic suit and performing the songs that earned him the title of Canada’s unofficial poet laureate, beneath it all Downie was very much a man, wandering the stage as he sang, speaking with the crowd and at times, releasing a tear or two.

“Thank you, and thank the people for keeping me pushing, keeping me pushing,” he offered at one point during the show, eliciting chants from the sold out crowd before transitioning into an emotional rendition of “Fiddler’s Green.” The Hip played all their hits and the crowd sang along, with Downie pausing every so often to take in the emotion of the moment. Eventually the band huddled. Each individual member embraced Downie before leaving him alone on the stage to rousing chants of “Gordie.” The singer took the mic and discussed the early years of the band, recalling the small crowds their music grew from to what they became. He thanked the fans for a great tour and the camera panned the crowd. Not a dry eye in the house.

Eventually the band returned for three encores. He thanked the fans for attending and also the Prime Minister, declaring that under Trudeau Canada is “in good hands.” He spoke words of support for aboriginal people living in Canada’s north and then simply, and sincerely, said “Have a nice life.” And then, with a mixture of cheers and tears and “Ahead By a Century,” they were done. Downie embraced his bandmates, waved to the crowd, and left the stage for good.

Gord, presumably, is preparing to enjoy his remaining time with his loved ones while Canadians everywhere brim with love for one of our greatest artists while also facing the reality of a post-Hip nation. Aside from the possible release of “lost” songs or demo recordings, there will likely be no new Tragically Hip music beyond Man Machine Poem, but their songs will still echo through sports arenas and during late night road trips. The band will continue to provide the soundtrack for that moment when night turns to morning, at the pub or at the cottage.

The Tragically Hip’s musical oeuvre occupies a huge chunk of the soundtrack of Canadiana. Whatever happens from here, Downie can rest assured that his legacy, his poetry and his band’s music will live on long after the last guitar reverberates into the Kingston sky. And that’s something for all of us to sing about.