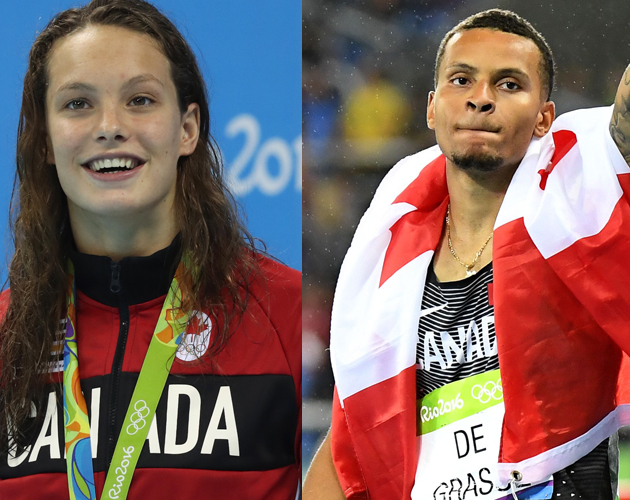 Penny Oleksiak and Andre De Grasse were the breakout Canadian athletes at the Summer Games in Rio.

Now that the Summer Olympic Games in Rio have drawn to a close—with Canada’s best summer medal haul ever!—we look back on the memorable moments, Canada’s top performers, the breakthrough of older athletes and the breakout of the ugly American.

1. New stars are born: Sprinter Andre De Grasse and swimmer Penny Oleksiak were the breakout performers for Canada in these Olympics and, barring injury, will proudly represent our nation in Olympics to come. The 21-year-old De Grasse captured silver in the 200m sprint and bronze in the 100m sprint while the engaging 16-year-old Oleksiak surprised everyone by winning four medals in the pool, including gold in the 100m freestyle. She even carried our nation’s flag during the Closing Ceremonies.

2. Older athletes shine: Unlike any other Olympics in recent memory, the Rio games will be remembered as a breakthrough for older competitors. Canada had its fair share of vets, led by equestrian team members Eric Lamaze, 48, who won bronze, and Yann Candele, 45, who competed against 61-year-old Australian Mary Hanna. In rowing, 58-year-old women’s eight coxswain Lesley Thompson-Wille competed in her eighth Olympics. Representing other countries, 43-year-old American cyclist Kristin Armstrong won her third consecutive gold medal in the women’s individual cycling event. Even gymnastics, a sport traditionally ruled by teenagers, had its share of older competitors. Uzbekistan gymnast Oksana Chusovitina competed in her seventh Olympic games at age 41. And legendary coach Martha Karolyi oversaw the U.S. gold-medal performances at the age of 73!

3. Our women steal the show: The vast majority of Canada’s medals were captured by our women athletes. Led by Oleksiak’s Canadian record-setting four medals, the women’s side gave strong performances in both individual and team events. Although the men couldn’t equal the women’s medal haul, they did manage some shining moments, led by sprinter De Grasse and gold medal high-jumper Derek Drouin.

4. Greatest Of All Time? The Rio Games could mark the final performances of two of the greatest Olympians ever: Jamaica’s Usain Bolt, who’s now won gold medals in 100m and 200m sprints in three straight Olympics and American Michael Phelps, the most decorated Olympic athlete ever, with a 28 medal haul, including 13 golds in individual events. The Olympics won’t be the same without these two larger-than-life competitors.

5. Farewell to Brazil: In the lead-up to the Olympics, the media proclaimed the Rio Games would be a disaster. And while there were more than a few hiccups—the bacteria-infested diving pool (why not green water for a change?); rumours of the Russians buying off boxing judges (the Russians cheat? Never!) and American swimmers getting robbed at gunpoint (wait, that didn’t happen?)—for the most part the host country put on a great show and Rio’s landscape provided some of the most scenic venues in Olympic history.