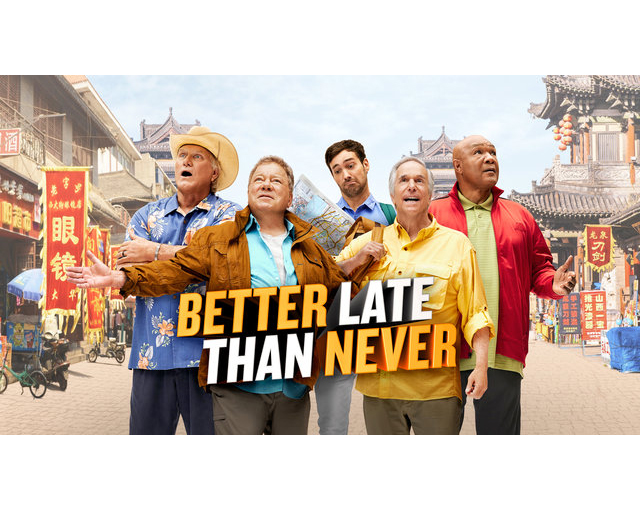 It sounds like the beginning of a joke from another era—”Captain Kirk and The Fonz walk into a sushi bar…”—except this scenario couldn’t be more real. In fact, it’s not only real, it’s in primetime.

On the surface Better Late Than Never is essentially a bucket list buddy comedy based on the hit South Korean reality series Grandpas Over Flowers, which saw four celebrity seniors travel across Europe. In some ways the American version, like any other “reality” show, is staged for full entertainment value while the personalities of the foursome play into the archetypes audiences expect—Shatner, channelling his days commanding the Starship Enterprise, declares, “There is only one way to discover a culture…to explore bravely,” while the Louisiana-born Bradshaw starves his way through Tokyo while pining for chicken fried steak. However, there are seemingly genuine moments too, like when Shatner opens up about his fear of death.

Perhaps, though, the most important detail about the series remains that, in a reality TV universe that largely thrives on celebrity, sex and scandal to pull in ratings, Better Late Than Never offers up only one of the three while simultaneously avoiding the tired “grumpy old men” stereotype. Instead we’re offered four vibrant, fun seniors who espouse a positive message about embracing life and tackling new adventures at any age. In fact, in the first episode the cast candidly discuss their apprehensions about participating in the show and how they employ fear as a motivating tool to take on new challenges.

And, as we’ve seen in recent years with the success of film franchises like The Expendables to the critically acclaimed Jane Fonda-Lily Tomlin Netflix comedy Grace & Frankie to the slate of successful films starring actresses over the age of 60 (who Vulture.com calls “the new box-office powerhouses”) there’s a significant demand for movies and TV shows starring the boomer cohort. Those productions get extra points when they tackle issues relevant to that demographic, like Better Late Than Never’s message that you’re never too old to try something new. And there’s no debating that the show resonated with audiences, as 7.4 million viewers tuned in for the debut episode last Tuesday.

We’ll have to wait for a few more weeks to see if the ratings hold up but the overall trend is clear—boomer-driven stories on the big and small screen are hot. Sure, it took awhile for Tinseltown to do away with the stereotypes of grumpy old men and grannies relegated to their rocking chairs but that development, you might say, is better late than never.

Better Late Than Never airs on Tuesdays at 10pm on NBC.