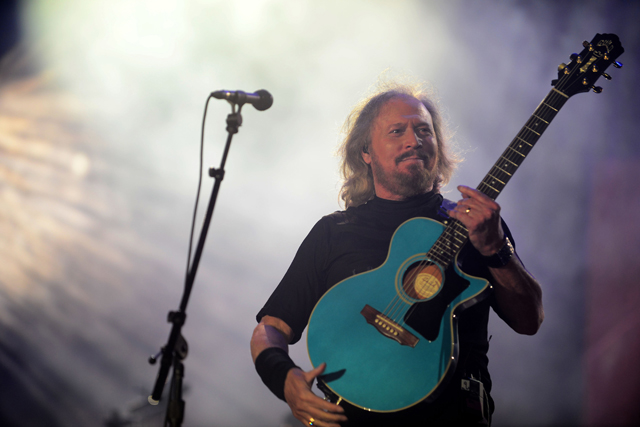 The legendary Bee Gee talks music, family and his new solo album, In The Now.

Barry Gibb, songwriting great and one third of the legendary band The Bee Gees, celebrates his 70th birthday today (September 1, 2016), but the Rock and Roll Hall of Famer is hardly dwelling on what the calendar says.

In fact, during a recent visit to his home in Miami, Gibb told Zoomer that In The Now is not only the name of his new solo album, but also his mindset as he uses music to unpack the emotions and grief that have weighed on him for years.

“It’s the abstraction. And also it’s the denial of time,” Gibb said. “I’ve come to terms with the fact that time doesn’t mean anything at all. We’re just struggling through this thing—we don’t get it, it’s a grand illusion, it’s different for everybody but nothing is tangible…I just wanted to write what I believed were great songs and to try to be timeless. To be right in this moment. Tomorrow ain’t here yet and all we have is memories. So you live on that.”

Gibb wrote all the songs on the new album with his sons Stephen and Ashley, including the track “Home Truth Song,” on which he sings, “I’m the man who’ll not fade away/Standing with my hand in the fire/Feeling forever young.”

“That’s how you have to be,” he says. “It’s not whether or not you really feel that way. This is my advice to me. And also it’s blind ambition and bluster and ‘Dammit, I’m not who you think I am.’ I’m what’s left of the Bee Gees but I’m an individual performer and, in a sense, we all were because every single brother wanted their own career. Every single brother wanted the attention…So we spent our lives in that kind of competition, too.”

Gibb, though, admits he still feels he has something to prove through his music—”That I’m still standing and I’m still making records. I love being a part of the music world.” And, despite the fact that he began writing one of the songs on the new album, “End of the Rainbow,” while his brother Robin was in a coma (he’s lost brothers Andy in 1988, Maurice in 2003 and Robin in 2012, as well as his mother just a few weeks ago), Gibb retains a largely positive outlook on life as he marks the big 7-0.

To further celebrate Gibb’s 70th birthday, we’ve dug up seven facts you might not have known about the beloved Bee Gee:

1. Gibb is second only to Paul McCartney as the most successful songwriter ever, according to The Guinness Book of World Records.

2. Gibb wrote the title track to the Grease soundtrack, performed by Frankie Valli, which hit number one on the U.S. charts.

3. Michael Jackson’s album Thriller was inspired by the Bee Gee’s Saturday Night Fever soundtrack. It also eventually knocked the SNF soundtrack out of the top spot on the list of bestselling albums ever. Jackson also served as godfather to Gibb’s son, Michael.

5. Barry’s father, Hugh, was a big band drummer during the war and his mother was a band vocalist. Gibb told Zoomer that his wife Linda’s parents once danced to Gibb’s father’s band in Scotland, long before Gibb and Linda knew each other. “So they’d already met in a different way, in a different era.”

6. Technically, Gibb isn’t the only Barry Gibb in his family. His niece’s name is Beri Gibb.

7. Gibb’s latest album, In The Now, is only the second solo album of his career. His first was 1984’s Now Voyager.

In The Now is available in stores and online October 7, 2016.