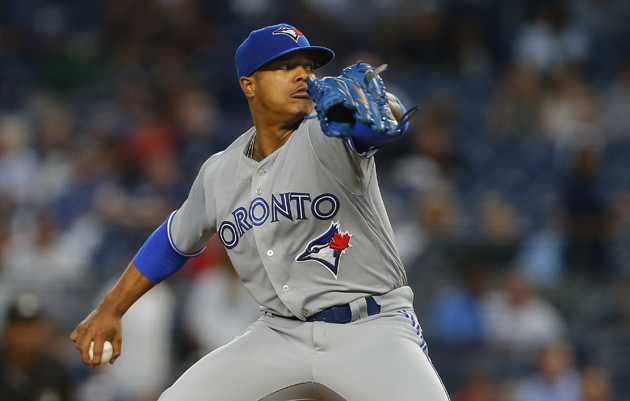 There are worrying signs as the Toronto Blue Jays head toward their stretch run.

It’s September, the stretch run in baseball, a time when every pitch, every at-bat takes on a heightened importance. It’s the month ball fans live and die for. And while the roller coaster ride can cause too many nervous moments, we wouldn’t have it any other way.

With the Blue Jays struggling lately—having just been swept by the New York Yankees—this weekend’s series at home against the Boston Red Sox looms increasingly large. Right now, the Jays’ mini-slump is no great cause for concern. It’s expected that teams go through ups and downs throughout the season.

However, there are worrying signs and a number of questions that must be answered if there’s to be any post-season action this year.

1. Can the starting pitching hold up?

Aaron Sanchez, J.A. Happ and Marco Estrada have all pitched well above expectations for most of the year while Marcus Stroman has been OK and R.A. Dickey a serviceable innings-eater. Can the top of the order continue to perform well or will they bounce back to earth, as they’ve shown signs of doing lately? If the starters begin struggling, the Jays will have to rely on their big bats to bail them out, which may not be a successful strategy because…

2. Why does the offence seem to disappear so frequently?

This team is built around power and when that dries up, as it has lately, the Jays simply don’t win. And while the team continues to score a bushel load of runs, they don’t seam as fearsome as they did last year. The bats, as always, will take care of themselves—there’s far too much talent for them to go into a prolonged slump. Perhaps moving Jose Bautista into the clean-up will get things rolling again.

3. Is the bullpen better than last year?

This is another area of concern, not with closer Roberto Osuna but with middle relief, especially the older arms: Jason Grilli and Joaquin Benoit. The main worry is the lack of a situational lefty, who can come in and get left-handed hitters out at key moments during a tight game.

4. Is John Gibbons a capable manager?

Not according to an espn.com poll, which ranked him the worst manager in baseball. Besides an annoying tendency to pull starting pitchers early and challenge every close call, he’s probably no worse than average. And even if Gibby is a terrible in-game decision-maker, I’d keep him around if only for his hilariously honest post-game media conferences.

5. Why do the Jays lose so many one-run games?

Good question. I think we can put it down to bad luck rather than blaming these losses on players who can’t hit in the clutch or on poor managing decisions. However, if that number doesn’t swing in the Jays’ favour soon, it could spell disaster down the stretch.