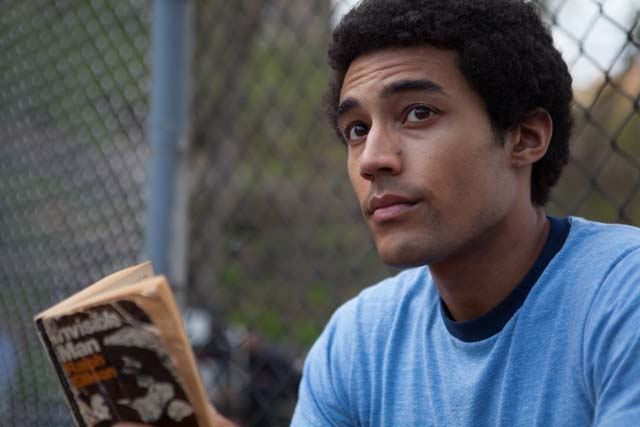 Image from the film Barry courtesy of TIFF

Saturday at TIFF brings biopics galore, from a beat up boxer to a young chess champ to U.S. President Barack Obama’s early years in New York City. No word if the Obama flick features a cameo from a young Donald Trump, heckling him about his birth certificate from across Fifth Avenue.

Speaking of Trump, he’s feeling heat after his little buddy Rudy Giuliani suggested what Trump won’t admit publicly – that the Republican presidential candidate believes Obama was born in America. He’s still not as hot under the collar as Canuck actor Kiefer Sutherland, though, who was spotted on a non-air-conditioned TTC subway car.

Gala Gawking: Liam Neeson takes a break from saving various family members from kidnappers to star in a film about helping a child in a different way, teaming with Sigourney Weaver in the children’s book adaptation A MONSTER CALLS, about a kind monster who befriends a boy whose mother is dying. Meanwhile, Natalie Portman and Lily-Rose Depp – yes, that’s Johnny’s 17-year-old daughter – channel 1930s Paris while playing spiritualist sisters in PLANETARIUM. And in one of the most anticipated films of the fest, Oscar winner Lupita Nyong’o stars alongside David Oyelowo in QUEEN OF KATWE, the real-life story of a young Ugandan girl’s quest to become a chess champion.

The Sleeper Hit: THE SKYJACKER’S TALE. And what a tale it is. This almost too-crazy-to-be-real Canadian documentary examines the murder trial of Ishmael Labeet, convicted in the murder of a group of oil executives and tourists in the Virgin Islands in 1972. Rather than head to prison, Labeet hijacked a plane to Cuba. And he still lives there today, a free man. This documentary sheds fresh light on the politics and policing surrounding the murders and convictions and leaves one to wonder if, with the U.S. and Cuba kissing and making up in recent months, Labeet’s time as a free man is winding down…

BARRY: Hot on the heels of Southside With You, which chronicled the blossoming romance between future U.S. President Barack Obama and First Lady Michelle Obama, the world premiere of Barry goes even further back, depicting the president’s years as a student at Columbia University in the early 1980s.

THE BLEEDER: Live Schreiber, 48, stars as New Jersey-born boxer Chuck Wepner, famed for his capacity to take punishment in the ring, in this biopic about the human punching bag who proved the inspiration for Rocky. Schreiber’s real-life wife Naomi Watts, 47, and Elisabeth Moss, co-star as two of Wepner’s wives.

I AM THE PRETTY THING THAT LIVES IN THE HOUSE: You’ll never complain about having to massage the corns on granny’s feet again after seeing this Canadian/American horror flick about a caregiver for an aging writer (Paula Prentiss, 78) who begins to suspect that she also serves as the murder victim in the writer’s new novel.

THE LIMEHOUSE GOLEM: Based on the best-selling novel by Peter Ackroyd, this Victorian thriller delves into a series of murders supposedly committed by the golem of Jewish legend and the detective, played by Bill Nighy, 66, tasked with solving them.

Honourable mention: The Icelandic thriller THE OATH, about an older father’s attempt to save his adult daughter’s life from spiraling out of control.

Think outside the [Light]box: Well, technically you have to be inside the Lightbox for this one, and you have to be a TIFF member, but it’s worth it. HIDDEN FIGURES LIVE features a Q&A with the stars of the upcoming film about the real-life African American NASA math geniuses who helped plot the Apollo 11 moon landing. Taraji P. Henson, Octavia Spencer and Janelle Monáe will be there, along with Pharrell Williams, who orchestrated the film’s soundtrack and will perform some of the songs on Festival Street after.

For non-TIFF members, check out IN CONVERSATION WITH… ISABELLE HUPPERT, the famed 63-year-old French actress who stars in three TIFF offerings this year: Elle, Løve’s Things to Come and Souvenir.

Snapshot: Naomi Watts shines on the red carpet for L’Oreal’s Women of Worth event while Leo DiCaprio walked between the streetcar tracks on King Street.

Spending my morning with #naomiwatts and @lorealmakeup, NBD. 😻 #TIFF