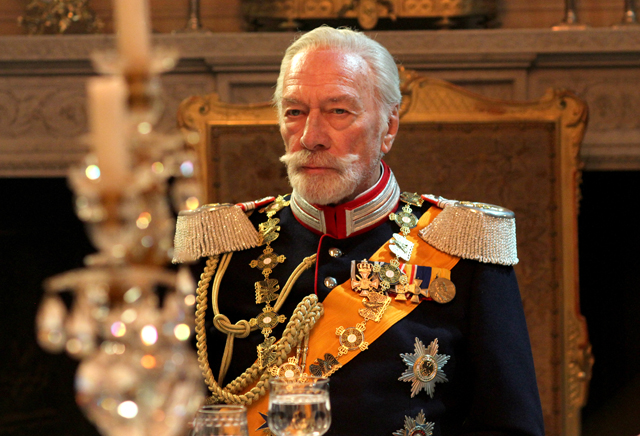 Christopher Plummer in "The Exception"

Gala Gawking: The day’s first gala goes to Vanessa Redgrave, 79, who stars as a patient at a Irish mental institution who unravels the stories of her tumultuous past, lost loves and passionate faith in THE SECRET SCRIPTURE, also starring Eric Bana, Rooney Mara and Jack Reynor. Then, Meathead from All In the Family directs dimwitted bartender Woody from Cheers in a presidential drama. Woody Harrelson, 55, steps into President Lyndon B. Johnson’s shoes following the assassination of President John F. Kennedy Jr. in LBJ, directed by Rob Reiner, 69, and co-starring Jennifer Jason Leigh, 54, as Lady Bird Johnson.

The Sleeper Hit: Last year at TIFF, Canuck acting legend Christopher Plummer played an unlikely Nazi hunter in Remember and this year he explores the fallout of the First World War in THE EXCEPTION, where he stars as the last German Kaiser, Wilhelm II, who lives in exile in the Netherlands when the Nazi SS, led by Heinrich Himmler, pay him a visit.

TIFF Fave Three: Our top three picks for the day are…

ZACMA: BLINDNESS: A 60-something former Polish communist official, who once oversaw torture of political dissidents, is desperate to meet with the country’s highest ranking Cardinal as the fall of the Iron Curtain forces her to face her past.

LION: Nicole Kidman, 49, Dev Patel and Rooney Mara star in the biopic of Saroo Brierley, an Indian man who used Google Earth technology to find his birth parents half way around the world two decades after he was adopted.

SALT AND FIRE: This film by Werner Herzog combines stunning locales, tense drama and a volatile volcano in a thriller about the kidnapping of environmental researchers that turns out to be the least of their worries.

Snapshot: Sure Gerard Butler, 46, is dashing, but his very little THE HEADHUNTER’S CALLING co-star Ethan MacIver-Wright has already pretty much figured out how to charm an audience on the red carpet.

Our little friend Ethan MacIver-Wright on the #TIFF16 red carpet for THE HEADHUNTER'S CALLING 👋📸 pic.twitter.com/Q1li3XEuzS