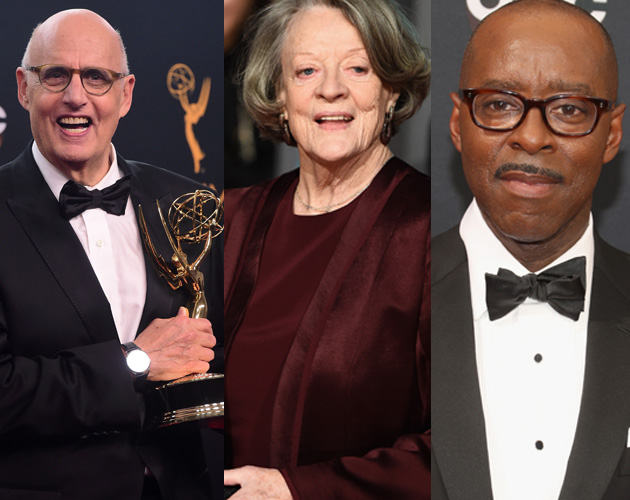 Dame Maggie Smith wins again! We look at some of the highlights of the 68th annual Emmy Awards in Los Angeles.

1. Driving Mr. Kimmel
It came as no surprise that host Jimmy Kimmel roasted Donald Trump on more than one occasion. But it was during the opening montage that Kimmel got in his best anti-Trump gag—and he enlisted the help of Trump’s one-time foe, Jeb Bush.

In the sketch, Kimmel is being driven in a limo to the Emmy ceremony by the former GOP presidential candidate. “Did you know you can now make $12/hour driving for Uber?” Bush asked.

“If you run a positive campaign, the voters will ultimately make the right choice,” he continued. “Jimmy, that was a joke—and shave that wig off your face you godless Hollywood hippie.”

Check out the full sketch here.

2. Stranger than fiction
With her fifth consecutive win for Outstanding Actress in a Comedy Series for her role in Veep, 55-year-old Julia Louis Dreyfus gave one of the most memorable speeches of the evening.

Not only did the visibly shaken Louis-Dreyfus reveal that her father, William, had passed away on Friday (“I’m so glad he liked Veep because his opinion was the one that really mattered,” she said tearfully), she also riffed on the current political climate.

“I’d like to personally apologize for the current political climate. I think that Veep has torn down the wall between comedy and politics. Our show started out as a political satire, but it now feels like a sobering documentary,” she said, to laughter and applause.

Watch her full speech below.

3. Marcia, Marcia, Marcia
It was expected that awards show darling Sarah Paulson would finally take home her first Emmy for Outstanding Actress in a Limited Series or Movie for her much-lauded performance as prosecutor Marcia Clark in The People vs. O.J. Simpson: American Crime Story.

But her touching speech was the real highlight. Paulson, who brought the real Marcia Clark to the ceremony as her plus one, dedicated her award to the woman she portrayed—and issued a public apology on behalf of America.

“The more I learned about the real Marcia Clark, not the two-dimensional cardboard cutout I saw on the news but the complicated, whip-smart, giant-hearted mother of two who woke up every day, put both feet on the floor and dedicated herself to righting an unconscionable wrong, the loss of two innocents—Ron Goldman and Nicole Brown—the more I had to recognize that I, along with the rest of the world, had been superficial and careless in my judgment. I’m glad to be able to stand here today in front of everyone and tell you I’m sorry.”

4. The verdict is in
It looks like the “losers” in the O.J. Simpson trial came out on top. In an already huge night for the critically-acclaimed The People vs. O.J. Simpson: American Crime Story (see Sarah Paulson’s win) a visibly moved Sterling K. Brown took home the Emmy for Outstanding Supporting Actor in a Limited Series or Movie for his role as prosecutor Christopher Darden.

“I was talking to Melania Trump this morning and I was asking her, ‘What should I do, what should I say?'” he joked, before getting serious: “A lot of you may not have known who I was, but you checked the box anyway.”

And to his wife, he said, “I got the hottest chick in the game rocking my chain.”

Brown’s win was followed by his 56-year-old co-star Courtney B. Vance, who took home the Emmy for Outstanding Actor in a Limited Series or Movie for his portrayal of charismatic (and, not to mention, controversial) defence attorney Johnnie Cochran.

In a rousing speech he thanked the huge cast and crew of the series, ending with a shoutout (that hilariously echoed Brown’s) to his longtime wife, Angela Bassett: “To the woman that rocks my chain, Angela Evelyn Bassett, this one is for you, girl!”

5. How do you like them apples?
The entertaining “feud” between Matt Damon and host Jimmy Kimmel quickly escalated after Kimmel lost Outstanding Variety Talk Show to John Oliver. After the loss, Kimmel had to continue his hosting duties—but Damon wasn’t quite ready to let it go just yet. The actor walked across the stage, noisily chewing on an apple: “I missed the last category. Did you win?”

The fake feud dates back to the inception of Kimmel’s show in which the host got into the habit of closing out every episode with, “Apologies to Matt Damon, we ran out of time.” The joke quickly caught fire and snowballed into one of the most entertaining “feuds” in Hollywood.

6. “Lame” Maggie Smith
Once again, 81-year-old Dame Maggie Smith won an Emmy for Outstanding Supporting Actress in a Drama Series. And, once again, she wasn’t on hand to accept the award. Host Jimmy Kimmel joked that the notoriously absent Smith, who plays the quick-witted Dowager Countess Violet Crawley in Downton Abbey, be called “Lame” Maggie Smith for having also skipped out on her previous three wins.

When Smith’s name was announced, Kimmel marched across the stage and said, jokingly, “No, no, no, no, no! We’re not mailing this to her. Maggie, if you want this, it’ll be in the lost and found.”

7. Luck be a lady tonight
“I have not always been a very good man, but I play one hell of a woman,” joked 63-year-old Louis Anderson. The comedian was on hand to accept his award for Outstanding Supporting Actor in a Comedy Series for the show, Baskets. In the series, Anderson plays Christine, the mother of the character played by Zach Galifianakis. This is Anderson’s third Emmy win, but his first in a live action series. He’d previously won for Outstanding Performer in an Animated Program for the series, Life with Louie.

8. Two for Tambor
In what was arguably the most touching speech of the night, Jeffrey Tambor, 72, won Outstanding Actor in a Comedy Series for his role in Transparent.

“I’m not going to say this beautifully,” he said. “To you people out there…please give transgender talent a chance. Give them auditions. Give them their story. Do that. I would not be unhappy were I the last cisgender male to play a female transgender on television. We have work to do.”

The shoutout to the transgender community was met with rapturous applause, and Tambor immediately started trending on social media. This marks Tambor’s second Emmy. His first was last year for the same role.

9. Blue redux
In a welcome surprise appearance, former NYPD Blue costars, Jimmy Smits, 61, and Dennis Franz, 71, appeared on stage to hand out the final award of the night (Outstanding Drama Series, which went to Game of Thrones). Franz quoted his famous line from the first episode of the series, “Ipsa this!” Social media, as expected, lost their collective minds. Nothing like a little nostalgia to liven up an awards show.