The Fairytale Romance of Brad Pitt and Angelina Jolie 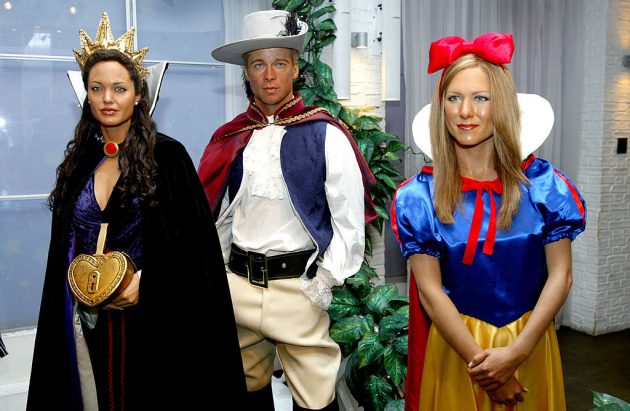 This is a story of a beautiful couple and their epic romance of 12 years.

This is the timeline of how it all started and ended, with the announcement this week it was over. As told in words—and pictures—for those who are too broken up and over-come with tears to read. Once upon a time, there was a celestial couple, Brad Pitt and Jennifer Aniston, that lived in a far, far away land called Hollywood. The married duo, with their magnificent good looks and lustrous blond hair, seemed made for each other and were hugely popular in their homeland and other lands far, far away. They were anointed the Golden Couple, seemingly because they radiated sunshine wherever they went—as they did here at the 56th Golden Globes back in the January 1999. But then one day, in January 2005, came shocking news that sent the people of Hollywood and other far, far away lands into despair, gnashing of teeth and much sorrow. It was announced that the Golden Couple would be no more. They were splitting. Going separate ways. Tired of each other. However you wanted to put it—they were done with each other. How could this happen, asked the people across the lands. The people began to take sides. It’s her fault, they declared—because he wanted children and she didn’t want any. No wonder he wanted to leave this poor sad barren self-centred wench, they cried. But then came news later, that the golden haired boy had actually met the cunning charms of a raven haired beauty, known as Angelina Jolie, on the set of a movie they had filmed together called, Mr & Mrs Smith. No match for the witchery of this dangerous damsel, the Golden Boy apparently fell under her spell and conducted a torrid affair with her during filming—and whilst being married to the Golden Girl—which essentially made him a cheater. How dare he, cried the people. How could he hook up with this one-time drug user, twice married temptress, who has dubious taste in men (Billy Bob Thornton) and peculiar fetishes (wearing vials of blood and kissing her brother on the lips at an awards show)? Well, words were thrown around by this trio about each other. But it essentially amounted to nothing more than school yard name calling. Brad said he was bored with life with Jennifer, wasting away the days just sitting on the couch smoking pot. While Jennifer, commenting on Brad’s blonder hair colour, said that Billy Idol called and he wanted his hair style back. Angelina remained tight-lipped and not until years later in an interview said that they fell in love while filming Mr & Mrs Smith, confirming what was suspected, that Brad had cheated on his wife, Jennifer. And the people in the many lands pretty much dubbed Jennifer as the innocent, pure as Snow White princess, Brad as the cavalier but handsome prince and Angelina as the icy queen/witch. This was brilliantly captured in wax, as seen at the legendary museum, Madame Tussauds in London. But by 2006, the romance of Brad and Angelina looked like it was no ordinary fling. His divorce to Jennifer now finalized, Brad showed he was serious about his new angel Angelina, by adopting her children, Maddox and Zahara. Before the year was over, Angelina would give birth to their first biological child, Shiloh Nouvel Jolie-Pitt, in a far, far away land called Namibia. The Brangelina romance would continue to grow strong as the couple adopted another kid and Angelina gave birth to twins. Their happy family would now consist of six children—as seen here rushing through yet another Japanese airport with their movie star parents. The kids were now pressuring their parents to get married. Brad and Angelina—in a show of solidarity and equality—had always wanted to wait until gay marriage was legalized before they tied the knot. However, in 2012, they announced their engagement. By 2013, Angie is now deemed a saint. Not just an A-list actress, she is now also a humanitarian campaigner. Also that year, she revealed in a New York Times op-ed that she chose to undergo surgery for a double mastectomy after she discovered she had a defective BRCA1 gene to minimize the risk she might develop breast and ovarian cancers. Her partner praised her heroic efforts and she is seen here supporting him during the UK premiere of his movie, World War Z.

In August 2014, Brad and Angelina tie the knot in a secret ceremony at their home in France and then went on a honeymoon in Nice. Their children participated in the ceremony by writing and drawing on the bride’s veil and dress. We’re unsure how the designer of the gown—the House of Versace—felt about that. But what ever happened to the other half of the duo, once known as the Golden Couple? Well, far from disappearing into the sunset, Jennifer Aniston, through it all kept a smile on her face—well, at least in public —met a nice gentleman, named Justin Theroux and eventually married him in August 2015. And the fairy tale romance would have come full circle with happy endings for all, as Brad and Angelina celebrate the premiere of the movie, By the Sea, in 2015, their first movie together since the fateful, Mr. & Mrs. Smith. But the circle is not to be closed just yet. Because today in the land far, far away called Hollywood, an earthquake of sorts shook the land with the tremor-inducing announcement that Angelina Jolie had filed for  divorce from Brad Pitt, citing irreconcilable differences.

Once again, there is much wailing and crying and gnashing of teeth. What have we done to deserve this?, cried the people in the many lands. Stay tuned because, undoubtedly, this fairy tale might get more interesting as details emerge.