Look of the Day: Royal Family Are Picture Perfect At Kids Party 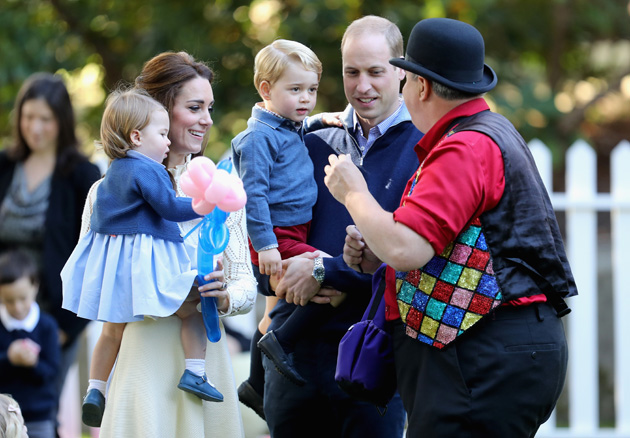 The royal family attended a children’s party for military families today (September 29) on the beautiful green grounds of Government House in Victoria, BC. Prince George, 3, and Princess Charlotte, 16 months, were treated to balloon animals, puppet shows and pony rides, along with about 24 other lucky kids. The families who were invited to attend have loved ones currently serving in the Canadian Armed Forces.

George wore his signature shorts and knee-socks, paired with an adorable little blue sweater while Charlotte wore a blue dress from Pepa and Co. with a cardigan. The Duchess of Cambridge was clad in a cream-coloured See by Chloe dress paired with wedge heels.

Social media is buzzing with pictures and videos of the royal family.

Do we think Lupo gets this a lot at home?! #PrincessCharlotte bounces up and down on Moose the dog! #RoyalVisitCanada #RoyalTourCanada pic.twitter.com/oaYynWwOE4