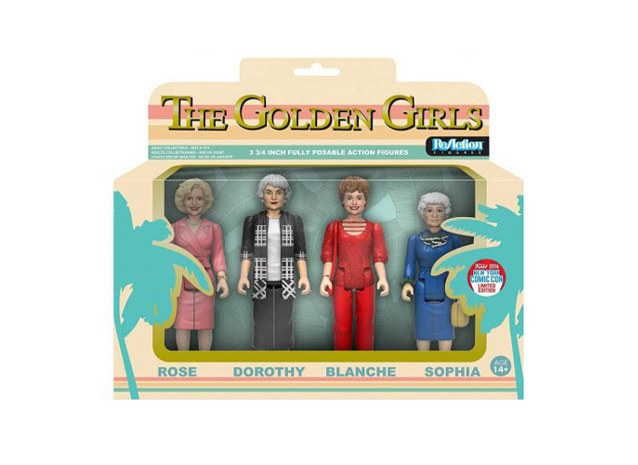 They’re more united than The Avengers and more entertaining than Suicide Squad, so perhaps it’s no surprise that a Comic Con exclusive box set of Golden Girls action figures flew off shelves at the famed fan fest in New York this past weekend.

A raffle was held at the event to slim the crowd looking to purchase the set of four figures—featuring Dorothy, Blanche, Rose and Sophia—which went for $25 (U.S.), selling out almost instantly at a convention known far more for comic book costumes and devoted sci-fi aficionados than fans of a decades-old sitcom about four senior citizens living in Florida.

Yet, the force of nostalgia is strong in this one, a fact made abundantly clear when a 2010 online petition to get the only surviving member of the series—former Zoomer cover subject Betty White—to host Saturday Night Live was met with success.

Since then, White, now 94, has reached the status of pop culture legend, starring in everything from films to the successful sitcom Hot In Cleveland to hosting her own reality TV prank show, Betty White’s Off Their Rockers. Retailer Target also sold a limited supply of the action figures, and their stock was depleted within a day.

“I don’t think we were prepared for how excited people would be,” Mark Robben, Director of Marketing for Funko, the company that makes the figures, told the Wall Street Journal. “We wanted them to be limited, but we didn’t know they would go that quickly in the morning.”

The outlet also notes that the idea for the action figures was originally met with resistance at the toy company, with some questioning who would want action figures of four senior citizens. The answer is clear—more people than the supply can keep up with. Further to that, some of the action figures are already for resale on eBay, with some reporting a mark-up from $25 to $350.

The Wall Street Journal notes that White herself hasn’t seen the action figures but, going forward, Funko may have more Golden Girl action figures on the way—including a “surprise” fifth character.