Between the Lines … with Charles Bronfman 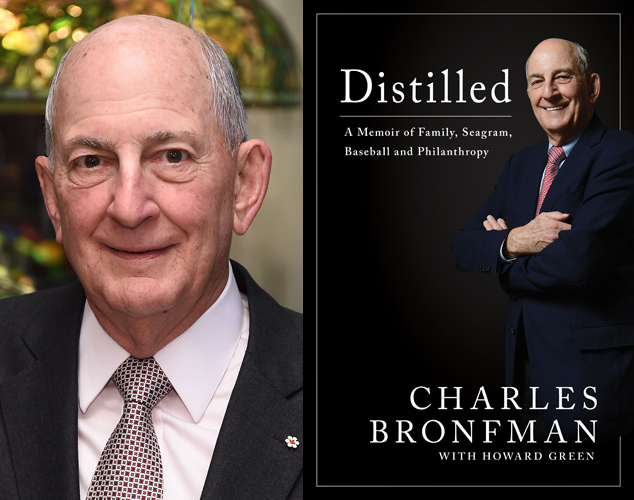 From heir to his family’s Seagram’s liquor empire to the first owner of the Montreal Expos to noted philanthropist and the man behind those famous Heritage Minutes TV shorts – you know, “Doctor, I smell burnt toast” – Charles Bronfman’s life could fill a book. It’s fitting, then, that, at 85, Bronfman’s entering the literary game with Distilled: A Memoir of Family, Seagram, Baseball and Philanthropy. He recently spoke with Zoomer.

MIKE CRISOLAGO: Why was it important for you to leave this record of your life for your grandkids?

CHARLES BRONFMAN: Because I thought that it was incumbent upon me to let my grandkids know who the heck their grandfather is. I’m 85 years old. Who knows when the grim reaper is going to be after me. And I don’t run as fast as I used to, so you never know.

MC: What did you learn about yourself when you were writing this book?

CB: I think I learned that I may have started off very slowly and very inhibited in a lot of my actions. But I’ve had a number of careers that have been very interesting and exciting. I don’t think [many] people go through life at senior positions in three or four different areas. And all quite different areas, in business, in philanthropy, in sports and in … what was the last one? In writing. [Laughs]

MC: You also were the driving force behind the famous Heritage Minutes on televison, which began in the 1980s. How did those come about?

CB: I spent a lot of time in the United States and the real religion of the country is … country. And I will agree that Americans go too far with it, in my opinion. They wrap themselves in the flag … But in Canada, even in the 1980’s, Canadians had no measure of themselves. And we’ve had a lot of immigrants come in post-World War II and they didn’t know much about who they were or whether this country that they now belonged to had any real heritage. I’ve always believed that any society, in order to be a good society and an honourable society, has to have some heroines, heroes. And that’s really how the [Heritage Minutes] came about. It was really through the back and forth between the United States and Canada.

MC: To this day, people will still talk about, “Oh, my gosh. I smell burnt toast. Am I okay? Does anybody else smell that?” And that’s because of the Heritage Minutes. Or that they know that Superman and Winnie the Pooh have Canadian roots.

CB: The first one was the Underground Railroad, which was an amazing story. I didn’t know most of these stories, by the way. I didn’t know about Superman in Canada. I certainly didn’t know about the invention of basketball being a Canadian thing … One of the big problems that we had and still have in Canada is that Canadian history has been the dullest damn thing that we ever learned in school. And it’s a very exciting bloody story. So why aren’t we taught history as a participating sport as it were? And live it? And live who these characters all were?

MC: Growing up, you were in the front row of history yourself in many ways, from being one of the first private citizens to receive penicillin as a sick child to watching the King and Queen of England drive a car down your street to hearing about the outbreak of the Second World War while playing in your driveway. When you were recalling these moments for the book did it hit you as to how historic some of these moments were?

CB: Actually, no. You know, I’m a very visual person. I still remember my mother standing at the window of the hospital in Montreal, part of the Royal Vic, in tears, as I was lying in that bed and very sick. My eyes were too tired to open and it hurt too much to close them. And then I had the scene of the guy coming in to put the needle in my butt. That’s what I was thinking of, not history. It was very personal.

MC: Speaking of personal, you have a very personal connection to baseball in this country as you helped bring it here with the Montreal Expos. How much do you miss baseball in that city?

CB: I really don’t. You know, you go through … 22 years in baseball. And the first fifteen were great, the last … not pleasant at all. I’m friendly with some of the owners. I love being a fan. And, you know that is really enjoyable. I feel very badly for Montreal that the team has gone. They could not have survived under any circumstances for any longer … And, well, it’s just one of those things.

MC: There’s a resurgence now of a fan base that wants to bring a team back to Montreal. Would you like to see that?

CB: Well, I think we would all like to see it, for sure. Whether it’s viable or not, I really don’t know. I know things are better than when I left, because now there is much more revenue sharing than there used to be … Either an existing team will have to move or there will be expansion. And [the] expansion price will be very high. And then somebody has to build a stadium. So I just don’t know. I’ve never looked at the financial part of it but it’s steep. It could be done. But whether it will happen or not, I have no idea.

MC: The other thing that you talk about in the book, and that you’re known for, is your great philanthropic spirit. There are many wonderful causes you’ve either spearheaded or donated to or worked with in different capacities. Why is it important for you to give back?

CB: Well, I never think of it that way. I think of it as investing. I’m a citizen, and I’m a Jew, and I want to invest in my country and I want to invest in my people. So I don’t think about it as giving back at all. I can afford to have a return in terms of elevating of people’s spirits. And I don’t mean that in terms of alcohol. [Laughs] Rather than having a return of dollars on investment. It really doesn’t matter whether, you know, it’s a thousand dollars or it’s a million dollars, as long as people give damn about their society. It’s really the crux of our societies.

MC: Lastly you wrote in the book that, “Only in my later years have I begun to feel satisfied with who I am as a person and who I’ve been.” How you were you able to find that peace and how you might advise others at that stage in their lives to go about doing the same?

CB: Well, a lot of people like themselves early on. I didn’t. I felt an inferiority complex. I was shy. I was very frantic. I ran and ran, chasing my own tail a lot. But then I started to calm down. I think it was my marriage to the wonderful woman I’m married to now that really helped me settle down and say, ‘Who in the heck are you?’ And I said, ‘Yeah, you’ve … led a pretty damn good life. You’ve learned a lot.’ I always think that one learns from mistakes, not from victories. You’ve made your mistakes, and you’ve come a long way and you’re an okay guy.

Distilled: A Memoir of Family, Seagram, Baseball and Philanthropy is available in stores and online Oct. 25.