Margaret Atwood On Reimagining Shakespeare with Her New Novel, Hag-Seed 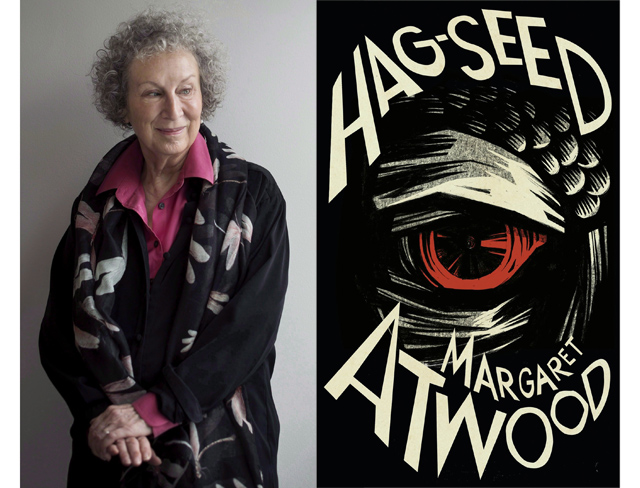 Margaret Atwood, Canada’s Queen of Letters, tackles Britain’s Bard with her contemporary retelling of The Tempest.

A celebrated theatre director, a lost daughter and a prison full of inmate actors—these are just a few of the ingredients in Margaret Atwood’s Hag-Seed, a retelling of Shakespeare’s The Tempest.

Yes, Canada’s Queen of Letters tackles Britain’s Bard as part of the Hogarth Shakespeare series, in which contemporary bestselling authors reinterpret the playwright’s works. It’s the second literary release in as many months for Atwood, who last month launched Angel Catbird Volume 1—the first of her new three-part graphic novel series.

Zoomer recently sat down with Margaret Atwood in Toronto.

MIKE CRISOLAGO: Why did you choose to adapt The Tempest for this project?

MARGARET ATWOOD: This is the closest Shakespeare ever came to writing about writing or, shall I say, making a play in which the central character is the maker of a play…In the middle of the play, which is a revenge play, Prospero decides it’s going to be a forgiveness play. And that’s typical of late Shakespeare, in that he takes motifs that’s he’s explored in a tragic way earlier and makes them come out what we call a romance ending—a resolution that is not tragic. It’s reconciling…The Tempest, which is a Hamlet revenge play—’I’m going to get these people back’—he does get a bit of revenge but then he says…’I guess I’ll do forgiveness.’

MC: What sort of pressure comes with adapting Shakespeare?

MA: Big pressure. You know that every Shakespeare nut on the planet is going to be on your case if you really mess it up. But I tried to remain faithful to the elements, including the fact that everybody in that play is in a prison of some kind, including Prospero, who is in a double prison. So that was fascinating, and I did a lot of reading around it and a lot of watching of every Tempest movie I could get my hands on.

MC: Would it be more difficult to deal with the Shakespeare nuts for Hag-Seed or the comic fans with you new graphic novel Angel Catbird?

MA: Oh, I think the Shakespeare nuts. The comic people are pretty accepting, unless of course you were dissing comics. But I grew up in the comics culture, which anybody under the age of 60 pretty much didn’t. They may have grown up in a segment of it but not in the pervasive comics culture that was the 40s and early 50s. Everybody read them—these big colour supplements in the newspapers on the weekends. Pogo was a huge deal in the 50s and took on McCarthyism, just for instance, and everybody followed Li’l Abner in the 40s and early 50s so it was grown-ups, boys, girls—it wasn’t confined to any one group.

MC: Did you have a favourite comic book hero?

MA: I was a Batman person. Superman—he just was a superhero. They had to invent Kryptonite because there had to be some sort of a challenge for him to overcome, but Batman had many more challenges. But my all-time favourite was probably Plastic Man, because he was funny. But I liked Captain Marvel when he was going. And at one point there was a villain trying to take over the world who was this little worm—he had a radio set that he talked through and he was a super smart worm…There were all of these wartime comics and in Canada there were these black and white ones, things like Johnny Canuck, Nelvana of the Northern Lights, Brok Windsor, all of those – a lot of Nazi fighters amongst them. Wonder Woman…was a big Nazi fighter in her day—went in to fight the Nazis without a top on, practically, which I wouldn’t have done but never mind that.

MA: These two recent books of yours—Angel Catbird and Hag-Seed—seem as though they’re bridging two different generations. Perhaps mom and dad would be reading Hag-Seed while the kids or grandkids read Angel Catbird.

For more of our interview with Margaret Atwood, covering Angel Catbird and comics, click here.

Hag-Seed and Angel Catbird is available in stores and online.