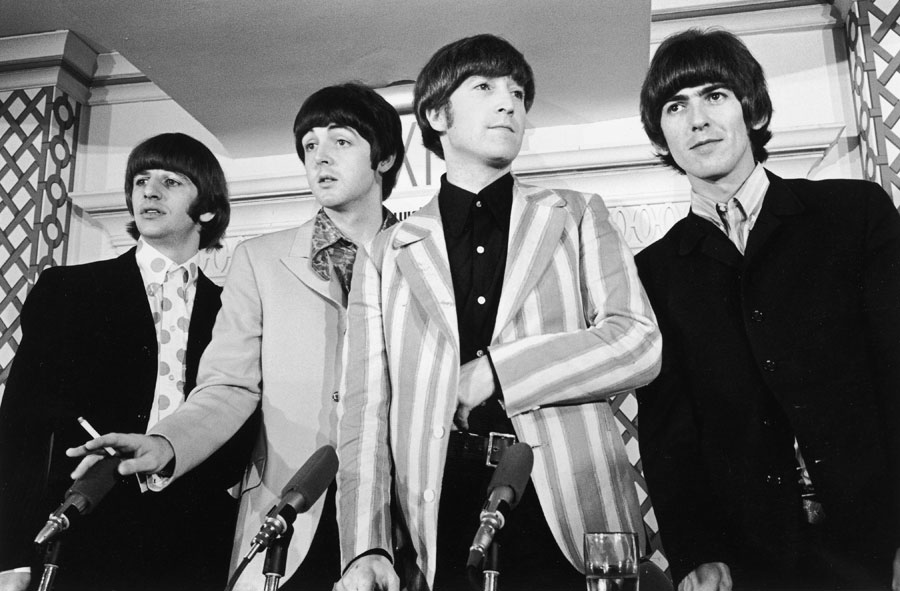 Picking a band name is no easy task: it defines you as artists and, once you’ve settled on it, you can’t simply discard it once your career is underway. (Well, you can, but it wouldn’t necessarily be wise.)

Lucky for us, most of our favourite groups have interesting back stories. Whether it’s finding inspiration from sewing machines or beer ads or “lead balloons”, here are the fascinating (and often bizarre) stories behind some of the world’s biggest bands.

Contrary to popular belief, the name AC/DC is not anti-Catholic. Despite the rumours that ran rampant when the Australian band made their debut in 1973, the letters don’t stand for “Anti-Christ/Devil Child” or “Anti-Christian/Devil’s Crusade” or any other random satanic messaging.

In fact, the real story behind the name is decidedly more mundane: The abbreviation is actually borrowed from an old sewing machine. …Really.

Lead guitarist and founding member Angus Young is well-known for his penchant for wearing schoolboy uniforms on stage, dating back to the band’s inception. In fact, during the group’s early days, Young’s uniforms were handmade by his sister. And stuck onto the side of her sewing machine was a sticker that read AC/DC, an abbreviation which referred to the “alternating current/direct current” electricity—hence the high voltage lightning bolt that separates the “AC” and “DC” in all artwork pertaining to the band.

Young thought the name sounded cool and suited the raw, power-driven sounds of the bands live performances. So, rock on, Alternating Current/Direct Current. Back in the late 1950s, Brian Wilson and co. were known as The Pendeltones, a play on the spelling of “Pendleton” (a style of woolen shirt) and “tone” (as in the musical term). Not very exciting, is it?

In 1961, Herb Newman, owner of Candix Records and Era Records, agreed to release the bands single “Surfin'” (later rerecorded as “Surfin’ Safari”) under one stipulation: that the fivesome change their name to The Beach Boys to cash in on the increasing popularity of surfing and beach culture among teens.

While it’s not uncommon for record executives to weigh in with their thoughts on band names or song titles, what makes this instance so unique is that the name change caught the band completely unawares: they didn’t realize they’d gone from The Pendletones to The Beach Boys until after they saw the cover art for their single. As jarring as it was, the boys took the abrupt name change in stride.

Depending on which Beatle you’re talking to, the origin story of the band’s name differs greatly. The more widely-accepted version of events is that John Lennon suggested it in April 1960 after a solitary walk through the park. He said he was partly inspired by the insect-like name of Buddy Holly’s band, The Crickets, and thought The Beatles would work well. (Lennon later changed the spelling of “beetles” to “beatles” so it could be like a “beat” in music.)

However, Paul McCartney and George Harrison remember it differently. They claimed inspiration struck during a group screening of The Wild One, the 1953 biker film starring Marlon Brando. There’s a line where Lee Marvin says to Brando, “Johnny, we’ve been looking for you. The Beetles have missed you.”

Regardless of which version of events you believe, McCartney later discovered that “beetles” (as referenced in The Wild One) is actually slang for “motorcycle girls” in biker culture. If that’s the case, then those mop-topped “Motorcycle Girls” sure made quite the name for themselves on the music charts!

Have you heard of a Golliwog? It’s a fictional children’s character from nineteenth century literature. Created by Florence Kate Upton in the late 1890s, the character—a black rag doll dressed in formal minstrel attire—has since been (rightfully) called out as racist.

Yet, for some reason, the band we now know as Creedence Clearwater Revival (or CCR) thought The Golliwogs made for a solid group name—they even wore white afro wigs on occasion. In the early 1960s, the band toured as The Golliwogs before wisely deciding to shelve it and start from scratch.

By 1968, they’d returned to the music scene as Creedence Clearwater Revival. Borrowed in part from John Fogerty’s friend, Credence Newball, and an Olympia beer TV ad that professed to use “clear water” in their brewing, the final “revival” part of the name referenced the foursome’s newfound commitment to the band.

The iconic Jim Morrison-led band was one of the biggest American psychedelic rock groups in the world during their tragically short reign on the charts (1965-1973).

The name was inspired by Aldous Huxley’s 1954 philosophical essay about a mescaline drug trip he experienced called The Doors of Perception, which itself is taken from a line in William Blake’s 1793 poem The Marriage of Heaven and Hell: “If the doors of perception were cleansed, everything would appear to man as it is: infinite.”

In the beginning, there were three Charterhouse School alumni (a prestigious private school in Surrey, England) who formed an underground progressive rock band in 1967. At the time, they’d briefly toyed with the idea of calling themselves Gabriel’s Angels after flamboyant original lead singer and flutist, Peter Gabriel.

It was ultimately record producer (himself a former Charterhouse pupil) Jonathan King who came up with the name Genesis while watching the band play a live show in 1968 when the group was just out of school.

As King later explained, “[I] thought it a good name…it suggested the beginning of a new sound and a new feeling.” He later produced Genesis’ first studio album, From Genesis to Revelations (1969).

Have you ever heard the phrase “go down like a lead balloon”? It’s used to describe a bad idea, or something that was poorly received. It’s most often used among musicians during an audition process.

Enter: Keith Moon of The Who. The famous drummer received an invitation to try out for an (at the time) nameless new band on the British rock scene. Moon allegedly scoffed at the idea, saying an audition for this band would go over like a “lead zeppelin.”

Whether Moon unintentionally confused the wording of the expression or whether it was done on purpose remains unclear, but guitarist Jimmy Page took an instant liking to it and suggested it as the young band’s name.

Page and Robert Plant quickly opted to change the spelling of “lead” to “led”, lest audiences pronounce it incorrectly.

The iconic rockers went through a handful of names in their early days. First, they were the Screaming Abdabs (British slang for a “mystery ailment”) but the clunky name thankfully didn’t last long. Then they went by the bland and uninspired The Tea Set, only to find out that another aspiring band had already nabbed the name (yes, really).

Back at square one, founding member Syd Barrett suggested a combination of his two favourite blues musicians—Pink Anderson and Floyd Council. It immediately got a thumbs up from the quartet we now know as Pink Floyd. But, in keeping with their ever-changing tastes, they initially went by The Pink Floyd Sound before finally shortening it. Yes, the jazzy duo named themselves after a sex toy.

The Velvet Underground was actually the title of a 1963 investigative story by American journalist Michael Leigh. The book chronicles the underground sex scene in early-1960s America, complete with tales of S&M and swingers culture. The rockers came across a copy lying on the sidewalk during a stroll in New York. And the rest, as they say, was history.