So Long, Leonard: “You Want It Darker” Sadly Turned Out To Be His Swan Song 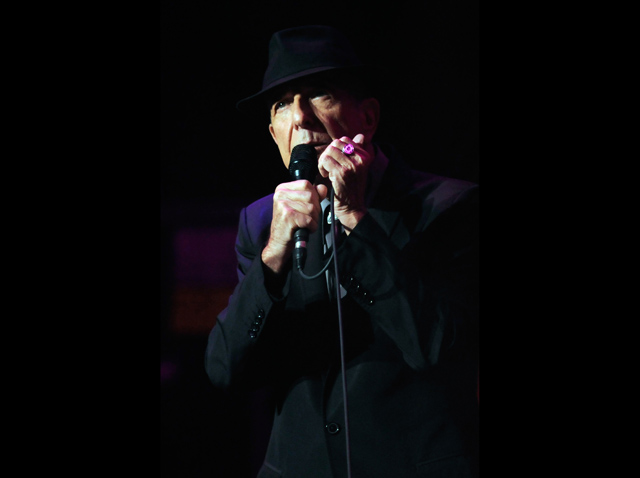 Leonard Cohen has passed away at 82, weeks after the release of You Want It Darker.  Here, read our recent review of the album.

“Don’t dwell on what has passed away, or what is yet to be…” – Leonard Cohen, Anthem

We can’t say that Leonard Cohen didn’t warn us. After a decades-long career built on beautifully crafted, melancholy ballads with a sharp focus on death and loss, the legendary troubadour’s latest album, You Want It Darker, comes with a bittersweet caveat – it may turn out to be his last.

And not Cohen’s last because he’s run out of ideas or because he wants to do more acting or a reality show or any of the creative turns entertainers take in an effort to remain relevant. No, Leonard Cohen is preparing his fan base for the fact that one day – hopefully, not anytime soon – he is going to expire.

“Maybe I’ll get a second wind, I don’t know. But I don’t dare attach myself to a spiritual strategy,” Cohen said in a recent New Yorker interview. “I’ve got some work to do. Take care of business. I am ready to die. I hope it’s not too uncomfortable. That’s about it for me.”

That’s a little darker than we wanted it.

Just a few short years ago, Cohen was literally bounding across stages, running and bowing and falling to his knees and then hopping back up again during sold-out world tours – a happy consequence of his late career renaissance.

Today, having turned 82 in September, it’s no secret that multiple spinal compression fractures have left Cohen mostly housebound, prompting his son, Adam, to bring the recording studio to him to lay down vocals for his latest disc. But talk of death, though fitting for an album titled You Want It Darker, is terribly dismaying to fans, despite the fact that it’s not without precedent.

Artists have long shown a penchant for facing the final curtain while their audience is still enjoying the show, be it Freddie Mercury’s heartbreaking “The Show Must Go On” from Queen’s final album, recorded as the singer was dying from complications due to HIV-AIDS or Johnny Cash’s poignant rendition of the Nine Inch Nails tune “Hurt” and its accompanying video depicting both the singer and his wife, June, in failing health (they’d both pass away within a year) or David Bowie’s Blackstar, a goodbye of sorts to his fans before passing away from cancer earlier this year.

With Cohen, though, it’s the vague, yet repeated, suggestion of mortality and scant accompanying details beyond his spinal compression fractures that make the concept so difficult to wrap our collective head around.

The first notion of Cohen’s mortality-focussed mindset came this past July when his former muse and lover Marianne Ihlen, of “So Long, Marianne” fame, passed away. A letter Cohen wrote to her in her final days became public, including the sentiment, “… it’s come to this time when we are really so old and our bodies are falling apart, and I think I will follow you very soon.”

In September, in an interview with Maclean’s magazine, the singer-songwriter answered the question of whether You Want It Darker will be his last album with the Cohen-esque quip that “at this stage in the game, you know that all your activities are subject to abrupt cancellation.” In the New Yorker, he notes that, “Sometimes it’s just like: ‘You are losing too much weight, Leonard. You’re dying but you don’t have to co-operate enthusiastically with the process.’ Force yourself to have a sandwich.”

And finally, on the title track to You Want It Darker – hailed, as his last two albums, Old Ideas (2012) and Popular Problems (2015) were, as brilliant – Cohen exclaims, “If you are the dealer, I’m out of the game … Hineni, hineni/I’m ready, my lord,” forcing the listener to accept the irony that this artist, for whom age only serves to illuminate and strengthen his creative spirit, inhabits a body reacting in the exact opposite manner to the passage of time.

Of course, people have been predicting that any given album is Leonard’s last for decades, be it in the mid-late 1990s, when he spent five years at the Mount Baldy Zen Center monastery in Los Angeles or after either of his last two albums or recent world tours, which left some wondering how long into his 80s Cohen could keep this pace up.

And, at the same time, we can’t allow the selfish want for more poetry, for more music, for wanting it darker and darker and darker, to cloud the fact that perhaps Cohen has reached a point where he simply wants to spend his remaining time – be it months, years, decades – in peace, caring for himself and spending time with loved ones.

“As I approach the end of my life, I have even less and less interest in examining what have got to be very superficial evaluations or opinions about the significance of one’s life or one’s work,” he says in The New Yorker. “I was never given to it when I was healthy, and I am less given to it now.”

As a fan of Cohen’s, like countless others I hope for more time and more music. In a desperate moment, one might even declare, “Hey, that’s no way to say goodbye!” But ultimately, while grateful for the artistic output, we all hope for what’s best for Leonard.

In the New Yorker, he extolls the virtues of putting one’s house in order. “It’s a cliché, but it’s underestimated as an analgesic on all levels. Putting your house in order, if you can do it, is one of the most comforting activities, and the benefits of it are incalculable.”

The sentiment is yet another piece of a larger puzzle surrounding Cohen’s state that remains a mystery – fitting really, for this enigmatic troubadour. Cohen, throughout his career, has always preferred to speak in hymns, rarely allowing the public to peer into the deeper, more private realms of his being. Still, while “you want it darker” is the current mood, as Cohen once sang, there’s a crack in everything. That’s how the light gets in.

You Want It Darker is available in stores and online Oct. 21.