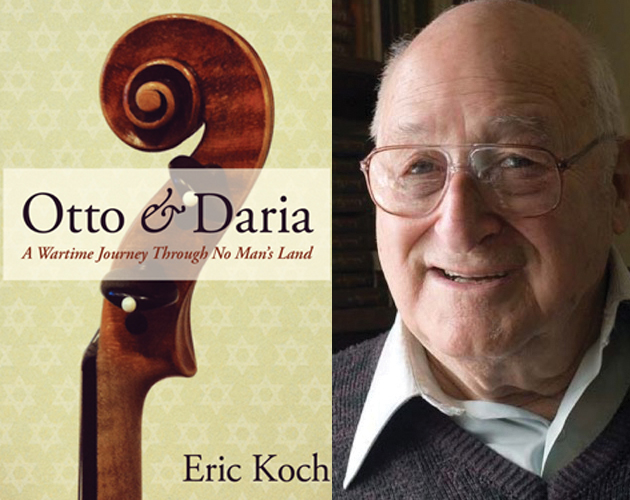 This Remembrance Day, Eric Koch has much to remember.

His life began 97 years ago in Frankfurt, Germany and his life in Canada began in 1940 when he was sent to Montreal from England to be interned as an enemy alien, along with other Germans, including (ironically) some Nazis.

The former CBC producer and prolific author published his first novel at the age of 60.

His latest book, the memoir Otto & Daria: A Wartime Journey Through No Man’s Land, documents his escape from Nazi Germany and his wartime experience in England and Canada. It’s also a story of lost love and lost opportunities.

The days around Remembrance Day have a special significance for him—and for the world, he says.

“I will tell you what Remembrance Day means: November 11, 1918 was the end of the First World War. November 9, in 1923 was the first Hitler putsch in Munich. November 9, 1938, was Kristallnacht. On November 9, 1989 the Berlin Wall came down. These days in November, these are big days in the history of the world.”

On a more personal level, he says, “My father was a decorated officer in the German army. When he came back in November 1918 at the end of the war, there were revolutionaries at the Frankfurt railway station who removed his Iron Cross and the medals from his uniform because he was Jewish.”  He adds, mischievously, “And that night I was conceived!”

Eight decades after he became a refugee from the Nazis, he’s concerned about the refugees from Syria.

“Fear about them is hysterical nonsense,” he says. “People are afraid or reluctant to welcome them because they’re of a different religion and come from a different world.”

But there is cause for fear these days, he says, observing from his venerable position what’s happening in the world this November.

“I am in despair, and not only because of [Donald] Trump,” he says. “I’m extremely frustrated and impatient with people I meet who don’t share my feelings of extreme fear and sadness. I have gone through the Nazi period and there is no question that Trump is a fascist.”

Fortunately, he says, the social and political situation is very different from Europe in ’30s and ’40s.

“What is so terrible, so utterly awful, is that for the moment the kind of liberalism and decency that we in Canada regard as our lifeblood, has been suffocated by Trump and the people who follow him. Americans have been going after liberals for a long time. Now any kind of generosity or tolerance is considered elitist. It’s an ugly, ugly atmosphere.”

He continues, “I’m not so much worried about war. What worries me is that this a big setback for decency. The guy got the job by demagoguery and lying. And he has no idea about what to do with the power he wanted. I cannot tell you how upset I am about this.”

Koch is hard at work on a new novel. He writes every day between nine in the morning and noon. What motivates him? “Vanity,” he says, “and avoiding boredom.”

He won’t say what his next novel is about, but who would be surprised if one of the characters is a fascist demagogue?