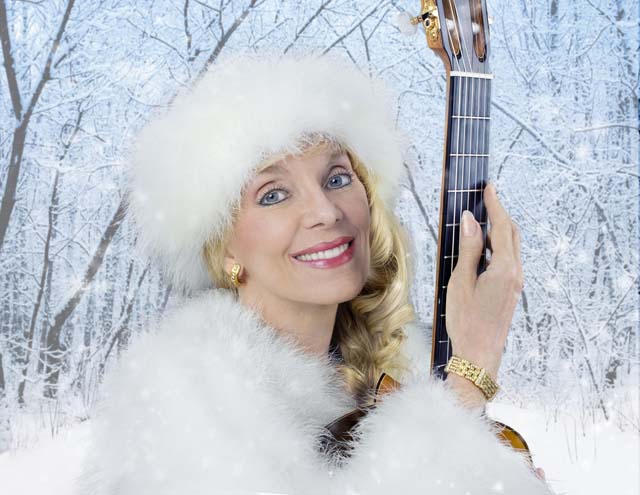 Mere months after Liona Boyd’s bone-breaking fall in Palm Beach, this Snowbird rises again with a new tour that takes her across Canada this winter.

Seven months ago Liona Boyd lay the floor of her garage in her Palm Beach winter home, her shoulder and knee shattered after a slip on a piece of cardboard. Alone, she cried for help while, in the kitchen, a pot of sweet potatoes boiled unattended on the stove. “Lying on the ground, helpless to even raise myself,” the award-winning Canadian classical guitarist recalls, “my predicament terrified me more than the pain and sight of spiked protruding bones.”

Improbably, a block and a half away, a man on his balcony heard Boyd’s plea and hurried to her aid. Nine days, one titanium shoulder plate, 11 screws and a few wires in her knee later, Boyd recuperated in Toronto, composing music and receiving well-wishes from friends, including her pen pal of more than 30 years, England’s Prince Philip. She met the monarch through her one-time beau, and former Prime Minister, Pierre Trudeau, and he’s one of only three people – the others being her producer and her 91-year-old mother – who hear demos of her songs before she releases them.

Though the accident pinned her down temporarily, Boyd, 67, has experience at navigating and overcoming later-life roadblocks, such as how, at age 60, following her divorce, she battled a neurological disorder that threatened her ability to play guitar. She’s also adept at taking later-life leaps, including taking the nerve-wracking step of singing in public for the first time in 2009.

“Nobody in my family sings. I was thrown out of a choir when I was seven. I used to lip-synch ‘Happy Birthday.’ I had absolutely zero confidence that I could ever sing anything and here I am – every night I’m singing with choirs. It’s never too late to reinvent yourself.”

With that spirit in mind, only months after the titanium and wires went in this new “Bionic Boyd” is back on the road, touring Canada beginning Nov. 20 on her A Winter Fantasy tour.

“I’m going to appreciate every moment I’m on the stage,” she says, cheerily noting the “infusion of energy” she receives from her accompanist, 25-year-old classical guitarist and singer Andrew Dolson, whom she first discovered on the cover of a magazine.

At the same time she looks forward to 2017, which brings a new album of love songs – including some, like a tribute to Gordon Lightfoot, that she wrote while in the hospital – and a second autobiography, both titled No Remedy For Love. “I love the creative process,” Boyd exclaims. “This is my impossible dream … I like to push myself, I like to challenge myself. I feel very lucky.”

Of course, personal goals also abound – more travel, hopes of finding her soul mate and, like a true snowbird, a return to her winter home in Palm Beach. However she reassures me, “I’m going to watch very carefully where I put my feet.”