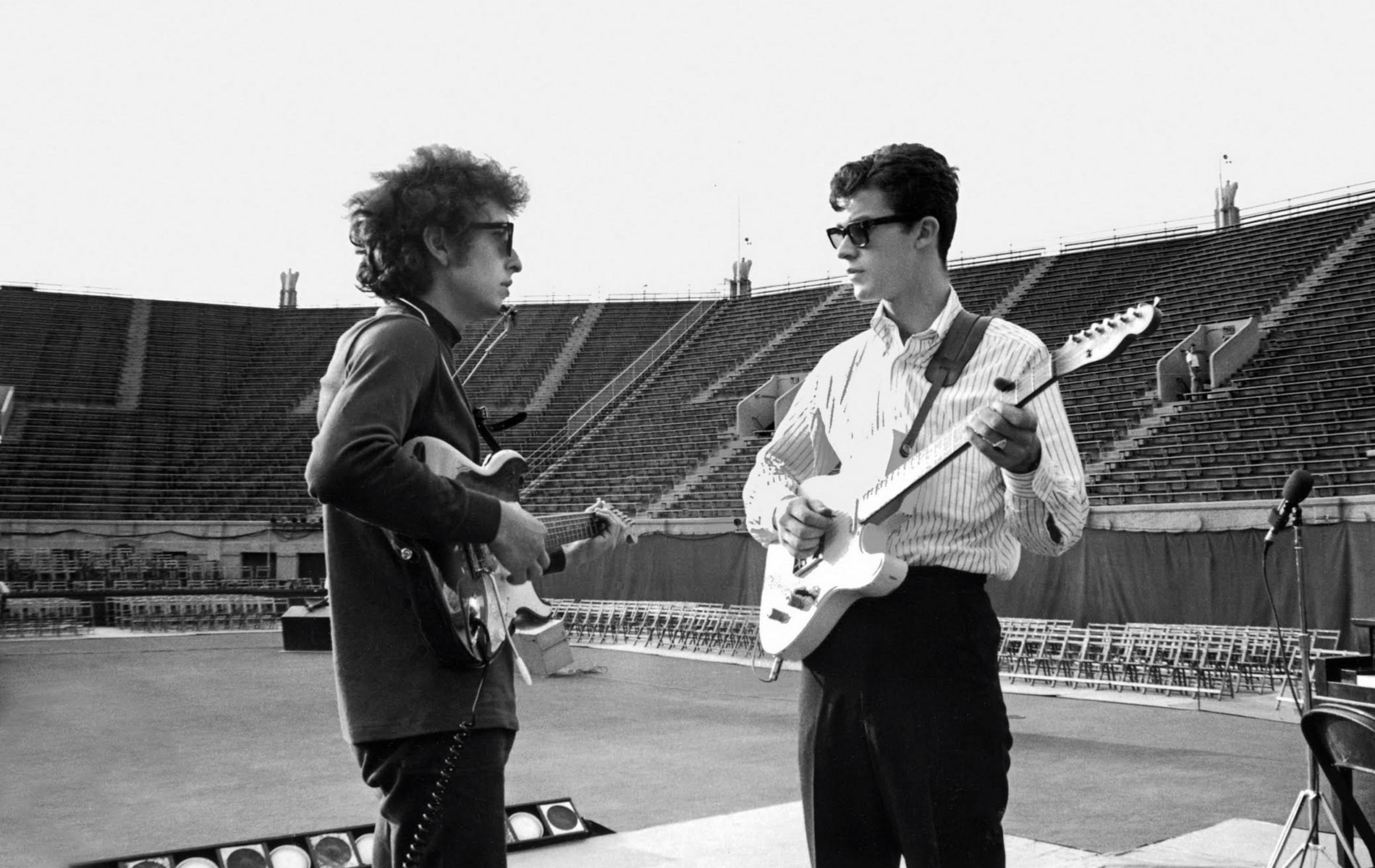 In 1965, Bob Dylan—acoustic folk hero—went electric. In an excerpt from his memoir, Testimony, Canadian music icon Robbie Robertson shares what it was like to take part in this seminal moment in rock history.

On August 28, at Forest Hills Stadium in New York, we took the stage for our afternoon sound check. It was a huge tennis stadium that had been reconfigured for live events. It held maybe twelve or fifteen thousand people, a far cry from the clubs we’d grown so accustomed to on our circuit. Our sound echoed loudly through the empty stadium, and I asked Bob if he could hear himself well enough.

“Nah, but that’s okay. Just remember, tonight, don’t stop playing, no matter what.” He said it like we were going into battle.

As the hours passed, you could feel the scale of the event building. Albert Grossman seemed to be everywhere at once, checking last-minute details. The other Hawks showed up to see what Levon and I had gotten ourselves into; they too seemed awed by the size of the stadium. But I was worried less about the big crowd than about how we’d play, and how they’d react. We had heard what had happened at the Newport Festival with Bob and the Butterfield Blues Band: Bobby Neuwirth, Dylan’s road manager, said Pete Seeger had wanted to pull the plug on them—but that was at a folk-music show. Not knowing what would happen tonight made for a tense backstage vibe that felt exciting and unnerving at the same time. Bob went out and played the first half of the show doing his acoustic set, and it sounded real good. It gave us some confidence that the show was going well; all we had to do in the second half was follow through. As soon as we hit the stage and plugged in, the audience unleashed its fury.

From the first notes of the first song, “Tombstone Blues,” people started booing viciously. I looked at Bob, but he just shrugged. People charged toward us, like they were staging a massive coup in an imaginary war. We followed Bob’s advice and didn’t stop playing “no matter what.” Some people busted through the barricades and got on the stage, knocking Al Kooper over. Albert was directing security to help hold the crowds back. Bobby Neuwirth was waving frantically, like we might have to make a run for it. I looked over at Levon, who just shook his head. Harvey [Brooks, on bass] saw this and started laughing, and I couldn’t help but laugh too. Soon even Bob joined in, because this whole thing was too far gone to comprehend. I thought, What’s the big deal? Let the man play his music how he wants. This was such a strange situation, and Levon and I had nothing to compare it to; these folk traditionalists were rabid. We felt like we were on a desolate island where cannibalism hadn’t been outlawed yet.

Afterward, Bob assured us our next gig at the Hollywood Bowl in a few days should be a lot better: people out there in Los Angeles, he said, would be more open-minded. The Los Angeles band The Byrds had released a cover of Bob’s song “Mr. Tambourine Man” a couple months earlier, paving the way for what some were calling the “folk-rock movement.” Perhaps this was a sign we were just a little too soon with our “electric” current.

When we landed in Los Angeles, it did feel more welcoming. I’d never been there before, and I happily found the Sunset Strip alive with hundreds of people gathering in the name of a new day and dancing in a potion of love, peace, music, drugs, and sex. What truly blew my mind was the sheer number of kids: the Strip was overflowing with them, some smoking weed, some heading to the Whisky a Go Go, some with no money to be doing anything except hanging out. Los Angeles was open and spacious. A youthful, hopeful, almost dreamlike feeling was in the air.

Musicians, actors, hipsters, and more came by to see Bob, with his friend Victor Maymudes sometimes leading the charge. The photographer Barry Feinstein, who was married to Mary Travers of Peter, Paul and Mary, brought the best reefer I’d ever had. The Hollywood Bowl was big, beautiful, and of course legendary. It felt like an honor just to be performing in this world-famous venue.

“This is so strange,” I said to Levon before we went on.

“Never felt anything like this, man,” he responded. I had never seen my friend look more unsure of the ground he was standing on. As we walked out onstage for the second half, the audience seemed to be waiting for a cue. A murmur ran through the crowd, cresting in a couple of shouts: “Go home!” “No rock ‘n’ roll!” After we played the first song, I looked out at the crowd and noticed something odd. People would look around and try to boo louder than one another, laughing and screaming with anger like this was a game or part of the show. Individually they didn’t seem offended by the music; it was more of a mob mentality—”When Dylan goes electric, you boo.” Jeering was just a thing to do. I saw it, and I got it. From that moment the cheers and jeers no longer affected me. I pushed it all aside and got lost in the music.

After the show, Al Kooper and Harvey Brooks seemed to think it had gone better than in New York. Bob and his team and various friends felt reasonably good about it. All the talk rolled off me. What did bother me was I knew we could play this music better, and I could tell Levon felt the same, though it probably wouldn’t have made that big of a difference to an audience distracted by its own agenda. Bob had done his best, pounding those amazing songs out with all the firepower he could, but as a band we didn’t have it yet.
I didn’t say much at the time because we had only signed on for these two gigs. But when Levon and I returned to New York, I got a message. I told Levon, “Bob called and said they’re booking an additional fifteen dates, and they want us to do the tour.”

Levon laughed. “I would have thought he’d learned his lesson by now.”

“Yeah, I told Bob we couldn’t do it. We have our own band, and that’s what we’re all about. But he says he wants to meet me tonight at a bar in the Village. I’ll see what’s up.”

I had walked by the Kettle of Fish on Macdougal Street before but had never been inside. It was known as a gathering place for members of the beat generation as well as musicians. By the time I got there, the place was hoppin’. Dylan was with his road manager, Bobby Neuwirth, and they had a table staked out near the back. Bob was in good spirits and very funny, pointing out characters in the bar and making up elaborate backstories about them. Neuwirth jumped right in. They made cutting, sharp jabs, and the whole thing seemed like a routine between them.

Neuwirth ordered some wine and Bob asked me straight out if I could do his upcoming tour. I told him again that the Hawks were a close unit and we were on our own mission; I would never do anything to get in the way of that. Neuwirth interjected that I could come back to “the Hawks thing” later; playing with Bob was a big deal, and the Hawks’ future was a big “maybe” at best.

“That’s not the way I look at it,” I said. “We’ve been through so much together, and we’re gonna see it through. I’m sure you’ll find some guys that will play well with Al and Harvey.” Bob said that he didn’t think he’d use those fellows on the tour, that they seemed more suited for the studio. (I heard a couple of days later that Al Kooper didn’t want to do the tour. He thought playing music under these circumstances could be dangerous and took a pass.)

Without having really discussed it with the guys, I took the liberty of saying the only way I could consider doing the tour would be if the Hawks were the backing band. “It’s kind of an all-or-nothing situation,” I told Bob.

“Whoa, how do we know that these guys could even cut it?” Neuwirth said.

“You don’t. Bob would have to come hear us play.”

“In Toronto next week. We’re playing a club there.”

“Really? Yeah, maybe I could do that.”

“Well, we’re going into the studio tomorrow to record some new songs. I’ll talk to the boys and see what they think,” I responded.

“Did you write the songs?” Bob asked.

“Yeah, I do most of the writing, although I’ve been a little strapped for time with all that’s going on. Richard, Rick, and Levon do the vocals. They’re all really good singers. Garth and I take the solos.” On September 15, Bob Dylan came up to Toronto with his girlfriend, Sara Lownds, to hear the Hawks play live. I set them up in a discreet corner of the Friar’s to check us out. We played pretty good that night, and when we finished our last set at 1:00 a.m., Bob put Sara in a taxi to go back to the hotel. As she was leaving, she told me that she really liked our music and hoped that everything would work out. Sara was kind of a quiet type, with a mystical side. She had dark hair, fair skin, and sad eyes. I thought it was very sweet what she said, and I knew she didn’t have to do that.

After the club had emptied out, we got a mic for Bob and plugged in his guitar. Some of the songs on his records had particular arrangements we tried to follow, though that wasn’t necessarily our strong suit. Never playing something exactly the same way twice was more up our alley. We played a few tunes through —”I Don’t Believe You,” “Just Like Tom Thumb’s Blues,” then “It Ain’t Me Babe”—which he had played acoustic in the past.

As we ran through the material, it sounded a bit messy; we didn’t know the songs that well. I tried to help lead the arrangements by giving signals, waving my guitar neck and playing a little louder on the chord progressions. We played the songs with no concrete beginnings or endings. Bob would usually start strumming away to set the tempo, and we would stagger in when we got a feel for the rhythm. I suggested that when we neared the end of the song, Bob could give me a nod and I would signal the boys that we were coming in for a landing. We ran through about ten tunes before Bob put his guitar down and called it a night.

He returned to the Friar’s the next day for another session, and as we kept running through the songs, I could tell we were drawing somewhat closer as a unit. I was enjoying Bob’s singing and the level of intensity this collaboration brought to the songs. He wasn’t too fixated on details or fussy about how tight we were. Finally he appeared to have heard enough.

“Yeah, that sounds pretty good. So why don’t we do this first tour and see how it goes. What do you think?”

Truth be known, we didn’t know exactly what to think. But we all agreed to give it a shot…

Excerpted from Testimony by Robbie Robertson. Copyright © 2016 Jaime Robbie Robertson. Published by Alfred A. Knopf Canada, a division of Penguin Random House Canada Limited. Reproduced by arrangement with the Publisher. All rights reserved.