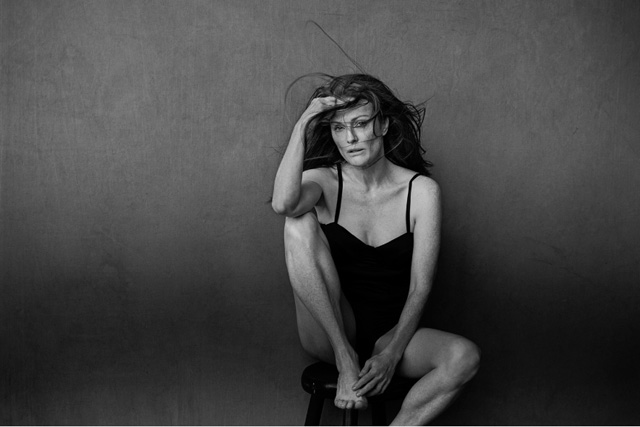 The concept of “baring it all” in the name of beauty can be interpreted in many ways. Victoria’s Secret, for instance, parades a bevy of models young enough to be your granddaughter up and down a runway in their annual, star-studded fashion show, wearing nothing but undies and something called a “Fantasy Bra”—a $3 million bejewelled undergarment that’s far too pricey a piece of lingerie to be found dangling from the blade of a bedroom ceiling fan.

The flip side of the coin is the upcoming famed Pirelli Calendar which, for its 2017 instalment, boasts a who’s who of 45-plus stars—Helen Mirren (71), Charlotte Rampling (70), Julianne Moore (55), Robin Wright (50) and Nicole Kidman (49)—all of whom feature in photos au naturel, sans styling or touch-ups. “I walked in with no makeup on and wet hair,” Moore says in the video above, “and [photographer Peter Lindbergh] is like, ‘No, no, no, you’re perfect.'”

As the Victoria’s Secret Fashion Show’s models boast angel wings, the Pirelli Calendar celebrates crow’s feet. While Pirelli photographer Lindbergh declares, “I want to do something which is like a cry against the terror of perfection and youth,” a man in the crowd at the Victoria Secret show collected his drool-laced jaw off the floor and declared, “That was the happiest thirty minutes of my life.”

When it comes to “baring it all,” Helen Mirren—a 71-year-old in an industry where they’re liable to start shovelling dirt on you if you’re a woman over 50 who isn’t dolled up to look 20 years younger—is far more exposed while wrapped in a blanket with only her untouched, creased face visible to the camera than any 20-something model whose trainer and team of stylists prepped them to walk a runway in bejewelled undies.

Beauty isn’t makeup and hairstyling and choreographed struts in skimpy lingerie—it’s the absence of it. It’s authenticity, not fantasy, and the courage to put it on display. In fact, they say that beauty is just skin deep. But so are crow’s feet and, unlike a $3 million bra, we’ve all got, or will have, them. Someone let Victoria know. After all, it’s no secret.