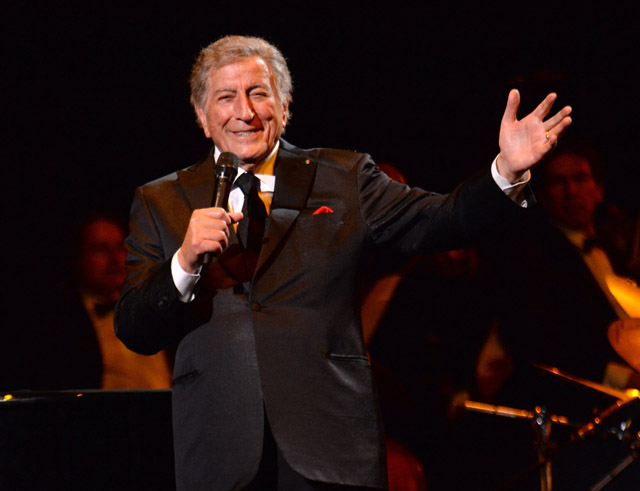 In 1926, Hollywood legend Greta Garbo made her big screen debut, Winnie the Pooh hit bookshelves and little Anthony Dominick Benedetto — re-christened Tony Bennett by Bob Hope years later — was born in New York City. Ninety years on, Garbo’s taken her final bow while Winnie’s snacking on his umpteenth honeypot. Bennett, however, hasn’t slowed down, touring and releasing music and most recently pegged as a possible duet partner for his pal Lady Gaga when she performs at the Super Bowl in 2017 (he’d become the oldest performer in the event’s history if he does).

All year long Bennett’s been feted with 90th birthday celebrations, including a star-studded Radio City Music Hall bash — taped in September — that airs on NBC on Dec. 20. The former Zoomer cover subject recently took some time to discuss his milestone year.

MIKE CRISOLAGO: Congratulations on your 90th birthday and all the celebrations this year. What does 90 feel like?

TONY BENNETT: It feels beautiful. I feel like I’m 45. My doctor kicks me out of his office. He said, “You’re too healthy.” [Laughs] I’m very fortunate.

MC: You’re also one of the last remaining performers of your generation and something of a bridge between generations. Does that add significance to your performances?

TB: Thank you. It’s wonderful because the [entertainment] media put the accent a little too much on the young. They keep saying the thing that sells the most, is the biggest, is the young, and I just feel wonderful that at my age, at 90, I’m more popular now than I’ve ever been in my whole career. So it’s just a blessing.

MC: Speaking of blessings, your Radio City birthday tribute featured everyone from Stevie Wonder to Lady Gaga serenading you. How did that feel to be celebrated by those luminaries?

TB: I loved it. In fact, I love performing in Radio City more than any place in the world. It’s such a great theatre. It’s always a joy to be in that theatre, and then to have all those great artists, one after another. Each one was a show stopper. I just loved the whole moment.

MC: There’s a new box set of your songs coming out – Tony Bennett Celebrates 90: The Deluxe Edition. Are there any songs that hold a special meaning to you?

TB: Yeah, there’s a song called [singing] “Why do people fall in love? What makes the feeling first begin?” It’s a beautiful song. The whole secret of it is how well the song is written, and that’s what I’ve done my whole career. I had to fight for just doing quality songs, and my record company was always upset with me because they’re, “Come on, do the Beatles songs.” I say, “Well, that’s their songs. I just do quality songs.” And when you listen to my whole catalogue there’s not one bad song.

Next: Tony Bennett on the notion of retiring…

MC: When you look toward the future, do you ever consider retiring?

TB: Oh, no. I know this is going to sound funny, but it’s very, very true – I have an awful lot to learn yet.

MC: Do you mean musically or in life?

TB: Everything. Just life in general. You keep learning all the time.

MC: What sort of things do you find yourself picking up as you go?

TB: I can’t get over nature. It’s so fantastic, you know? It’s bigger than all of us. Every leaf of the trees in Central Park – when I look out the window and just see how there’s nothing the same. There’s no such thing in nature as a straight line. It’s not only beautiful, but it’s alive.

MC: I have to ask you, since it’s been in the news, about the rumours that you’ll become the oldest performer ever at next year’s Super Bowl, performing with Lady Gaga…

TB: Well she made a public announcement. She said, “I’d love to have Tony Bennett on this Super Bowl with me.” I don’t know if that’s going to happen, but I’d love to do that [Laughs]. That would be beautiful. She’s a great friend.

TB: I think you word it well. It’s a beautiful icing on the cake. And that’s all it is. It’s something that wow, you don’t expect that. But there it is.

MC: Absolutely. Does performing and recording feel as exciting to you today as it did 50, 60 years ago?

TB: Even more because of my age.

MC: What sort of advice would you give to people for aging well?

TB: Well, I think it shows in the moment that I’m performing, at the end of the performance and I hope that [the audience] feels like I feel – it’s just a gift to be alive. It’s not regret, it’s not tragic. It’s a miracle to be alive at 90 and feel well and have all that energy that still goes on.

TB: Oh, I love my grandchildren. They teach you so much. As little babies, the first thing they do, when they get to know you, is they smile. And I always feel regrettable that they don’t keep that smile their whole lives, [because] they’re so happy to be alive. And I wish that people would feel that way throughout their whole lives.

MC: If you wanted, you could be a stay-at-home grandfather and hang up your microphone.

MC: Of course. So what drives you to keep performing?

TB: I just love it. I like to make people feel good. There’s so many things in life that bring the public down and make them unhappy. And the one hour that I perform I try to lift up their spirits and make them feel good about life. And when they feel good, I sleep well.