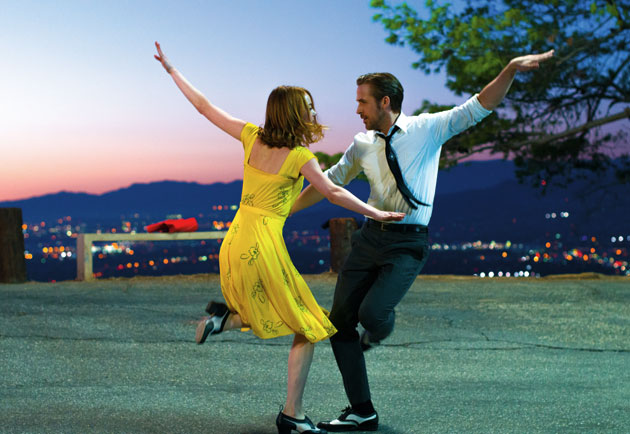 Blessings were given; bread, broken.

In preparation for Ryan Gosling’s newfangled gaga-causing musical La La Land—a technicolour throwback—he made a call to Gene Kelly’s widow. Enjoying dinner at Patricia Ward’s house with others involved in the film, the made-in-Canada charmer was shown many of Kelly’s personal things, including a leather-bound copy of his Singin’ in the Rain script.

Written on one particular page in Kelly’s handwriting were some ideas for the now-famous title sequence in Singin’. “Hand umbrella to a passerby when the number’s done,” it read.

“As grand and as legendary as that number is,” Gosling grinned at the memory, when he was at the Toronto International Film Festival this past fall to premiere his own Oscar shoo-in, “it’s sort of amazing to remember [the details] sometimes come down to one guy making notes in a script.”

What’s that they say about the devil again?

As it happens, La La Land—expertly cinching together an in-love-with-love ethos with an all-out ode to the City of Angels—is a film that borrows more than a bit from Old Hollywood, including a hat-tip to Gene in the very first dance-off between Gosling and his leading lady, Emma Stone. In that scene, his character does a “hey, look at me” whirl around a lamppost.

Rain or no rain, the callback is clear—as is the case that the film is making for a movie musical renaissance. And not just one that parrots other such efforts on this side of the millennium—neither the jukebox acid-trip that was Baz Luhrmann’s Moulin Rouge nor the jaunty stage-to-film Chicago, in which Bill Condon put the songs, more or less, in the imagination of its antiheroine, Roxie—but one that could conceivably have poofed right out of the Turner Classic Movies channel. (Though there are, indeed, modern-day winks here, like a tap-dance number set at sunset on Mulholland Drive, which gets interrupted by a familiar iTunes ringtone.)

Big Emotion. That’s what distinguishes La La Land for so many. A “complete lack of restraint, cynicism or self-consciousness invites viewers to drop their own reservations and just feel the big, broad, simple emotions as they’re played out on-screen, through memorable songs and elaborate fantasy sequences” is how a review on the website, The Verge, put it.

“Umbrellas of Cherbourg,” La La Land‘s director, Damien Chazelle, confirmed, when I spoke to him about his inspirations, referring to the floaty French film from 1964, starring Catherine Deneuve as a girl who works at an umbrella shop.

“It’s one of my favourites,” the natty, young filmmaker said, going on to discuss the movie with me at a sprawling post-premiere do held poolside at Lavelle in Toronto.

Chazelle—who’s 31 but clearly an old soul—already has much critical goodwill in his tank, thanks to his 2014 film, Whiplash (it received six Oscar nominations, including Best Picture), which, while not a musical per se, is set in the world of music. A nut for vintage Hollywood and an L.A. as formed by the movies, he, no doubt, sees himself as translator of sorts for his generation.

“I find the old musicals so timeless, and so it’s amazing when you put Singin’ in the Rain on for a little kid. It’s just that they have no idea that they’re looking at a movie that was made over a half century ago,” he’s pointed out before. “So, I think obviously those movies are rare, but I definitely didn’t want it to be a museum piece. I know I have it in me to definitely live in the past of movies and I think that’s why it was important to try to shoot as much of it as possible and really use L.A. as it is today.”

“Some Bollywood in there, too,” I snapped back to him when we were talking, referring to the over-the-top musical production that gets La La Land going, consisting of an exhilarating 100-plus person montage of people singing and dancing on the ramp of a L.A. freeway. (The scene, by the way, had only one full dress rehearsal, and they only had two days to shoot it—during a heat wave!)

What both showy Bollywood and those old-school musicals from the MGM factory had in common, we agreed, was that they depend on a “suspension of belief” (as goes the term in the critic’s arsenal). But what both also share in common, it struck me later, is that these movies not only depend on belief’s suspension, but they also both engender and enable it. While some people frankly will never be able to get their head around the very idea of people bursting spontaneously into songs and crowds of strangers performing perfectly choreographed dances, it’s also obvious to me that perhaps it’s something that’s learned, if I may go so far as to say.

The history of Hollywood musicals is nothing if not varied, comprising some of the earliest movies in the post-silent film era—in fact, the first sound film The Jazz Singer in 1927 led to all those Fred Astaire-Ginger Rogers combustions (example: 1935’s Top Hat, in which Fred and Ginger showed off their moves in a screwball comedy). Later, it thickened to include some of the most enduring films of all time, such as The Wizard of Oz and Meet Me in St. Louis and the aforementioned work of Kelly including his groundbreaking 1951 American in Paris. The ’60s, meanwhile, brought gems like The Sound of Music and West Side Story, packing theatres and winning Oscars, only to face a bit of a slackening when a so-called “naturalism” began to take over the cinematic form—the rise of Marlon Brando and all that.

Like dandelions rising from winter’s earth, musicals never quite died. The year 1978, for instance, churned out Grease (Sandy and Danny, forever!), and the ’80s brought us Footloose (even, though, in the latter case, that title might well be classified less as a conventional musical than just a movie with music). The whole rise of MTV, it’s been argued—and that wheelhouse of short, conceptual videos set against pop songs—had a profound effect on what audiences wanted from their “musicals” and also how they would consume them, inspiring any number of movies that are more dance-centred movies than song movies (everything from Flashdance to Billy Elliot to the Step Up franchise).

For millennials, meanwhile, nothing did more than the recent TV series, Glee, to rev up an appreciation for the musical form. For many, their first introduction to a classic like Funny Girl likely came from Glee‘s leading lady, Rachel Berry, who was obsessed with Barbra Streisand.

Theatre, meanwhile, has rarely waned in its ability to be an energy source for movie musicals. Exhibit A: 1969’s Sweet Charity, which—having garnered nine Tony nominations when it ran on Broadway just three years prior—emerged as a high-energy movie bar, starring Shirley MacLaine (as a taxi dancer looking for love!). The theatre-to-film symbiosis has continued with Les Miserables, Sweeney Todd and Into the Woods. Not to mention the upcoming Disney animation-to-stage-to-live-action musical Beauty and the Beast.

And, now…a one-way ticket to La La Land. With awards buzz agog for the Gosling-Stone two-hander, what jazzes musical lovers the most, I think, about the film is that it is not based on a theatrical production. Someone thought to make an original project! The genre lives!

A love letter to mid-century musicals of yore, there’s a scene in La La Land in which its two charming leads literally dance…on air. Watch for it. It’s not corny. It’s not quaint. It’s simply elating.