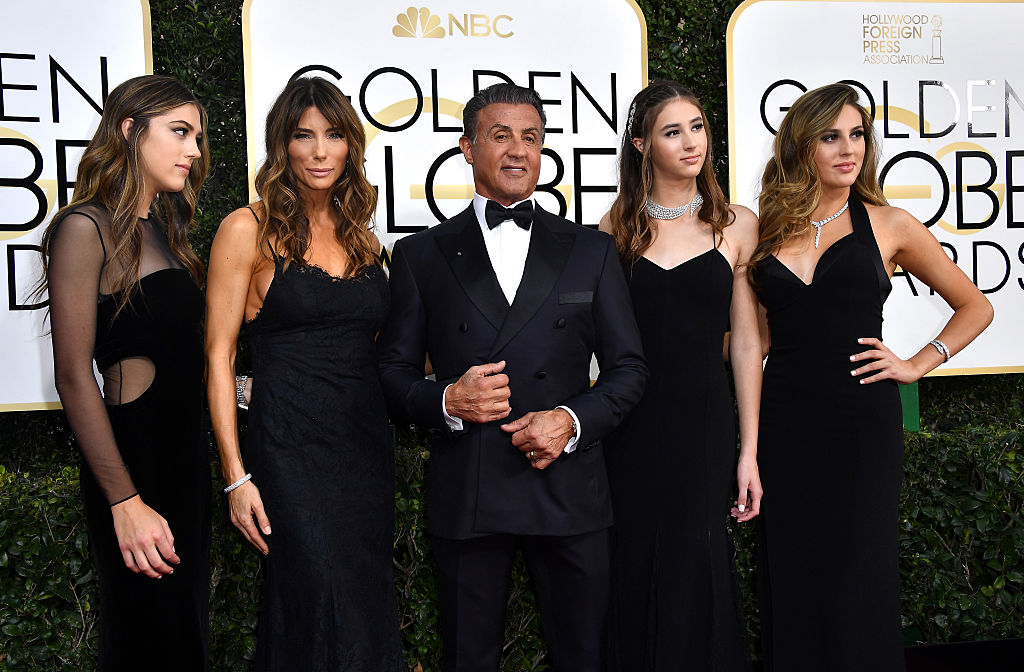 The 74th Golden Globes on Sunday night kicked off the red carpet season – one of the most scrutinized arenas when it comes to fashion.

There is no denying that the attire of the red carpet now plays an important role in the fashion world, often influencing what you will soon see in evening, cocktail and even the bridal industries.

There were many winning moments on this year’s Golden Globes red carpet. Awards should go to those young actors that brought their moms as their dates on their big night. And if ever there was an award for best dressed family, it should go to the Stallones (pictured above) with Sly looking sharp in his tux and surrounded by his wife and their daughters – all dressed in elegant black.

This year’s Globes, saw a few actresses break with sartorial protocol and instead of wearing the usual red carpet gown, opted for tuxedos, pantsuits and one Zoomer-aged actress went with a divine looking jumpsuit. We want to see more of these trail blazers! And while some young starlets showed up in gowns reminiscent of Disney princesses – some of the older and seasoned pros showed that when it comes to red carpet attire, they too can hold their own – regardless of fairy tale princesses hogging the limelight.

Here, we round up some of the best-dressed Boomers and why their outfits were winners. Kudos to Felicity Huffman for saying no to a typical big red carpet gown and marching to her own style beat in a Georges Chakra jumpsuit. The actress was one of a handful attendees at this year’s Golden Globes who opted for outfits other than gowns. In Huffman’s case, her white and champagne-coloured jumpsuit was proof that you can forgo a gown and still come up looking glamourous and elegant. The key to pulling off a jumpsuit look successfully (admittedly a tricky garment) is to go with pants that are fluid and loose rather than skin-tight. Also keep the top part of the jumpsuit simple like hers – just a v-neckline and a wide wrapped waist that acts like a tuxedo cummerbund, helping give your tummy a sleek smooth look. The woman who has been nominated some 30 times for a Golden Globe and once wore her wedding dress to her first Golden Globe years ago, wore a black gown to accept her lifetime achievement award this year. But for the beloved Meryl Streep, her black gown was anything but basic or boring. The bodice featured large cut crystals that formed florals at the shoulders and cuffs and the X formation from her bosom to her hips helped give the gown some sleek and svelte definition. That’s the trick about some black gowns – it can sometimes just be a giant black blob – but a few strategic details or embellishment can give it shape, an allure and help up the glam wattage. Animal prints, at times, can be a tricky print to wear. It can be aging or appear tacky. But Judith Light in a form fitting gown in a silver and black animal print looks absolutely dynamite and utterly glamourous. Why does this work on her? For such a powerful print, it is best to keep the gown form fitting and strikingly simple. With the wild print covered in dazzling crystals, there is no need for big jewels or accessories. She kept the look modern with her smoky eyes and simple earrings and let the printed gown do all the purring. Sometimes, striking simplicity can pack a deft and powerful punch. And this is how you do it. First pick a bright hue that suits you. Next, amp up the glamour by covering it in sleek sequins. Keep the shape simple and unfussy. Polish it all off by keeping accessories to a minimum like a single cuff and sleek and compact evening purse. Now go out and strike a pose like this award-winning actress in her shimmering lemon hued gown by Michael Kors Collection. One of the best paid actresses on television today, Vergara is unapologetic about her bombshell body. And why should she? She embraces it and flaunts it with her red carpet attire which always hit high notes on the glamazon scale with big hair, big gown, big bosom. But this year, she plays a slight restraint card. Poured into a gold embellished gown by Zuhair Murad, she looks every inch her usual screen goddess self. But there is a certain amount of modernity to her look. Her pulled back hair is restrained – instead of big billowing waves – and allows her beauty to radiate. And for once, we can’t help but be struck by her flawless and beautiful face. Nicole Kidman is red carpet royalty and always wows with her fashion choices, and this year is no exception as she appears in an Alexander McQueen gown. What’s interesting to note with her outfit is the romantic sleeves. Some women of a certain age sometimes feels the need to cover their arms and is often in search of evening attire with sleeves. What to keep in mind – instead of searching for traditional form-fitting sleeves – look for sleeves that not only provide coverage but also offer interesting style details – like this one. Leave it to a French woman to show how red carpet dressing can be effortless but still look glamourous. Here, the legendary actress wears an icy blue gown with an embellished top part. It’s strikingly simple yet utterly chic. How to get this lo0k – which is also timeless? First choose from colour palettes that are demure in hue. Keep the embellishment to the same tones and sparingly. Looking spectacularly age-defying, the lovable actress is soon to be seen back on the silver screen after a 14 year hiatus, holding her own comedic chops with Amy Schumer in the action/comedy, Snatched. But also holding her own in the style stakes on the red carpet, Hawn shows off her figure in an glamourous and svelte gown. Keeping it simple in all black, the actress keeps it a touch sexy by defining her waist, which was cinched in. And the off-the shoulders detail showed just the right amount of flesh – on the shoulders – one of those regions on the body that always look good despite age. Adding a top knot to her hair, adds a youthful vibe to this otherwise seriously glam gown. Dressed in a gown by Monse, the actress shows that a white gown can, literally, be fiery hot and sizzle on the red carpet. To keep it on the sexy side, your white gown should be column-like and skim the body. Show just a bit of skin, in this case, her lovely shoulders and a slit on the side of the gown to show a bit of leg. Add a smattering of gold sequins – in this case at the bottom of the gown to increase the glam effect. This is the other route to take a white gown – graphic and eye-catching. The easiest way to do that is to introduce black for constrast. These simple stripes add interest to her gown, helps elongate her figure and the one-shoulder and slit up the leg add subtle sexiness. Keeping her accessories in the same graphic and simple vein, she pairs the gown with a black envelope clutch and diamond cuff. Best thing about such a graphic gown – it’s timeless and doesn’t appear pinned to a particular season, year or trend.