Moses Znaimer On His Friendship With Leonard Cohen 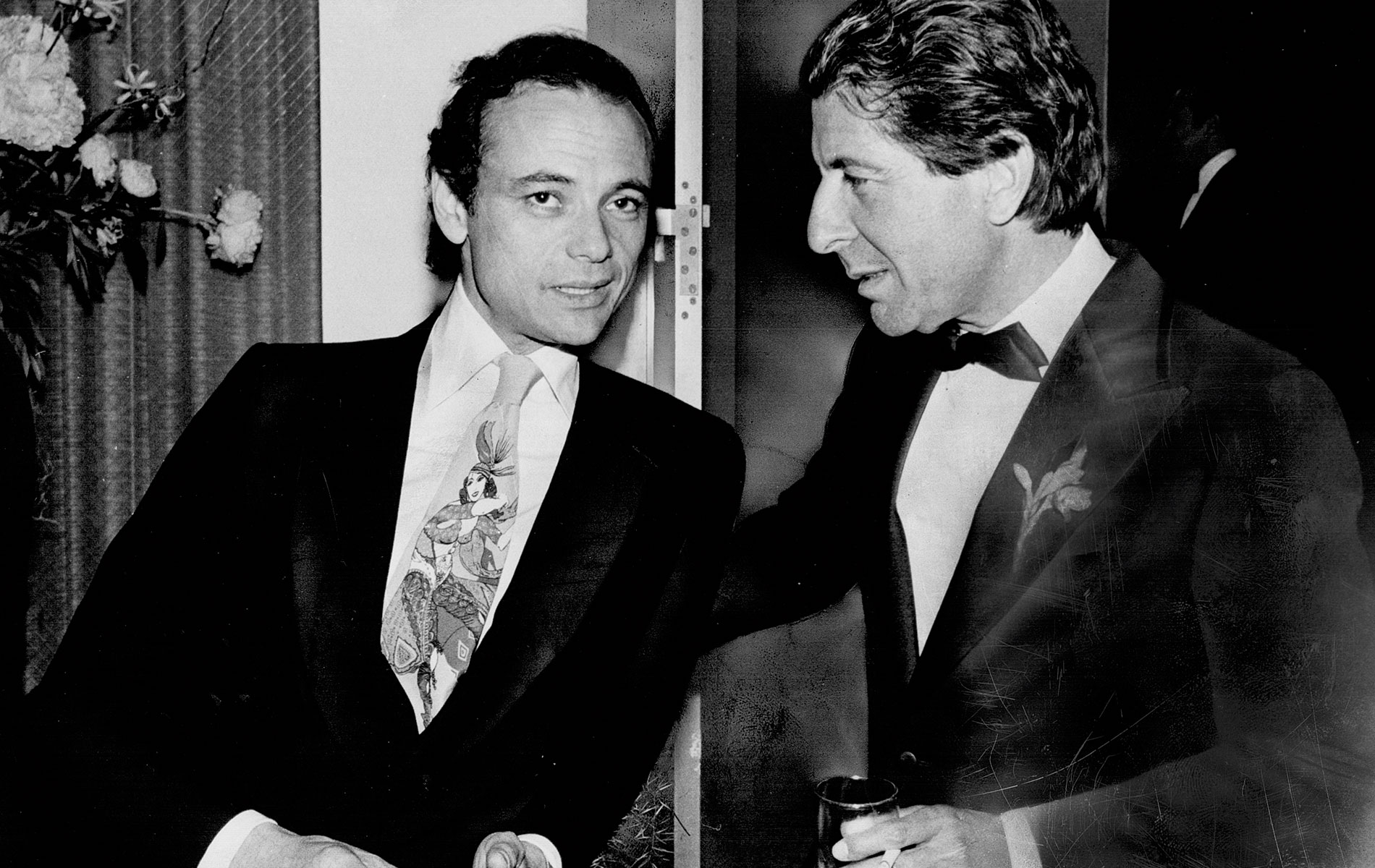 Photo: Moses and Leonard in the 1980s

The former Zoomer cover subject, who completed his final album with his son Adam while battling terminal cancer, is the only person over 45 up for Artist of the Year honours for this year’s Juno Awards. Here, Moses Znaimer writes about his friendship with the late Canadian music legend, Leonard Cohen.

Growing up my heroes were poets, novelists and revolutionaries who engaged actively in history. But Leonard Cohen helped me to understand the deep impact of the apparently simple, short song written from a distance.

I’m so taken by the wave of appreciation for Leonard. Finally. There were many years, decades, where the work that we today recognize as exhibiting genius received little or no recognition. And still he kept working. Many people quit when they’re persistently ignored, but, as I said when I inducted him into the Canadian Music Hall of Fame in 1991, his work is true. Of all the notable Canadian artists who’ve distinguished themselves over the past 50 years, I believe—in fact, I boldly predict—Leonard is the one who will last.

I’m flooded with lines of his that are appropriate to the moment because Leonard had a line for every moment of your life. In “Everybody Knows,” he has this very droll line and, the first time you hear it, you think it’s a little odd, but he says, “Everybody has this broken feeling, like their father or their dog just died.” So, a little broken, that’s how I’m feeling right now.

I met him in the company of my teacher Irving Layton, a Canadian poet of renown, amid a circle of writers and intellectuals in Montreal in the 1950s. You have to throw your mind back to that era in Canada. There was not much Cancon around. In fact, there wasn’t much culture in the country overall. Anybody of note who came to the nation’s capital in the 1950s had to play in a high school auditorium. It was before Centennial, before there was a conscious effort to build up the business of Canada expressing itself. But in Montreal, you could find a hothouse mix of French Canadian, Anglo and Jewish culture that spawned a new creativity.

I was still in high school, but Leonard was already out there—establishing and burnishing a myth as a loner and a lover. Of course, I identified like mad. He had just begun to sing, and I now understand just how profound was his insight to marry poetry to popular music or, at least, music that might become popular. His voice at the time was high-pitched and kind of whiny at the tone. In any case, I was more aware of him as a writer. We forget now that he wrote a couple of novels. Oh, and there was a class difference between us. I was St. Urbain Street and he was Westmount. But as I got to know him, all of that melted away, and our lives would intersect now and then over the years. On occasion, I could be of real assistance.

In 1992, while I was running that pioneering, youth-oriented music video channel MuchMusic, we began to play a certain 58-year-old Singer’s song called “Closing Time,” which he’d released in support of his then new album, called The Future. Up to that point, this singer’s albums had usually posted modest Canadian sales in the range of 30,000 to 50,000 records, while The Future ended up going double platinum (200,000 to 300,000) and relaunched that singer’s then languishing career. I remember record retailers calling up and saying, “What’s going on? I’ve got teenage girls coming in and asking for…Leonard Cohen?!?” That song, that video, that album helped mark the beginning of Leonard Cohen 2.0.

Next: When I first got a hold of AM 740 they didn’t play Leonard…

It’s instructive to remember that so many of the people and publications that now praise him routinely dismissed him for his nasal reedy sound, limited range, and lyrics of gloom. Montreal, which has studiously ignored in its monuments and memories the enormous contributions of its Jewish population, now talks of raising a proper memorial to him. But when, in 1983, I Am a Hotel, a pioneering Narrative Video made up of five of Leonard’s songs and voted that year as the Best TV Program in the world at Montreux, was offered to Radio-Canada, they rejected it on the grounds that Leonard was not “a Quebec artist.”

When I first got a hold of AM 740 they didn’t play Leonard either. At the same time, they would play pretty lame stuff that had to do with meeting the Cancon quotas. So, I would say, “Play more Leonard Cohen.” Eventually I insisted on an all-Leonard program. And I think we’re probably the only radio station on the planet that has not just played “some” Leonard Cohen, but “a lot” of Leonard Cohen over the years.

For me, Leonard is unique because people like Sinatra and Elvis seemingly blasted onto the scene full-grown; Leonard ripened. If you listen to his early albums, his voice was, as I mentioned, very different. His great accomplishment was that he kept at it, got control of his voice, acquiring a later-life lower register that was authentic, commanding and different. He took the time, sometimes years, to find the right words. He wrote elegant, smart, meaningful lyrics and married them to deceptively haunting music that lingers in the mind and in the air, especially about that human thing that none of us can escape. He remained true to himself, and eventually the world swung back to the beauty and the profundity of his work.

When it came to getting old and staying cool, nobody did it like Leonard. Leonard was 50 when he released “Hallelujah,” which would go on to become the most-covered song of the modern era. There are many lines to like in Leonard’s work, but the ones I think I love the most are the ones where Leonard speaks for me because of this trade we share, with its ambiguous connections to commerce and to art. I’m thinking of “Tower of Song.”

Yeah, my friends are gone and my hair is grey
I ache in the places where I used to play
And I’m crazy for love but I’m not coming on
I’m just paying my rent every day
Oh in the Tower of Song

Now you can say that I’ve grown bitter but of this you may be sure
The rich have got their channels in the bedrooms of the poor
And there’s a mighty judgment coming, but I may be wrong
You see, you hear these funny voices
In the Tower of Song

We would catch glimpses of each other over the years at industry events and in Montreal where he kept a place just off St. Lawrence Blvd. It was up the street from Schwartz’s. There was a little diner kitty-corner to his house, and as there was Beauty’s, a great breakfast joint on Mount Royal a couple of blocks away. And when we’d have a steak at Moishes, another iconic Jewish restaurant in Montreal, he got the table—the Leonard Cohen table, the corner table, which could survey the entire room, and which was otherwise reserved for wealthy businessmen and other grandees. I would also see him in L.A—once he came to a Passover Seder at my place there. He had a simple home in the L.A. flats and, if you visited him there, he was like a Jewish mother always wanting to feed you.

After he started on that last great worldwide tour, I barely saw him. The last time I sat with him at length was in L.A. I was there on business, and it was getting toward the end of the week, so I gave him a call. He said, “Tomorrow, when your work is done, come on over.” He gave me an address, which turned out wasn’t his house but a Korean restaurant that he frequented in the area. It was Friday night, Shabbat, The Sabbath; and there, at a long table, was Leonard, his gal, his son Adam, his son’s girlfriend and their newborn. There was bulgogi and kimchi and chap chae and there was challah, a delicious ritual loaf, halfway between bread and cake, which he then distributed in the manner of an old Rebbe, giving us each a chunk over which to say a little benediction. There was that Asian thing, his interest in Buddhism and matters of Eastern spirituality but, at the same time, he was a Jewish boy from Montreal. He liked to blend those things.

He was calm in the face of death. As a spiritual seeker, he’d been dabbling with the idea of death for most of his career. His most recent and last album, You Want It Darker, is his last statement. But his song, “Going Home” from his 2012 album Old Ideas, is, in my opinion, the perfect expression of what he knew was coming.

It’s stunning—he had a sense that he was getting close to his time and he told us about it. We were warned.
In that song, he also describes himself as “a lazy bastard, livin’ in a suit.” That was his uniform. But the most lasting image that I will always have of him is of a man in a room, a bare room, trying to write the perfect song.