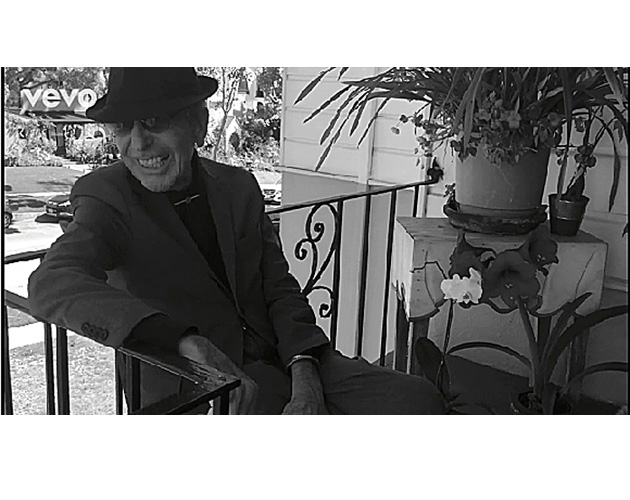 With the “excellent guidance” of the late Leonard Cohen’s son, Adam, artist Sammy Slabbinck—who designed the cover for the You Want it Darker album—has shared a touching memorial video to the track “Traveling Light.”

A soulful meditation on aging, the song provides a powerful backdrop to Slabbinck’s video which features archival and previously unseen footage of the Canadian troubadour.

The video opens with a shot of Cohen smoking a cigarette. “I feel a lot stronger, but I’m actually a lot weaker,” he says in the clip, in that unmistakable raspy voice. “I wake up in my bed and I feel like, ‘That’s how I used to feel.’ Not exactly but, you know. And then I swing my legs off the bed and I try to stand up!”

The remaining montage features both old and new footage of Cohen overlapping with the lyrics to his song: “I’m traveling light, it’s au revoir/ My once so bright, my fallen star/ I’m running late, they’ll close the bar/ I used to play one mean guitar.”

Cohen died in November 2016 at the age of 82, less than a month after releasing You Want It Darker.

As Adam Cohen told Rolling Stone prior to his father’s death, “At times I was very worried about his health, and the only thing that buoyed his spirits was the work itself. And given the incredible and acute discomfort he was suffering from in his largely immobilized state, [creating this album] was a great distraction.”