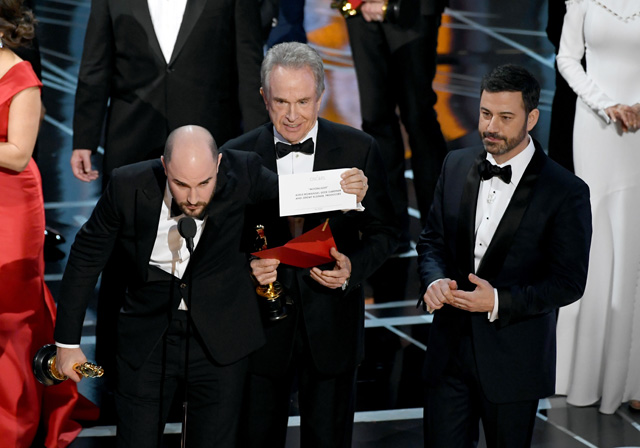 The 89th Academy Awards was a night of red carpets, gold statues, quips about an orange president and one massive Oscar mix-up.

Hosted by Jimmy Kimmel, the broadcast offered a mix of the hilarious and poignant, the political and comical, and, through no fault of their own, Warren Beatty, 79, and Faye Dunaway, 76, in a Bonnie and Clyde reunion, accidentally announcing the wrong film as the winner of the Best Picture award. We’ve included that memorable Oscar moment and more in a roundup of our favourite Oscar 2017 quotes…

“As you know, I don’t have to tell anybody, the country is divided right now. I’ve been getting a lot of advice. It’s time to bring people together. You have to say something. Let’s just get something straight off the top. I can’t do that. There’s only one “Braveheart” in the room, and he’s not gonna unite us either. Mel [Gibson], you look great. I think the Scientology is working. I really do.” — Jimmy Kimmel, during his opening monologue

“One actress has stood the test of time for her many uninspiring and overrated performances. Meryl’s phoned it in for more than 50 films. This is Meryl’s 20th Oscar nomination … she wasn’t even in a movie this year, we just wrote her name in out of habit.” — Jimmy Kimmel, teasing Meryl Streep, during his opening monologue

“I want to say ‘Thank you’ to President Trump. Remember last year when it seemed like the Oscars were racist?” — Jimmy Kimmel, taking a shot at 45, during his opening monologue

“Makeup is the art of ending an argument. When you’re about to get a divorce, and then you don’t, that’s the power of makeup.” – Kate McKinnon introducing the Achievement in Makeup and Hairstyling award.

“Thank you.” — 98-year-old Katherine Johnson, the former NASA physicist and mathematician whose story helped inspire the Oscar-nominated film Hidden Figures, on stage with the cast

“The last thing – I come from Italy. I work around the world. This is for all the immigrants.” — Alessandro Bertolazzi accepting the Oscar for Achievement in Makeup and Hairstyling and dedicating it to immigrants

“A special thank you tonight to my mother, Skippy O’Connell, who 39 years ago got me a job in sound. And when I asked her how I could thank her, she told me, ‘You can work hard. You can work really hard, and someday you can win yourself an Oscar, and you can stand on the stage, and you can thank me in front of the whole world.’ Mom, I know you’re looking down on me tonight, so thank you.” — Kevin O’Connell, 59, thanking his mother after winning the award for Best Sound Mixing, his 21st nomination in the category (his first was for Terms of Endearment in 1984)

“You know, there is one place that all the people with the greatest potential are gathered. One place. And that’s the graveyard. People ask me all the time ‘What kind of stories do you want to tell Viola?’ And I say ‘Exhume those bodies and those stories.’ The people who dreamed big and never saw those dreams to fruition. People that fell in love and lost. I became an artist and thank God I did because we are the only profession that celebrates what it means to live a life.” — Viola Davis, 51, accepting the Best Supporting Actress Oscar for her role in Fences

“I’m sorry I’m not with you tonight. My absence is out of respect for the people of my country and those of other six nations whom have been disrespected by the inhumane law that bans entry of immigrants to the U.S. Dividing the world into the ‘us’ and ‘our enemies’ categories creates fear, a deceitful justification for aggression, and war. These wars prevent democracy and human rights in countries which have themselves been victims of aggression. Filmmakers can turn their cameras to capture shared human qualities and break stereotypes of various nationalities and religions. They create empathy between us and others—an empathy we need today more than ever.” — Iranian director Asghar Farhadi, in a statement after winning Best Foreign Language Film for The Salesman

“I now pronounce you husband and wife. You may kiss the bride.” — Denzel Washington mock-marrying an engaged couple who were part of a Hollywood tour group that was unknowingly marched through the Academy Award broadcast

“I’m at the Oscars with Michael J. Fox, a DeLorean, while wearing future shoes. All I have to do is sing the Schuyler Sisters song from Hamilton in front of the world and I’ll have completed my entire bucket list.” — Seth Rogan, with fellow Canuck Michael J. Fox, 55, before proceeding to sing the aforementioned song

“This is not a joke. Moonlight has won Best Picture.” — La La Land producer Jordan Horowitz, after accepting the award for Best Picture, upon being told that it was a mistake and that Moonlight had actually won the top prize