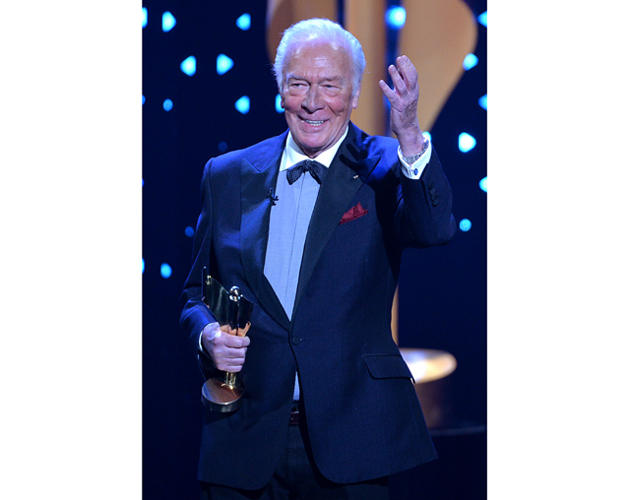 The Canadian Screen Awards paid tribute to veteran Canadian actor and Oscar winner Christopher Plummer, who was on hand to accept his Lifetime Achievement Award.

Comedian Howie Mandel hosted Sunday’s gala in Toronto, but it was the 87-year-old Plummer who stole the show with a hilariously heartfelt acceptance speech.

In accepting the Lifetime Achievement Award, presented by director Atom Egoyan, with whom Plummer worked on the 2015 film Remember, the actor self-deprecatingly declared, “Quite obviously the awards committee used my name out of pity: ‘You better give it to him now before he croaks.’ And they’re absolutely right, I mean, I’m old. Dangerously old! I’m so old that when I was a baby the first word I uttered was in Latin.”

The legendary stage and screen star, and two-time Zoomer cover subject, noted that, “I’ve spent almost 70 years making a fool of myself in this crazy, mad profession of ours and I’ve had the time of my life” before capping his speech on a poignant note: “The curtain has not yet fallen. It’s simply stuck.”

Joining Plummer on the list of boomer honourees for the evening was Tantoo Cardinal, 66, the indigenous film and television actress who received the Earle Grey Award, which is “presented to an actor or actress whose body of work in Canadian television has had an exceptional impact on the strength of our industry at home and around the world.” The Academy of Canadian Cinema and Television says she, “single-handedly advanced Aboriginal performing arts throughout the world. Born Métis, Cardinal has blossomed into one of, if not the most, widely recognizable and most renowned Native actresses of our generation. And while her film and television credits have garnered her numerous awards—earning her the 2015 ACTRA (Alliance of Canadian Cinema, Television and Radio Artists) Award of Excellence—it is her unequivocal dedication to the Indigenous community that truly portrays who she is as a person.”

The Alberta native, who appeared in the film Dances with Wolves and TV show North of 60, among many others, accepted the award and declared, “I felt the breaking hearts of injustice and the loving laughter of survival. They kept me moving forward, in the hopes that our stories would be told. And you know what? It looks like it’s happening.”

Other big boomer CSA 2017 winners include Catherine O’Hara, 63, who took home the award for Best Actress in a Comedy Series for the hit series Schitt’s Creek; Paul Sun-Hyung Lee, 45, who won Best Actor in a Comedy Series for Kim’s Convenience; Daniel MacIvor, 54, who won the Best Original Screenplay award for Weirdos; and The Tragically Hip, who nabbed the Best Performance in a Variety or Sketch Comedy Program for their bittersweet farewell concert with frontman Gord Downie, The Tragically Hip—A National Celebration.

Click here for a full rundown of the winners and festivities from the 2017 Canadian Screen Awards.