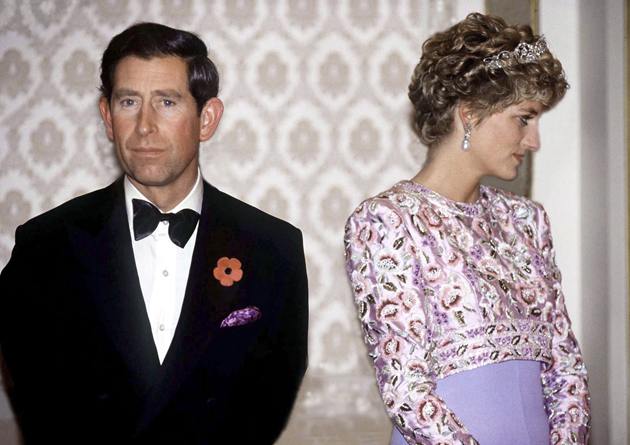 Prince Charles wept over losing Camilla on the eve of his wedding to Diana and brought his own food with him when visiting friends, according to stunning gossip from Sally Bedell Smith’s new bio on Prince Charles.

Information on Charles: The Passions and Paradoxes of an Improbable Life by bestselling author Sally Bedell Smith was recently revealed in a Daily Mail exclusive report.

Among some of the juicier items revealed in the Daily Mail article:

“Charles only married Princess Diana because his father sent him a threatening letter telling him to propose because her [Diana’s] ‘reputation was on the line.'”

“Charles panicked when he got the note from Prince Philip amid fears in the royal family that his indecision had ‘impugned’ her [Diana’s] honour.”

“He thought that Philip, who communicated with his son by letter and not by speaking to him, was issuing him an order that said: ‘You’ve got to get engaged.'”

According to family friend Pamela Hicks, Charles “wasn’t in love, he wasn’t ready…”

But the Royal Family insisted that Diana Spencer was the ideal match for Charles—especially since she “lacked a romantic past.”

“Charles wasn’t in love with her, but thought he could grow to love her.”

“Meanwhile, he was ‘powerfully attracted’ to Camilla, but ‘conventions of the time called for an heir to the British throne to marry a woman who at least appeared to be virginal,'” Bedell Smith writes in her book.

The Daily Mail also reveals that, in the “riveting” book, Bedell Smith writes that “Charles and Diana were a terrible match from the start of their union and how, during their rows at Kensington Palace, Diana used to taunt Charles that he would ‘never be king’, knowing it caused him deep consternation.”

Bedell Smith claims that Diana used to hit Charles over the head when he knelt down to pray by their bed at night—and continued berating him during his prayers.

“The book portrays Charles, 68, in an unflattering light and writes that he and his staff ‘dealt with Diana’s bewildering and often infuriating behavior by placating her, trying to distract her and, ultimately, out of frustration, abandoning her.'”

“‘Camilla was an upper class girl and the daughter of a British Army officer with a low, husky voice.”

“Charles adored how Camilla ‘always listened’ to him, Bedell Smith writes, and in her he ‘found the warmth that he yearned for.’ But it wasn’t to be because Charles was not ready to settle down with her at the age of 24.”

“The conventions of the time called for a princess to be virginal, or at least appear so, and Camilla ‘had a history’, as Mountbatten put it, ‘and you didn’t want a past that hung about.'”

“Even though Camilla married another man, Andrew Parker Bowles, her affair with Charles would continue for much of his marriage to Diana.”

“By the time Charles reached the age of 30, the pressure to get married was intense and, after a series of flings, Diana entered his life.”

“Diana went through violent mood swings, self-absorption, and ‘disconcerting detachment’ from events in the outside world. She was lost in self-pity and began stalking Camilla.”

“According to Bedell Smith she was in the wrong place at the wrong time—and she married the wrong man.”