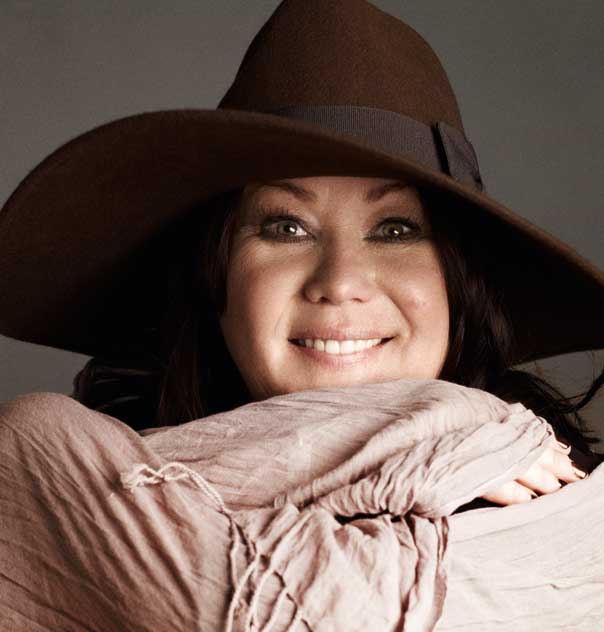 To mark her 55th birthday, we look back at our famous 2012 cover story with singer Jann Arden.

As she turns 50, Jann Arden, the Juno Award-winning singer-songwriter, tells Zoomer like it is, amping up her humorous damn-the-torpedoes honesty. Birthday suit included.

There is not one part of my brain – or my body, for that matter – that says, “I can’t believe that I’m 50” because I really, truly, absolutely can believe that I am indeed 50 years old. I feel like I have roamed the planet for an eternity. I can’t remember not being here. I have to tell you, I don’t mind getting older one little bit. I am relieved. I am overjoyed. I am grateful. I don’t mind the extra chin or the shorter neck or the crow’s feet, legs and wings that make their way slowly across my face. I don’t mind standing in the middle of the kitchen with the refrigerator door wide open thinking that I am going to find my reading glasses sitting there on one of the glass shelves only to realize that what I was really looking for were my car keys that I swear I just had in my purse that I set down on the table beside the back door when my cellphone rang… What was I saying? I don’t mind one single thing about getting older. No, I don’t.

I seem to somehow get through the sudden fiery hot flashes that prompt me to attempt frying eggs and bacon on my very own chest. If I had room to flip a few pancakes, I’d probably do that, too. I’m trying to go green anyway. I’ll just make the best of it. Yes, I will. I’ll be my own nuclear power plant! Maybe I could sell the excess energy to the city.

My little five-pound dog doesn’t mind when I pick her up from a dead sleep and fan myself wildly with her until the sweaty red-hot flash passes. She’s happy to help. I know because she barks a lot and tries to give me tiny sharp love bites to cheer me on. She’s such a supportive little soul. I do my best to quell the steam pouring off my body but sometimes the smoke alarm ends up being set off in my house (or my hotel room), and fire trucks are more than likely dispatched to save me from what must be a large structure on fire. Nope, it’s just me being 50 and loving every minute of it.

I love the fact that I, at 50, am finally able to cry (without any embarrassment) at feminine protection commercials where the girls are doing gymnastics and riding horses and roller skating and laughing whilst jogging in their white spandex yoga outfits. It’s so great to not have one shred of envy in my aging body. Not-a-one. Nuh-uh. Youth is wasted on the young, I say.

And now that I am officially 50 (that’s a cool half a century), maybe once in a blue moon I cry, let’s say – at a Coke commercial that involves cute polar bear cubs that guzzle the stuff like they won’t be making it anymore. I might find myself blubbering at that dog food commercial, the one with the dozen or so fat tan golden retrievers that roll down the grass into the arms of an adorable child that doesn’t seem to have a care in the world… And maybe on the occasional occasion, I cry at a Tim Hortons commercial about hockey dads. But that’s it. That’s where I draw the line. Other than that, I hardly cry at all. What did you just ask me?

As I was saying …

The funny thing is that I didn’t do any of these things when I was 49. I was completely normal at 49. I was. I never forgot anything. I was never hot unless I was hot on purpose, like when I was lying in the sun on an Italian vacation. I only opened the fridge when I wanted a beer or a teeny tiny piece of cheese or some cold KFC. When I was 49, I had one chin and two eyebrows and a moustache that was manageable.

Did I mention that being 50 is a triumph? Because it is. I have been here long enough to witness the technological revolution. My mother still thinks that an iPad is something a girl should lock away in the bathroom in a secret drawer just in case there are any gentleman callers.

By the way, the mother tells me that I am beyond being an old maid. She says she is not sure what the name for me is. She said she would ask around. I don’t think I want to know what the name for me is. Cougar was a phrase that was thrown around for a while, but apparently I outgrew that some time ago. There are murmurings now of panther and puma. For the love of Gordon, what does any of it mean? I am quite fine with broad or babe even. I don’t bat an eye when somebody calls me ma’am. Well, that’s a lie. I do bat the one eye. The other one can’t bat an inch because of the Botox, but I don’t want to get into that right now.

Botox – perhaps we could go there for just a minute. It’s like going to the dentist only it’s not your mouth that gets frozen. It’s your forehead and if you’re not completely in the hands of an experienced professional, one of your nostrils may also not budge for six or seven months. I am not saying that that’s what happened to me, no. It was a friend of mine who I go to group therapy with (it’s cheaper if you can find two or three people with similar problems to your own).

I just realized as I sit here writing this that I have to pee again. Didn’t I just go? Did you just say something?

Where is my cellphone? I should probably check the freezer before I head out for my session. It’s not what you think. Everybody should get mental checkups now and again. You don’t want to have things looming around in your mind where they don’t belong. When you’re 50, well, it’s the perfect time to do some cranial housekeeping. I like to gather up old memories that I don’t use anymore to make way for the newer, more “betterer” memories that I haven’t made yet but will make as soon as I have time to slow down and smell the roses. I was thinking of ditching a few of my high school friends finally, as well. I mean, 40 years of talking about the same damn things? It’s a little junior high, don’t you agree?

My God, how did it get to be 7:30 at night? I should get to bed. If I don’t get a good solid 12 hours of sleep, I am of no use to anybody. Make that 14 hours, but I digress … If there is one thing that I have learned in these past five decades, it is to laugh. Laugh, laugh, laugh. I have always been able to look at my life and see the profound humour in even the darkest of days.

And what days these have been. I feel beyond blessed. I have somehow managed to keep my wits about me for all these years. Some moments have had me holding my breath and praying for salvation, and others have had me weaving my way in and out of the very stars that hang in the black endless sky above my head. I have really tried to live a good life. I have enjoyed my friends and most especially my family. I have loved all the moments. Good, bad and otherwise. Before I go (no, I am not dying, Mother), I should tell you that this past year has been a marvel for me. I wrote a memoir called Falling Backwards, which you should read on a beach somewhere – or in the bathroom with the door locked. I also recorded my 12th record, entitled Uncover Me 2. I sang songs that I grew up singing. In fact, these are the very songs that taught me how to sing at all. A full-circle Lion King kind of moment.

An inventory of the year’s marvels would also have to include posing in the nude for this magazine. Which raises the question of why ?

It appealed to my sense of frustration with body image in mainstream beauty and fashion, something I have always been passionate about: the fact that most of us normal women are marginalized and set aside for not looking a certain way. Doing a nude shot would make a huge statement. So, for the first time and perhaps the last, I took my duds off. Scared? Yes, but somehow relieved to be able to say, “Hey, women of the planet Earth. Love thyself right now. Don’t wait until it’s too late!”

So, at 50 years old, my butt and all the bits and pieces attached to it are out there walking the walk.