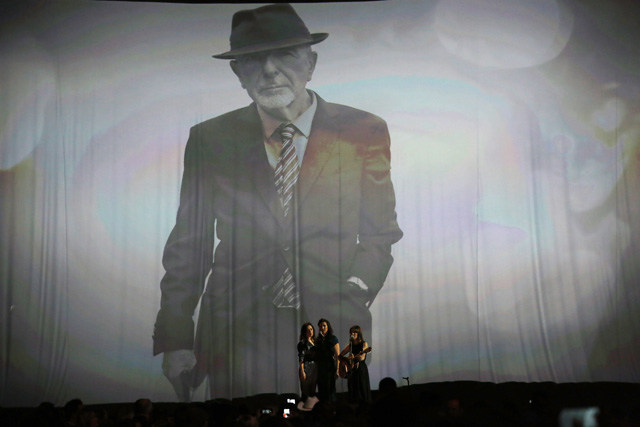 Fittingly, in a year when Canada, as a nation, reflects on 150 years of our shared history, the 2017 Juno Awards proved a celebration of Canadian music past, present and future. Artists like Leonard Cohen, Gord Downie and The Tragically Hip, Sarah McLachlan and host/performer Bryan Adams dominated the evening alongside today’s top pop acts and provided some of the evening’s most memorable moments—all which you can watch in the videos below.

Comedian Russell Peters, 46, and rock legend Bryan Adams, 57, who took over Juno hosting duties for Michael Bublé after the Canadian crooner announced his young son Noah was battling liver cancer, kicked off the broadcast with a backstage comedy sketch that included a cameo from Canadian Prime Minister Justin Trudeau.

Peters eventually took the stage, decked out in a royal blue, to open the live show with a short standup routine that took aim at everyone from Justin Bieber to U.S. President Donald Trump before welcoming Adams, who got a few good jabs in at Peters himself.

In one of the evening’s most touching and talked about moments, Prime Minister Justin Trudeau and his wife Sophie Grégoire Trudeau honoured the late Leonard Cohen, who died last November at age 82, calling him “one of the greatest artists Canada has ever produced” before the Prime Minister recalled the time he attempted to hug Cohen at his father Pierre Trudeau’s funeral.” Leonard—great man, but not a big hugger.” They then introduced Feist, who performed “Hey, That’s No Way to Say Goodbye” in a tribute to the late troubadour.

Leonard Cohen took home two Junos for his final, haunting album You Want It Darker—Artist of the Year and Album of the Year—topping the likes of megastars Drake, The Weeknd, Celine Dion and others in the process. The latter of the two awards was handed out on Sunday’s broadcast and Cohen’s son Adam, and grandson Cassius, accepted. “My father said that he saw a Juno in my future,” Adam Cohen quipped. “Of course, it was his.”

Bryan Adams didn’t just host the show, he also took to the stage with his band, rocking the crowd with “You Belong to Me,” a single from his 2015 disc Get Up.

In what was simultaneously one of the most exciting, and most disappointing, moments of the night, the Tragically Hip’s Rob Baker and Paul Langlois accepted Group of the Year honours on behalf of the band, only to have their acceptance speech cut off … by their own music.

As Langlois spoke, the Hip’s “Ahead By A Century” played over him, to which the rocker replied, “Keep going. I’ll go to commercial. This is my arena, not yours,” referring to the fact that the band had played the same Ottawa venue last summer as part of their national farewell tour. Then, just as he began to discuss Gord Downie, the band’s lead singer, who is battling terminal brain cancer, they cut his microphone and went to commercial. Though surely not intentionally crass, the fact that the Junos couldn’t give a few extra seconds to one of Canada’s most beloved bands making what might be their final award acceptance speech ever is mindboggling and unacceptable. Nevertheless, it was a thrill to see the band feel the love from the crowd, if not the show’s director, one more time.

Gord Downie, who himself took home three awards this weekend for his highly-lauded solo album Secret Path, including Songwriter of the Year, appeared in a video to accept the honour. In his speech he thanked fans for helping to spotlight the horrifying conditions faced by First Nations people in Canada, as well as the story of Chanie Wenjack, the 12-year-old boy who died after running away from a residential school in 1966 and who serves as the inspiration for Secret Path. “This award is to all of us, bent on love and trying. Thank you from me … the man who walks among the stars.”

The evening also saw songstress Sarah McLachlan receive one of the nation’s highest musical honours when she was inducted into the Canadian Music Hall of Fame.

Along with her acceptance speech McLachlan also performed one of her hit tunes, “World On Fire.”

To close out the show, McLachlan, Alessia Cara, Billy Talent and others joined Bryan Adams for an ensemble rendition of his classic “Summer of ’69.”

For all of the Juno winners, visit www.junoawards.ca.