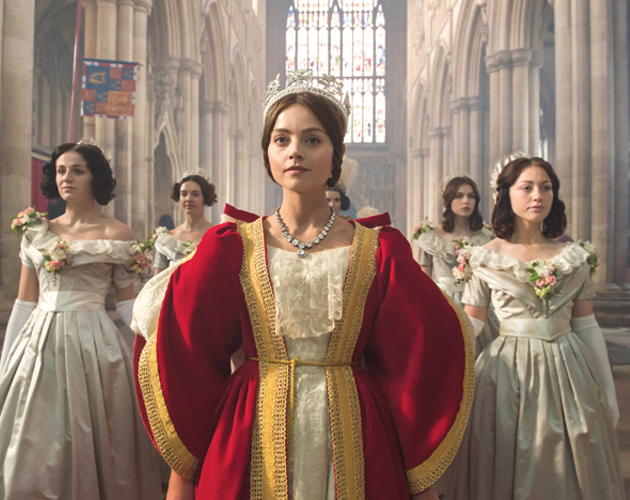 Royal madness is descending upon the airwaves once again with Victoria, a series that gives fans a glimpse into Queen Victoria’s younger years—starting when she was crowned at the age of 18.

The publics obsession with the British monarchy shows no sign of abating. What with Netflix’s prestige production, The Crown, picking up awards left and right, and the cheeky hit, The Royals, on E!. Add in the speculation about Prince Harry and American actress, Toronto-based Meghan Markle and the ongoing fascination with Prince William, Kate, Prince George and Princess Charlotte and we are a society that is royal mad.

Tossing its tiara into the ring is Victoria, a lavish new series from the producers of Poldark, airing on April 4 at 8pm ET/5PT on VisionTV (owned by ZoomerMedia) and created and written by British novelist Daisy Goodwin. The pilot opens the morning that the diminutive royal (she was only 4 foot 11) wakes up to learn her uncle, King William IV, had passed away making her queen at 18.

This new portrayal is in stark contrast from the dour figure dressed in black we’ve seen before, such as in the 1997 film Mrs. Brown that starred Dame Judi Dench. Though perhaps our first glimpse at the queen as a girl came when Emily Blunt starred in 2009’s The Young Victoria.

Our interest in royalty, especially princesses (including those of the Disney variety), is as long as history itself. Particularly the last century, with its tales of abdication, a man who didn’t want to be king and his daughter who inherited the throne. Not to mention a certain fairytale marriage that played out as public scandal, courtesy of Charles and Diana, and punctuated by her untimely death in 1997. All to say that the royal family remains front and centre in the minds of the public, and for artists who look at the institution and find inspiration.

The award-winning writer Peter Morgan has made a career out of Elizabeth II – from his Oscar-winning film The Queen, to the hit West End and Broadway play, The Audience, and now, he has turned back the clock to the young Elizabeth for The Crown. He has never met the Queen and has said in interviews that his attraction to the Royal Family is political, not personal. “Through her eyes, you can see the entire second half of the 20th century.” And in Morgan’s view, the family is to be sympathized with. “That’s the imprisonment of the institution. And the suffering of the family ripples out from the crown, inflicting profound abuse on people upon whom it’s assumed it only projects luxury. It’s a hideous thing for them. But as a drama, it’s got everything.”

For Goodwin, she sees the strength of Victoria as relevant to today’s young women who may find a kindred spirit in the young Royal. “I think Victoria was never afraid to be herself. She spoke her mind and she negotiated the difficulties of having a job, a husband and nine children,” Goodwin says. “I think viewers also like the tight moral code, the fact that people can’t always be with the person they want. On the other hand, the viciousness of the politics in Victoria feels very modern.”