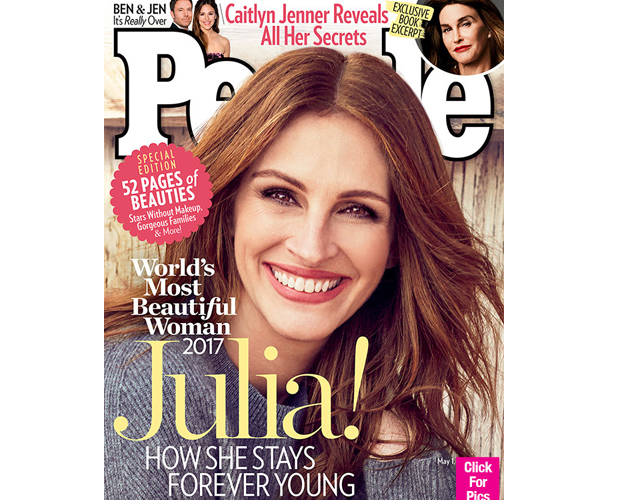 People magazine has crowned Julia Roberts, 49, as 2017’s most beautiful woman in the world.

When Oscar-winner Julia Roberts first graced the cover of People‘s World’s Most Beautiful Woman issue, she was only 23 years old. Now, 26 years later, at the age of 49, she’s the second-oldest woman to receive the honour. (Sandra Bullock was 50 when she was named World’s Most Beautiful Woman by the publication in 2015). “I am very flattered,” Roberts told People magazine. The actress has previously claimed the cover spot a record five times: 1991, 2000, 2005, 2010 and, now, 2017.

Her fifth appearance on the cover means she has continued to best close Hollywood friend George Clooney who received the Sexiest Man Alive honours twice. “I’m going to mention that in my Christmas card to the Clooney’s this year,” she joked.

Looking forward 26 more years, Roberts says she hopes she ages gracefully and looks forward to spending more time with her family. “If I can watch my kid’s grow up and realize their dreams and, hopefully, have little creatures for [husband] Danny [Moder] and I to spoil, well that’s what the winter of life is supposed to be about,” she said.