Royals Open Up About Mental Health Struggles in Candid Video 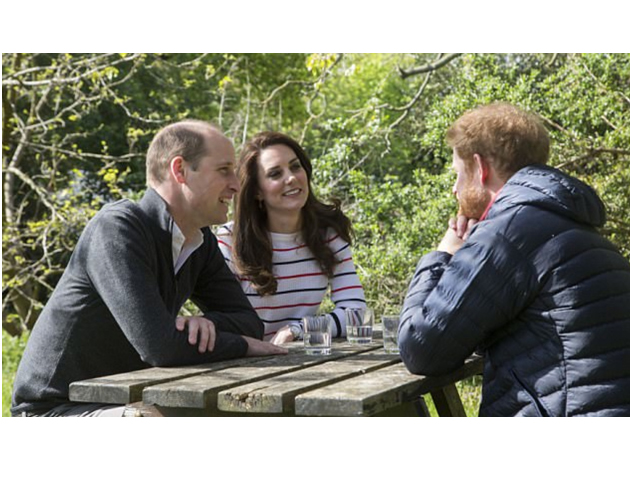 In the new video, Princes William and Harry and the Duchess of Cambridge discuss mental health issues ahead of the London Marathon.

Once upon a time, members of the Royal Family were expected to toe the line and shield their true feelings from the public. And who can forget the solemn faces and downcast eyes of a young William and Harry as they “put on a brave face” and walked behind their mothers’ coffin back in 1997?

But now, on the eve of the 20th anniversary of Princess Diana’s death, those same young royals are leading the charge to erase the stigma attached to mental health issues with their Heads Together campaign. And, if Diana’s sons have any say in it, the time for masking emotions has come to pass.

The recent video footage released by Heads Together captures a candid conversation between Princes William, 34, and Harry, 32, and the Duchess of Cambridge, 35. The trio are gathered around a picnic table on the grounds of Kensington Palace to discuss topics they previously would have avoided sharing with the public.

Both William and Harry admitted that they didn’t share their feelings with one another following the sudden death of their mother. “We’ve never really talked about losing a mum at such a young age,” Harry reveals in the video. “I always thought to myself, ‘what’s the point of bringing up the past, what’s the point of bringing up something that’s only going to make you sad? It ain’t going to change it, it ain’t going to bring it back.’ And when you start thinking like that, it can be really damaging.”

The princes revealed they’d only recently recognized the value of “simple conversations” to begin the process of healing—something they actively avoided after years of burying their grief about their mothers’ death.

The Duchess of Cambridge took a moment to pay tribute to Princess Diana’s legacy by applauding her parenting skills, and crediting it as the reason why her sons have coped so well.

“Considering what you boys sadly went through, the trauma that you experienced…I think it’s incredible how strong [you are] and how you’ve been able to cope, really,” she said. “I put that down to your really early years, your childhood experiences.”

The princes, in particular, have had a busy April. Earlier this week, Prince Harry revealed in a podcast interview that he finally sought grief counselling four years ago, while Prince William released his own video the following day in which he spoke with pop star Lady Gaga, via FaceTime, about her own struggles with post-traumatic stress disorder after a sexual assault.