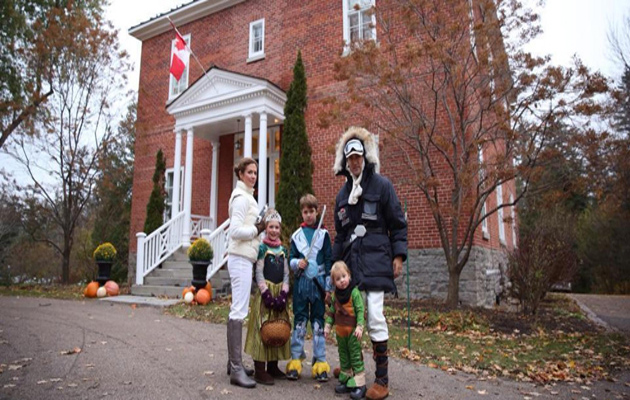 May the 4th be with you! We can’t resist looking back at the Trudeau family’s Halloween 2015 costumes in honour of the annual social media celebration. (Don’t believe us that it’s a big deal? Check #MayThe4thBeWithYou or #StarWarsDay for proof!)

Prime Minister Justin Trudeau and wife Sophie Gregoire-Trudeau went as Han Solo and Princess Leia, while their three little tykes joined in the fun. Eight-year-old Xavier was dressed as a bird, six-year-old Ella-Grace was dressed as Princess Anna from Disney’s Frozen and 19-month-old son Hadrien went as a member of the Ninja Turtles—Leonardo, judging from the blue eye mask.

And that wasn’t the only time the Trudeau family showed their affection for the sic-fi franchise. The Trudeau tykes even had themselves a little lightsaber battle on Election Night this past October.

Not to be outdone, the Obamas celebrated Star Wars Day by dancing to Bruno Mars’ hit song, “Updown Funk” with none other than R2-D2 and a Stormtrooper.