Between the Lines…With the Stars of Bon Cop, Bad Cop 2 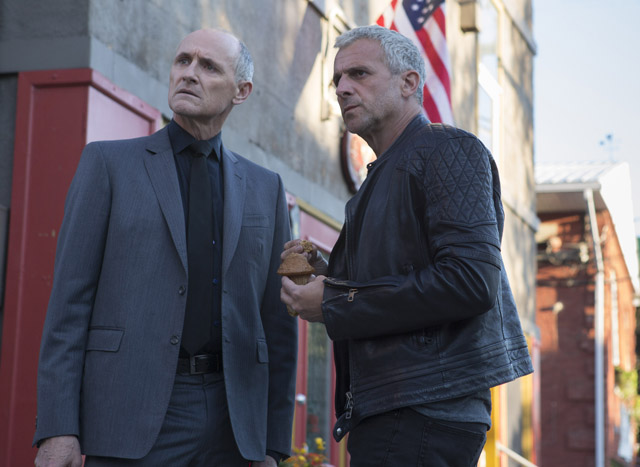 Colm Feore and Patrick Huard talk Canadiana, aging, and playing action heroes in the sequel to their bilingual blockbuster.

In August, 2006 a bilingual buddy comedy about two cops – one from Ontario and the other from Quebec – forced to work together to capture a hockey-obsessed serial killer hit Canadian theatres. Complete with French dialogue and running jokes riffing on both anglo and francophone culture, Bon Cop, Bad Cop was only a beaver and a bottle of maple syrup short of earning the distinction of “most Canadian film ever made.” Its more than $12.5 million (Canadian) box office did, however, earn a far more tangible distinction – the title of highest grossing domestic Canadian film ever.

The sequel, Bon Cop, Bad Cop 2, hits theatres May 12, re-uniting the first film’s featured pairing – Can-American stage and screen actor Colm Feore, 58, who’s starred everywhere from Stratford to House of Cards, and Quebecois actor Patrick Huard, 48, who also wrote and produced the sequel – though this time the tension comes courtesy of working with their American counterparts. Feore and Huard recently spoke with Zoomer.

MIKE CRISOLAGO: The first Bon Cop, Bad Cop was such a huge success and now you’re back ten years later. Did you expect the first one to be so successful?

COLM FEORE: No idea that it would succeed at all, especially because it had no pretentions to being what we had come to understand of a Canadian movie. There wasn’t a lot of profound Canadian sentiment except there was a great deal of day-to-day Canadiana, like what real Canadians have to go through. And so that really connected with people, and that was not something I could’ve ever predicted. If you sat in a bilingual audience, they laughed at different things, but they then turn over their shoulders and look at each other and laugh again. “Well yeah, you are a bit of an idiot.” “But you too are a moron.” “Well yeah.” And people are still using it as a template for how to swear in French, how to talk about French/English relationships. So coming back to it 10 years later, I swear to you we just showed up and somebody said, “Action,” and we felt exactly the same, the same sense of humour, the same physicality. Like twin choreography.

MC: The new film, which deals with tensions between Canadians and Americans, was written and shot before last year’s U.S. presidential election. Given all the political craziness that’s gone on since, does the film take on new relevance now?

PATRICK HUARD: Actually I think it does. I think it makes it more real, more sometimes funny but sometimes more like twisted. But it definitely sounds and feels more real now than it does when first wrote it. Some people said –

PH: It’s humour and drama; you have go [a little] further than the extreme, the “real” stops making it entertaining and funny. And the only thing I fear now is that it’s less [funny] because it’s less exaggerated.

MC: Colm, you’re 58 and Patrick, you’re 48. How much fun is it to play action heroes at ages that most don’t usually get to play them? And do your ages add a new dimension to the story?

CF: I think it does enormously. I think one of the advantages we have is that we are 10 years better. Yes, we’re 10 years older but we’re better actors so there’s a kind of a shorthand. We’re a bit more elegant in what we do. When you have to make choices about the expenditure of energy, you make the good choice. And I think that’s encouraging to people over 45, right? Yes, you to have to winch yourself out of bed in the morning and the coffee is really, really strong, but once you get going the sh*t you accomplish is really elegant and deft.

PH: And on a dramatic point of view, those two characters, they are more sensible, they’re tired. You can see that they have more of their shoulders in terms of what they’ve been through all of those years doing this job. It made them better at some stuff and more clunky. And also I think it tells something cool that you can age onscreen and still be a cool guy.

CF: And because Patrick was the producer, writer and star, he gets sex. And as the guy who come along and holds his cup, I don’t. So it gives one hope. Especially when Moses said in Zoomer that nobody wants [sex] anymore and only three of us are having it and two of us are lying. I was very encouraged.

MC: How does such a quintessentially Canadian film fit into the overall celebration of Canada 150?

CF: Wow. Well, there is something really obviously Canadian about Bon Cop, Bad Cop. It doesn’t pull any punches about being a Canadian scenario on a Canadian landscape with Canadian people doing a Canadian story. So it really is us.

PF: [People] talk to me on the street and they say Bon Cop, Bad Cop is my favourite movie. And they’re telling me where they were, with whom that they watched it, and sometimes they’re playing some scenes of the movie to me, which I think is great. I remember that scene but the guy is playing me in front of me because he made it his. It’s his movie and I think it’s beautiful.